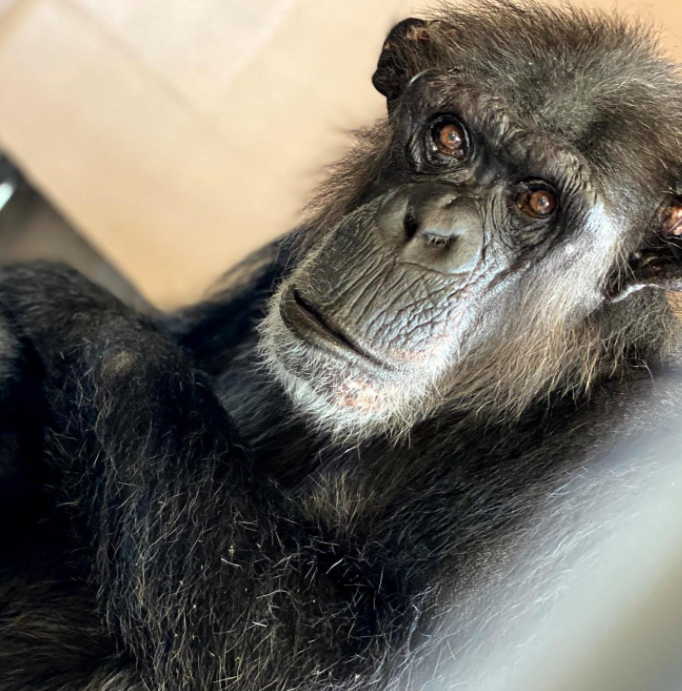 Hello, my name is
Tinker

Many details of my early life are unknown, but I was most likely born in Africa around 1970. I was likely taken from my mother as an infant and imported to the United States, as this was still legal in the early 1970s. I arrived at the Holloman Air Force Base in 1978, where I was placed in a laboratory breeding program at approximately 10 years old. I was later transferred to the Coulston Foundation, an affiliated laboratory with extensive Animal Welfare Act violations. I gave birth to six chimpanzees, many of whom also later retired to Save the Chimps, including Vanna, Pele, Roady, and Bell. Unlike many chimpanzee mothers in the breeding program, I was typically allowed to rear my infants without human intervention for around 2-3 years each.

My last baby, Bell, was still nursing when Save the Chimps rescued us chimpanzees living at the Coulston Foundation. Finally, I was able to keep a lifelong relationship with one of my children. I still live with Bell today and remain a caring and attentive mother despite the fact that she is now a fully grown chimpanzee. Me, my daughters, and my granddaughters all have spunky personalities that seem to run in the family. I relish my retirement and all the choices that come with it. Whether relaxing on my island or taking a nap in my cozy indoor housing, I can always be happy with my family.