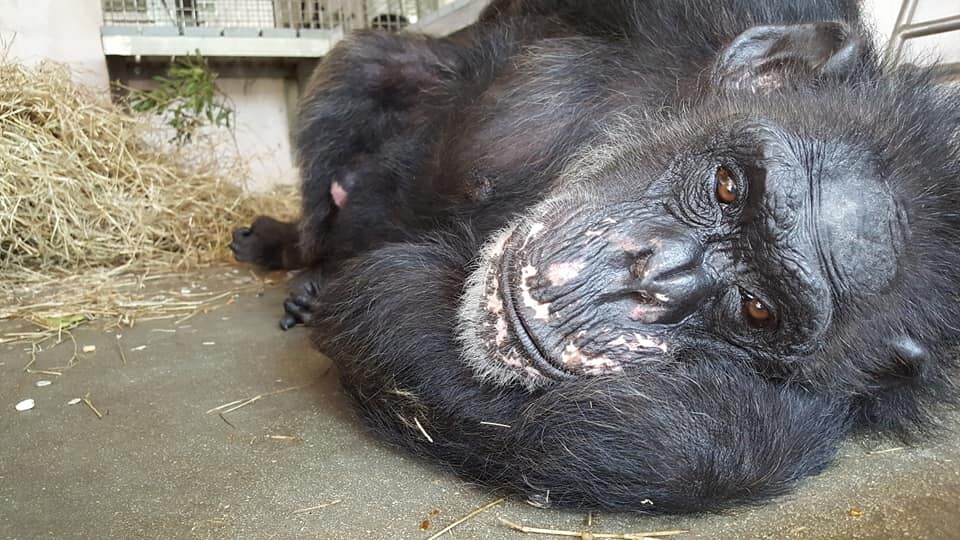 Hello, my name is
Tina the 1st

I was born at the Southwest Foundation for Biomedical Research in Texas on September 7, 1971 to parents Betty and Kirby. The next day I was removed from my mother and sent to the nursery to be raised by human caregivers. I was placed in multiple studies while at the Southwest Foundation, but not a lot of details are recorded in my file. I gave birth twice while there. My first baby was a daughter, Angel. Sadly, I was unsure how to care for her. The staff found bite marks on Angel and weren’t sure if the wounds were given to her by me or another member of the group. This led the staff to make the decision to remove the baby and send her to the nursery. Almost eight years later I gave birth to a second daughter via emergency C-section after staff found me collapsed in my cage, pale and breathing rapidly. Baby Terri was born with the umbilical cord wrapped around her neck and arm. The baby was stabilized and sent to the nursery so I could recover from surgery.

I arrived at the Coulston Foundation at the age of twenty- seven. My life appears uneventful for the next four and a half years until Save the Chimps took over the nearly bankrupt laboratory in September 2002. Things definitely perked up, as chimpanzee introductions began, and family groups were formed. I became a part of Bobby’s family and migrated to Florida in January 2010.

A behavior profile done on me in the lab described me as confident and as someone who does well in a group. This is still true today. A strong female, I became a high-ranking member of my family until my status waivered somewhat when my diabetes started to leave me tired and less able to participate in group politics. Fortunately, the medical issue was diagnosed quickly and STC staff put together a plan to train me to voluntarily present my arm for insulin injections. I am kind towards my caregivers but being so strong-willed there was concern about how I would react to being poked with a needle. As it turns out, there was nothing to worry about. I quickly realized what was being asked and offered my arm for insulin injections when I needed them, with little fuss. Once my health was on the mend I resumed my leadership role in the group.

A big part of sanctuary life is being comfortable and happy. For me, this means making sure I always have a nylon jacket and plenty of soft blankets to take with me to the island and back into the building to sleep at night. At one point I became so attached to a particular jacket, I carried it around until it was the size of a handkerchief! Along with all the laundry, my jackets are washed on a regular basis and hung up to dry. If I spot one on the clothesline I will ask for it, which of course my caregivers willingly oblige.

I enjoy the company of my human friends. I start each morning at the front of the island waiting to greet my caregivers with a welcoming smile. As everyone goes about the day, I’ll invite people to sit down by wiggling my fingers through the mesh in a friendly gesture. If that doesn’t catch anyone’s eye I’ll grab someone’s attention with a few quick raspberry sounds. Once my invitation has been accepted, I enjoy the peacefulness of gazing into my caregiver’s eyes and sharing a special moment. This kindness extends to everyone who visits my building and I’m usually the first female to open up to new caregivers.

My best friend is Polly and I will even occasionally share one of my jackets with her. During meal times we choose which room and which companions we would like to eat with. I prefer a quiet room away from the rambunctious boys. I love food but if the care staff hands me something I don’t want (like tomatillo), I will throw it across the room. I love the fresh air so much I like to spend as much time possible soaking it all in. After the meal is over I take my jacket and blankets out to my island home and spend my days enjoying retirement with friends and family. And that’s what sanctuary life is all about.

Tina Foraging for Enrichment on Patio