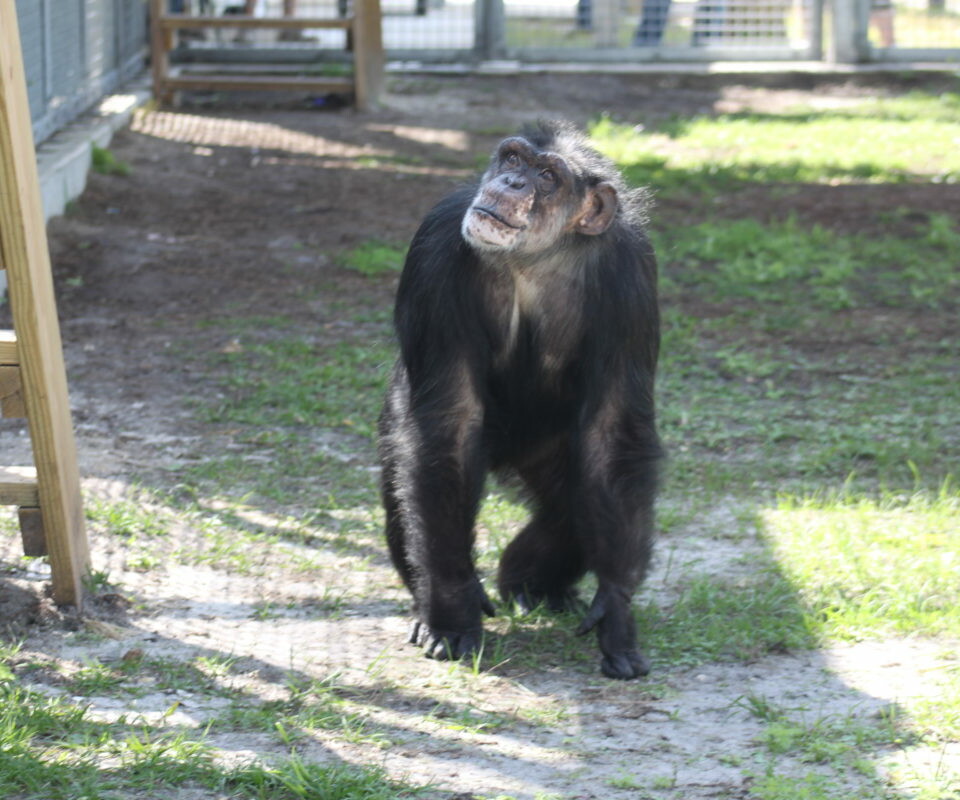 In loving memory of
Tarzan

We announce with heavy hearts the passing of our beloved resident and friend, Tarzan. Tarzan was a sweet and playful chimpanzee who proved to be an expert at making friends during his introductions into Bobby’s family.

“We are deeply sad to lose such an important part of our family here at Save the Chimps. Tarzan made friends wherever he went with his natural playful personality, it’s easy to see why he was so popular and so loved by humans and chimpanzee alike,” stated Save the Chimps Executive Director Dr. Shelly Lakly.

A former entertainer whose teeth were removed by a fearful trainer, Tarzan spent his last years surrounded by a new group of friends on a three-acre island home at Save the Chimps. Since its founding in 1997 by primatologist and captive chimpanzee pioneer, Dr. Carole Noon, the sanctuary has successfully retired 334 chimpanzees from unsuitable living conditions, allowing them to live out their days in a safe, secure, and vibrantly social community alongside their fellow chimpanzees. The retired chimps live in large family groups on 12 separate three-acre islands, where they receive three fresh meals daily, first rate medical care, and a variety of activities in an enriched environment.

There are no records of Tarzan’s birth, however all indications point to him being of advanced age. Chimpanzees in captivity can live upwards of 50 years. As a young chimp, Tarzan was sold to a private trainer in New Jersey where Tarzan met his best friend Coby, a former pet. Eventually, Tarzan and Coby were retired to Black Pine Animal Sanctuary, where they lived happily together. But sadly, after 22 years of being by Tarzan’s side, Coby died, leaving Tarzan alone. Black Pine Animal Sanctuary reached out to Dr. Jane Goodall and other experts in the field to find companionship for Tarzan. After a thoughtful search, Black Pine made the decision to move Tarzan to Save the Chimps in 2016 to give him more opportunity for companionship.

Upon entering his first home at Save the Chimps, Tarzan immediately explored his expansive play yard and the outdoors – choosing to sleep outside every chance he could. And as soon as his initial quarantine was completed, Tarzan slept side by side with his first sanctuary friend Geraldine. Multiple friendships blossomed as he was introduced to more and more chimpanzees with whom he would explore, groom and play. After careful evaluation Tarzan was introduced to each member of Bobby’s family and soon he was part of a large family he could call his own. “It was the happiest we have ever seen him. The hours prior to his death, he spent on the island enjoying time with his new friends,” added Save the Chimps Caregiver Skye Conners. In fact, in the last available video footage of Tarzan he can be seen enjoying a coconut, peacefully looking at the sunset on his island home. Tarzan was regularly spotted sleeping outside when he could, in a nest he made, often close to the water’s edge.

Tarzan was found early Sunday, in the water adjacent to his island home. Official pathology results are pending, but it is likely he suffered from cardiac arrest and subsequently rolled into the water as no evidence of drowning was found during the initial post-mortem examination, reported Director of Veterinary Services at Save the Chimps, Dr. Valerie Kirk.

“While we are grieving the loss of this playful chimpanzee, we are comforted by the notion that Tarzan died outside on his island home that he loved, surrounded by his friends,” added Lakly.

Email us your thoughts and memories of Tarzan and we will gather them for an online memorial.

Tarzan released onto his island home