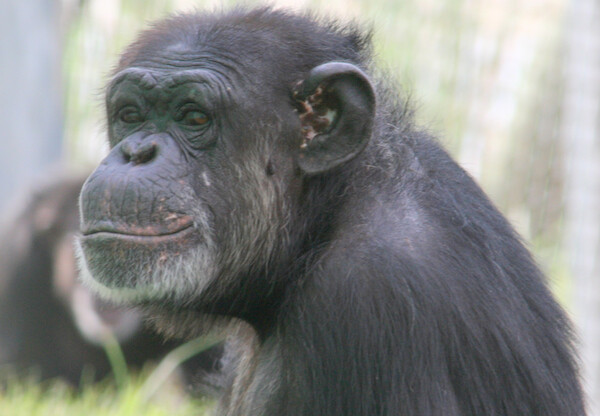 In loving memory of
Stella

The first few years of Stella’s life are undocumented, but we do know that she was born in Africa in the late 1960s or early 1970s, captured, and brought to the United States in 1974, where she ended up at the Holloman Air Force Base in New Mexico.

While she was young, she was used as a biomedical research subject. When she matured, she was used in the breeding program. Stella had thirteen children between 1980 and 1997, all of whom were taken from her shortly after birth. Three of her children, Lee, Tara, and Bradley, preceded Stella in death. Four of her children are residents of Save the Chimps: Connor the First (aka Sir Connor), Logan, Moesha, and Whoopi. Two of Stella’s children, Julie and Theo, are believed to reside at Texas Biomedical Research Insitute. A son, Ziggy, is believed to be at the Alamogordo Primate Facility, and another son, Barry, may reside at New Iberia Primate Research Center.

Throughout the long years that Stella was used as a breeder, she was denied the opportunity to form lasting friendships. She would often be paired with a male or a female—but then weeks later separated from them. Finally, at some point in the late 1990s or early 2000s, Stella met Geraldine—and they remained together until Stella’s last breaths.

Stella was quiet and peaceful—almost Zen—the polar opposite of her best friend Geraldine. Their friendship was deep and abiding, and Stella was Geraldine’s champion and protector. The two would often venture out into the Florida sunshine together.

Stella was found deceased inside of her family’s building early in the morning. So powerful was her and Geraldine’s friendship, that upon learning of Stella’s passing, the caregivers did not dwell on their own sorrow, but immediately turned their thoughts and concern to Geraldine. Although the other members of Stella’s family eventually left the room where she lay, Geraldine did not.  Instead, she remained next to Stella, quietly and gently inspecting her body. At one point Geraldine brought a blanket over to Stella as if to cover her with it. We allowed Geraldine to remain with Stella for several hours. She finally moved away from Stella when one of Geraldine’s favorite caregivers came to see her.

Stella was a friendly and gentle chimpanzee, who had quiet strength and confidence. She was a chimps’ chimp and enjoyed the company of her large family. She reveled in the spaciousness of her island home. Her final years were spent in peace and contentment. To help us provide better lives for other chimps just as we did for Stella, please consider donating in Stella’s memory.