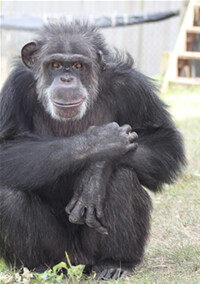 In loving memory of
Sinbad the 1st

Although we do not know exactly when or where Sinbad was born, we believe that he was most likely born sometime between 1964-1971, possibly in Africa or to a private breeder. The first record of his existence is a sheet of paper from a lab known as the Buckshire Corporation dated October 16, 1984. Sinbad was described as an adult male who came to Buckshire from a private zoo, and before that was in a private home. It is reasonable to guess that Sinbad was a pet who was sent to a roadside zoo when he became too strong to manage. Perhaps the zoo later closed, or perhaps the zoo sold Sinbad. Either way, Sinbad ended up in a research lab.

On December 28, 1984, Sinbad was sent to The Coulston Foundation, a now-closed research lab in New Mexico. Three days later, he was assigned to his first biomedical research study. For the next 8 months, Sinbad was darted once a week with ketamine to immobilize him for blood draws and liver biopsies. After 8 months passed, his sessions were limited down to once per month, until the study finally ended in February 1986.

In 1988, Sinbad was assigned to another study in which he was administered an experimental monoclonal antibody that was supposed to target cancer cells, most likely to test for toxic effects since Sinbad did not have cancer. For the next two weeks, Sinbad was anesthetized every three days and administered the experimental drug. He became ill right away and was thus removed from the study.

In 1992, Sinbad was assigned to yet another study, in which he was anesthetized for five days in a row and administered a “test material” via a stomach tube. When chimps are anesthetized, food must be withheld from them, meaning Sinbad would have been starved for five days. In the middle of the study, the protocol was changed, and Sinbad had to start over.

Sinbad was a candidate for yet another study in 1995, but it was discovered that he had a heart arrhythmia, so he was removed from the protocol. He was never used in research experiments again.  As far as we can tell, this meant he ended up languished alone in “The Dungeon”, a dark and depressing part of the lab facility that “housed” hundreds of isolated chimpanzees in cement cells, for the next seven years.

Everything changed in 2002 when Save the Chimps took over The Coulston Foundation and rescued Sinbad. Incredibly friendly and outgoing despite his years of solitude and boredom, Sinbad quickly charmed his new caregivers. However, we were sad to see that he had been taught to demean himself for food or attention when he lived in a human household, flipping his lower lip down and making a face to receive treats or attention. Sinbad soon learned that he would never have to do this for basic necessities again.

Save the Chimps veterinarian, Dr. Jocelyn Bezner, worked with specialists to diagnose Sinbad with cardiomyopathy and administer the proper medications for treatment so that he could be introduced to a chimpanzee family.

Once Sinbad’s treatment began to take effect and “The Dungeon” was renovated to allow introductions, Sinbad met Whoopi, a sweet but anxious female chimp who was psychologically damaged from her years of isolation. Sinbad fell in love with Whoopi, and the two of them became fast friends, Sinbad always standing up to anyone who dared bother her. With Sinbad by her side, Whoopi’s confidence grew.

Sinbad, Whoopi, and his other friends arrived in Florida on December 16, 2009, where a beautiful island tucked away in the most peaceful corner of the sanctuary awaited them, alongside Bobby’s family. Sinbad embraced his newfound freedom right away, exploring every inch of the island. He loved climbing the hills and basking in the sunshine. He could almost always be found outside, rain or shine.

On May 18, 2012. Sinbad spent the morning enjoying the beautiful weather on the island with his family. Just before lunch, Sinbad collapsed from heart failure. CPR was performed but was only temporarily successful. The veterinary staff and caregivers maintained a vigil around Sinbad, providing constant monitoring and treatment. Unfortunately, despite our efforts, Sinbad’s heart rhythm never returned to normal, and he passed away later that day.

Today, Sinbad is remembered for his ever-present smile and the light in his eyes. He was always full of happiness and charm. When asked to describe Sinbad, another of his beloved caregivers, Amy, had this to say: “He was perfect.” He is deeply missed, but the thought of his sweet smile never fails to bring a smile to our faces. To help us give other chimps better lives and to spread Sinbad’s bright smile among them, please consider donating in Sinbad the 1st’s memory.