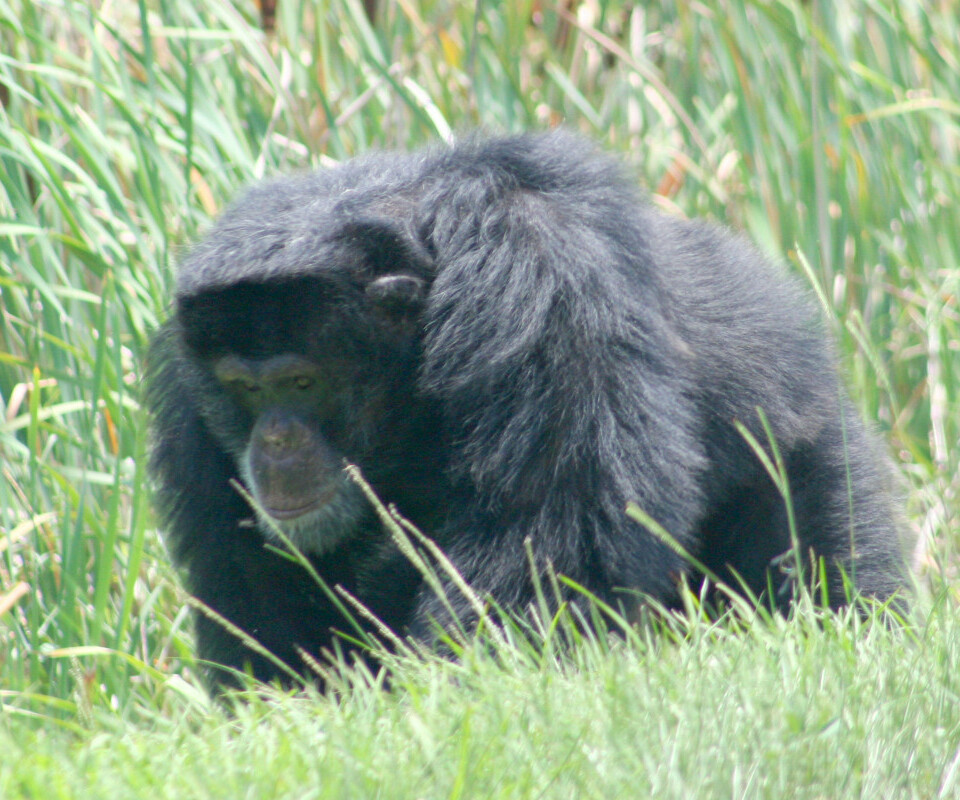 In loving memory of
Shane

Shane was charming, playful, and had a love for life despite the years of suffering that he endured. He filled our hearts—and his departure due to kidney failure has left a painful void in our lives.
Shane was born November 14, 1985 to his mother Kelly and father Conrad at the Laboratory for Experimental Medicine and Surgery in Primates (LEMSIP) in New York State. His records show that he remained with his mother for at least a week, but we do not know exactly when he was taken from her. During Shane’s 11 years at LEMSIP, he was anesthetized 156 times and his liver was biopsied at least 14 times. He lived in a small isolation cage and never saw the outdoors.

In 1996, LEMSIP closed its doors, and Shane was shipped to The Coulston Foundation, a laboratory in Alamogordo, NM. Coulston was in some ways an improvement for Shane: he met other chimps, and had access to an outside cage. But sadly, Shane was a subject in a controversial experiment known as “Spinal Dynamics” in which a healthy disc was removed from Shane’s cervical spine, and replaced with a prosthetic disc. Some time later, the prosthesis was removed, leaving Shane without a disc in his neck. No pain medication was given to Shane following both surgeries. We can only imagine the pain and discomfort he must have suffered. Shane would ultimately be plagued with neck stiffness for the rest of his life.

In 2002, Shane’s life took a turn for the better when Save the Chimps took over The Coulston Foundation, rescuing and retiring Shane and more than 250 other chimpanzees. Shane became a member of Rufus’s Family, the largest known social group of chimpanzees in the Americas. Shane left laboratory life behind forever when he and his chimpanzee friends made the journey to a spacious island home built just for them in sunny Florida.

Shane relished island life. Despite never having set foot on grass or lived outside of a cage his entire life, Shane bravely ventured forth onto the hills of his three-acre island home. He loved browsing for goodies, grooming with friends, and sunbathing on the patio. For a time he was the alpha male of the group, a kind and gentle leader who could always be counted on to mediate disputes. (A young male named Gerro eventually took over, and Shane retired from his duties.) In 2008, Shane became an “uncle” of sorts when babies were born into the family due to unexpected regrowth of vasectomies. Little Leo in particular revered Shane, and Shane delighted in playing with this rambunctious little youngster. Leo even began to copy Shane’s unique style of chimpanzee display, in which Shane would shake his head rapidly back and forth while clapping—even though this often resulted in neck pain due to his spinal surgery.

Shane’s warm personality endeared him to all who knew him. He was strikingly handsome with a unique forward-sweeping hairdo. He liked to wiggle his toes at his caregivers, earning him the nickname “Shaner-toes,” or just plain “Toes.” He had an unusual obsession with new rubber boots, and would keep an eye out for any humans sporting a fresh pair. He was usually upbeat and playful, but like anyone, had his moody days. If Shane was grumpy, his caregivers knew to give him his space—but also strove to bring a smile to his face. Due to his declining kidneys, as well as neck pain, Shane received regular medications, which he didn’t particularly like. His caregivers prepared oatmeal or other concoctions to hide the taste of his medicines, and Shane enjoyed the special attention as he was encouraged to take his daily meds.

On the day Shane passed away, our veterinarian Dr. Bezner read these words, prepared by our vet tech, Kristen, which described Shane perfectly:
“Shane: Those given this name have a deep inner desire for a loving family, work well with others, and very much want to be appreciated. They tend to be quiet, considerate, sympathetic, adaptable, and sometimes shy. Those named Shane are trustworthy, respect others, and make excellent diplomats, mediators, and friends. They are often very intuitive, enjoying detail and order, finding change worrisome at times. Most importantly, the meaning of the name Shane is generally understood to symbolize a gracious gift from the Universe.”

Shane is survived by his half-sister Katina of Tapioca’s Group at Save the Chimps, and the 25 wonderful chimpanzees with whom he shared his final years.

Shane, we miss you so much. Thank you for the gift of your forgiveness, your smile, your friendship, and your cute little toes. We will always love and remember you.