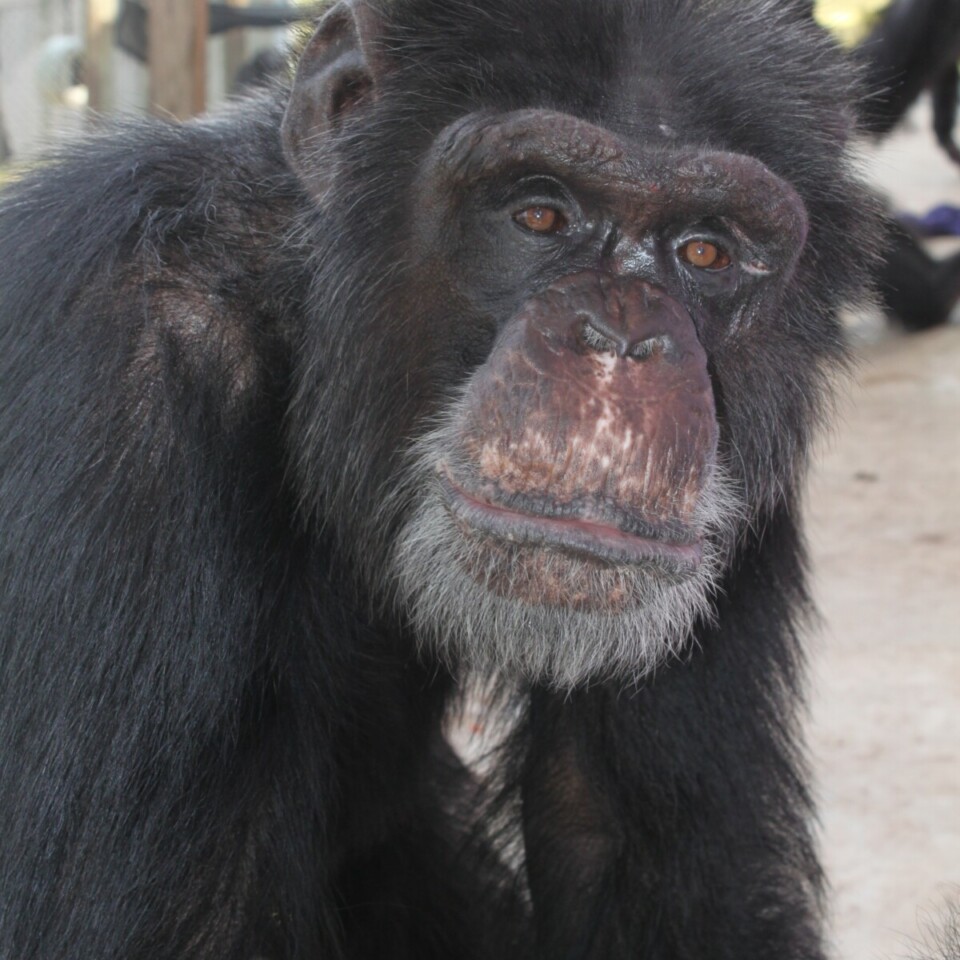 Hello, my name is
Scotty

“Carve your name on hearts, not tombstones. A legacy is etched into the minds of others and the stories they share about you.”
– Shannon Alder

In May 2014, the Save the Chimps family suffered the loss of our dear, sweet Scotty due to kidney failure. Scotty was a sweet, sensitive soul who was beloved by chimpanzees and humans alike. His absence is felt deeply by all who knew him.

Scotty’s given name was Scott, but he has always been Scotty, or “Scotty-Bear” to us. Scotty was born October 21, 1982 at the Laboratory for Experimental Medicine and Surgery in Primates (LEMSIP) in New York State. His mother is listed as “CH-490” but her name is not known; his father’s identity is a mystery.

Scotty’s research records do not start until 1984, when he was two years old; it is possible that he was with his mother for that time period, or he may have been living in the laboratory nursery. At some point, Scotty was moved into a small cage—no larger than 5’ x 5’ x7’—suspended off the ground, where he lived alone with no physical contact with other chimpanzees. Scotty was anesthetized with ketamine and had his blood drawn no less than 349 times between 1984-1996. His liver was biopsied—meaning a needle was inserted into his liver and tissue drawn out—91 times.

In the late 1990s, LEMSIP closed, and Scotty was moved to The Coulston Foundation, a biomedical research laboratory in Alamogordo, NM. Even though Coulston had a history of repeated violations of the Animal Welfare Act, the move was in truth a step up for Scotty. At Coulston, he set foot on solid ground (albeit concrete) for the first time in years. He also got to live with other chimps, joining a group of males his age, some of whom also came from LEMSIP. Based on Scotty’s records, it does not appear that he was used in any research protocols at Coulston.

Scotty, like many of the LEMSIP chimps, was also reluctant to go outdoors. His years trapped indoors in a tiny cage made him wary of the blue sky and sun overhead. But over time he began going outdoors more and more often, especially during holiday parties! Eventually Scotty joined Bobby’s Family, making friends with Bobby, Walden, Fergus, Jeannie, and the other wonderful members of Bobby’s Group.

Scotty’s life changed again in 2002 when Save the Chimps took over Coulston and ensured that Scotty would never again be used in a research protocol. Scotty’s quirky and charming personality soon endeared him to his new caregivers. His new diet of fresh fruits and vegetables mystified him, and although he enjoyed the fresh fruit offered to him, for a long time he would not even look at a vegetable. When he first gave carrots a try, everyone heard about it!

In 2010, Scotty moved across the country one last time, this time to a beautiful island at Save the Chimps in Fort Pierce, FL. Just as he had in New Mexico, Scotty quickly won the hearts of his caregivers in Florida. He had a unique mannerism of greeting his caregivers by shaking his head and puckering his lips or sticking out his tongue. It was his way of saying hello. One of his caregivers, Brittany, found comfort and happiness in Scotty’s presence when she was going through a difficult time: “Being around Scotty really helped me when my son was in the hospital. He was just so sweet and friendly,” she said fondly.

Scotty was a gentle soul, and did not like conflict within his family. If other chimps squabbled amongst each other, or if another chimp was unpleasant to him, he communicated his frustration and dismay quite loudly. (He kind of found it hard to “let it go.”) He appreciated kindness, and showed kindness to others. His caregiver Kyle shared an amusing incident that he observed one day:

“Scotty loved monkey chow, and he liked it served to him in a feeder box. He would sit down and savor his chow, and defended his chow against any would-be thieves. The other chimps generally respected Scotty’s domain. But one day, Jeannie walked up and started taking some of his chow out of the feeder box. Ordinarily that would upset Scotty, but he didn’t want to be hostile to Jeannie, who is just as sweet as Scotty is. So instead, he walked over to the lixit [an automatic water spout] and pressed it, using his fingers to direct a small spray of water in Jeannie’s direction so that she would move away from the feeder box. He came up with a clever solution that didn’t involve any raised voices—to me it really showed what kind of a guy Scotty is.”

Scotty was, in a word, a gentleman. (A gentleman who loved his chow.)

Scotty grew to love the outdoors, even refusing to come indoors at times, which made us all quite proud of him! He liked to hang out on a wooden platform near his building, soaking up the sun. In his final years, at least, he got to enjoy a world without bars.

In 2012, Scotty’s kidney’s started to fail. Unfortunately, treatments such as dialysis or a kidney transplant are not possible to do in chimps. But under the watchful eye of his veterinarians and caregivers, Scotty received extra fluids daily, and medications as needed. As a result, Scotty thrived for another year and a half before sadly succumbing to kidney disease. The afternoon of May 28, Scotty began to slip into a coma, and his best friends Walden and Fergus stayed by his side until they knew it was time to say goodbye. Scotty passed away peacefully, surrounded by the love of his human and chimpanzee family.

Scotty-Bear, your name is carved in our hearts, and stories of you will be shared for years to come. We miss your puckered lips, your games of chase, and your bright friendly eyes.

May you rest in peace.