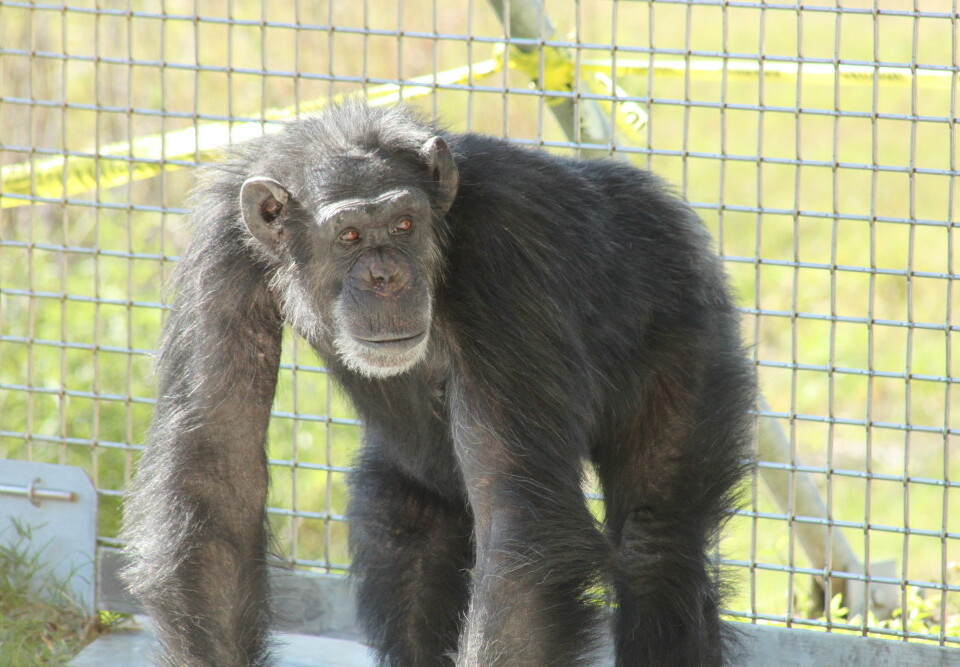 In loving memory of
Scarlett

Scarlett was born on November 11, 1979 at Holloman Air Force Base in Alamogordo, New Mexico. Within hours of her birth, Scarlett was taken from her mother and placed in the nursery. Like many nursery-reared infants, she suffered from frequent bouts of illness, including respiratory infections, diarrhea, and fevers that required isolating her from her comforting peers. When Scarlett was one year old, her ID number was tattooed onto her chest and she was sent to the National Institutes of Health to begin life as a test subject. She had six liver biopsies in preparation for her first study, then had bloodwork weekly to monthly for the next 3 years. She also had 55 intrusive punch liver biopsies with no pain relief noted in her laboratory records. Scarlett was returned to New Mexico in 1985, relocating to the Coulston Foundation, a notorious laboratory with the most Animal Welfare Act violations in history. For the next 6 years, she was used in multiple protocols that required frequent blood tests and liver biopsies. She lived alone for the most part, but was occasionally housed with a female chimp named Sierra.

In 2001, Scarlett began having seizures, but she was not treated for them until Save the Chimps rescued her and 265 other chimpanzees from the Coulston Foundation in 2002. We quickly learned that Scarlett was a very intelligent and strong-willed chimpanzee, and that her “rages” were actually caused by a lack of control over her own environment. Once we understood what Scarlett needed, her episodes of self-mutilation subsided and her true personality emerged – we discovered that Scarlett was sweet, loving, and funny. She tolerated male chimps, but absolutely adored male humans. She had all human visitors under her spell and always had a clear set of demands – sometimes wanting to sit quietly, other times wanted to be groomed and scratched with a tickle stick. She was quick to reprimand anyone who didn’t follow her direction!When Scarlett became old enough to breed, she was introduced to male chimps, but was very intimidated by them. A note in her laboratory record during this time reads, “She presses her brow in the cage bars and cries like she is depressed.” After conceiving, Scarlett was socialized with other females who were about to give birth in hopes that she would learn how to care for offspring. She gave birth to a healthy boy named Joey on August 24, 1997, but sadly Scarlett never picked up any mothering skills from the other females. Joey was taken away from her to be raised in the laboratory nursery. Meanwhile, Scarlett had post-partum complications that required surgical attention. A month after her surgery, she was reported to have emotional distress exhibited by self-mutilation and “fits of rage.” Lab workers spoke out for her, concerned about her abnormal behavior, but according to her records it was not addressed. Scarlett gave birth to a second baby, Jude, on October 23, 1999. Again, her baby was removed to be nursery-reared. Scarlett had more complications following the birth of Jude, requiring three surgical interventions. This was Scarlett’s last pregnancy.
One mid-morning in 2008, we found Scarlett on the floor partially paralyzed. An MRI showed an area of bleeding in her upper spinal cord. Because we were not present at the time, we do not know for sure what happened, but she may have had a seizure or just hit her head on the back of a perch. This wonderful, beautiful lady was an excellent patient, always so tolerant of us constantly fussing over her to make sure she did not develop bedsores, infections, or other complications that come with not being able to move. Slowly, over months, she regained function of her limbs and eventually was able to knuckle walk again, but never regained all of her strength. She had been a member of Bobby’s family, but we were concerned about putting her back with her entire family because we knew how rambunctious the male chimps could be. Instead, she lived next to her family and we rotated friends in and out to visit with her. One thing we all knew she needed, and gave her, was outdoor access, as she was she was the ultimate sun worshipper! As the earth rotated on its axis, Scarlett had a look of peace and serenity on her face as she followed the warmth of the rays. Eventually, we realized she preferred only a few chimps with her, so we moved her to our Special Needs Facility with her friends Millie, Geraldine, and Abdul, all of whom had emotional or medical concerns that prevented them from living in a large group. Garrey, who suffered from herniated discs in his back, soon followed.
The last day of Scarlett’s life was an ordinary day. She relaxed in the sun with her friends, ate three great meals of fresh fruits and vegetables brought to her by her favorite caregivers, and had lots of visitors. Soon after dinner, she died in her sleep. We witnessed the other chimpanzees say their goodbyes by gently holding her hands and sitting next to her, then we called the entire staff to let them know. It was an unexpected death with no obvious cause, but we hope to understand more once we receive her pathology reports. In the meantime, each time we pass by the Special Needs Facility we think of Scarlett sitting in the sun, waiting to greet us with her unique and excited call. She will always be in our hearts, and has left us her two beautiful sons, Jude and Joey, who are just as sweet and wonderful as she was.
We promise to take care of your friends who call Save the Chimps home, until it is their time to join you.
We love you.

Join us in remembering Scarlett by making a donation in her memory.