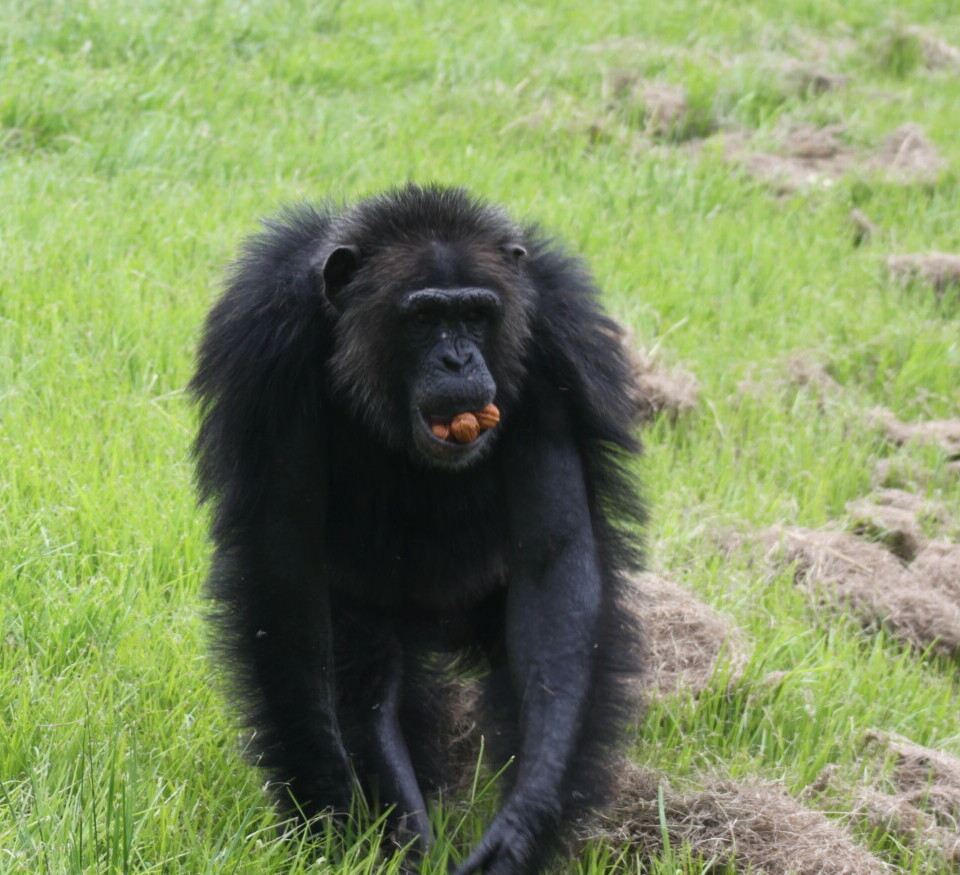 Hello, my name is
Ryan the 2nd

I was born November 17, 1987 on Holloman Air Force Base, near Alamogordo, NM, to my mother Olivia and father Doug. Olivia did not know how to properly care for me, so I was taken to be raised by humans in the nursery. When I was just three months shy of my second birthday, I was shipped off to the Centers for Disease Control and Prevention (CDC) in Atlanta, GA, where I would reside indoors, never seeing the sun or sky for the next fourteen years.

I was used by the CDC’s Hepatitis Division, receiving my first liver biopsy before I was two years old. When I was just 2 ½ years old I was injected with hepatitis A virus, derived from monkey feces. During this study, part of my liver was removed, and it was noticed during the surgery that I had “unusually strong and numerous adhesions”—scar tissue that connects internal organs that aren’t normally connected—that were the result of previous biopsies.

Between 1989 and 1993, I was used in four different hepatitis-related studies. In 1994, I began self-mutilating, wounding myself on my hands, arms, and feet. Multiple instances of self-injury were noted over the next several years, including hair pulling, hitting my own face, biting my ankles, and rubbing my knuckles raw. My caregiver also noted that I was depressed and withdrawn. No anti-anxiety medications or antidepressants were prescribed in an effort to help me; no extra enrichment, changes in my environment, or chimpanzee companionship were ordered. There is nothing in my record to indicate that a behaviorist or veterinarian ever attempted to provide me with any relief from my internal anguish.

Despite my self-injurious behavior, I was assigned to additional research protocols. One study caused frequent vomiting and weight loss—so much that the possibility of removing me from the protocol was suggested. I was not removed, but lost approximately 20 lbs during the study, weight which I regained after the protocol ended. During another study, I began to frequently appear dehydrated, engaged in more self-mutilation, and developed an infection as the result of needle tracks in my forearm. I also received a kidney biopsy due to observations of frequent drinking and urination, as well as a dehydrated appearance.

In 2002, I had additional episodes of self-mutilation due to the presence of contractors working in my building. My caregiver, desperate to provide me with some comfort and relief, covered the window in the door to my room so that I couldn’t see the activity outside my door, and gave me newspapers to look at and a scrub shirt to curl up with, which seemed to comfort me.

In 2003, I finally met another chimpanzee, Anna, and both of our lives changed dramatically when we were retired to Save the Chimps. During my tenure at the CDC, I was “owned” by The Coulston Foundation, a research lab in Alamogordo, NM. When Save the Chimps took over TCF in 2002, my legal custody was transferred to STC but the CDC didn’t send me back right away. Anna and I moved back to New Mexico in August of 2003, to the former Coulston Foundation property and learned that it was now a sanctuary where we would meet other chimpanzees before moving to Florida. When I arrived in New Mexico, the only space available was in Building 300, aka The Dungeon. But for me, having spent my entire life indoors, The Dungeon was like nothing I had ever seen. Sadly, for me, I thought it was paradise. Never again would I be experimented on. I had toys to play with and blankets to nest with. For the first time ever, I could actually go into outdoor cages and feel the sun on my face. That measly 120 square feet of space was nearly five times the amount of space I had ever known before. For the first time, I could climb more than a few feet off the ground. It was very apparent I had never done this before when I first arrived; I climbed up ten feet into my outdoor cage, and had no idea how to get down. Sanctuary staff cringed as I simply let go and dropped to the floor below. Fortunately, I figured out how to get around quite quickly after that, and today I am as agile as any chimp.

Helping me recover from my years of isolation and trauma was a long process; my full rehabilitation took nearly five years. I met several chimps but never “clicked” with them. Staff didn’t give up on me and I didn’t give up either—I became friendlier to other chimps, learned how to communicate, groom, and show respect to more dominant chimps. Incredibly, I ended up in one of the largest groups at Save the Chimps—Freddy’s family. I even became one of the friendliest and most mellow members of the family!

When I joined Freddy’s group, I moved out of The Dungeon into another building with more space than I had probably ever dreamed of. But I hadn’t seen anything yet! Once Freddy’s family was complete, we moved to our new island home in Florida. Waiting for us was a hilly, grass-covered, three-acre island, complete with a covered bridge, trees, and climbing platforms. I had never lived anywhere but in a cage, and had never set foot on grass or sat under a tree. But would I be brave enough to walk through that door to the island?

Everyone was so proud of me, because I did! It was a beautiful, breezy November day, and I courageously went outdoors and set foot on the grass. I did stick close to the building as I looked about in amazement, but I went through that door and into a new chapter of his life.

Today, I continue to explore ever further. My social skills have also changed dramatically—I even became a mediator in my family, stepping in to stop any disputes that might arise. I spend a lot of time with Stephanie, and can also frequently be found huddled up to Freddy, grooming him intently.

It’s almost like the me of when I was first rescued—unable to climb, afraid of other chimps, and screaming desperately for food and attention, and the me of today—confident, relaxed, and friendly—are two completely different chimps. I even look different—hairier, healthier, and robust. But the chimp I am today was always there, just waiting to be freed from my desperate situation. I embody the late STC founder Dr. Carole Noon’s words: “All they need from us is a chance. If we meet them halfway, give them space and freedom, then they recover on their own.”