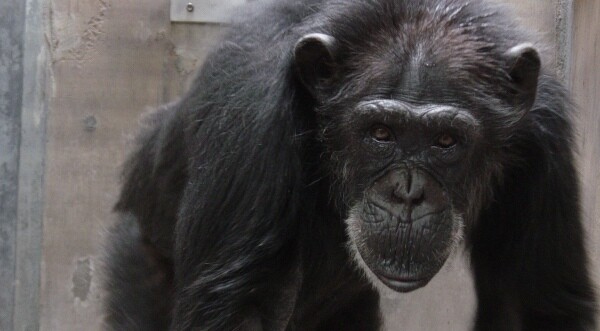 Hello, my name is
Roxy

It’s difficult to imagine the sorrow that Roxy must have felt during her many years as a “breeder” at The Coulston Foundation, the laboratory that forced her to have eight children, and then took them all from her. What kind of confusion and emptiness must she have endured after waking up to find that the infant who was in her loving arms had simply vanished? Save the Chimps first got an inkling of Roxy’s desire to be a mother when we provided stuffed toys to the chimps for the first time. Roxy mostly ignored stuffed teddy bears or other dolls, but treated toy chimps and monkeys as if they were her children. She carried them and groomed them just as she would an infant.  Although Save the Chimps does not breed, we expected that there would one day be an opportunity for Roxy to become an adoptive mother. Roxy’s dreams of motherhood came true when young Marlon and Dylan entered her life.

Marlon and Dylan had been born to two former research chimpanzees living at a facility that was experiencing financial difficulty. Marlon’s mother died, and Dylan’s mother was inexperienced and did not know how to care for a baby. STC agreed to take in the two infants, and caregiver Millie Weary loved and cared for them until they were old enough to safely be introduced to other chimpanzees. We knew exactly who would be best to be their new mother: Roxy. Roxy was thrilled, and together with the boys’ “big sister” Janice, she became Marlon and Dylan’s loving protector and guide. She comforted them during their cross-country move to Florida, and helped them to become a member of a large chimpanzee family, Ron’s Group.

Sadly, Roxy has passed away of complications related to thrombosis (the formation of a blood clot inside a blood vessel, obstructing the flow of blood through the circulatory system).  Born in Sierra Leone in the early 1960s, she was estimated to be at least 49 years old. Roxy is survived by the children she never knew: Brandon, Brandy, Eboni, Jimbo, and Spanky, all of whom are residents of Save the Chimps. She also has a son, Huby, believed to be a resident of Texas Biomedical Research Institute. Roxy lives on in the hearts and memories of her sons Marlon and Dylan, as well as her devoted caregivers.

Roxy, we hope you rest easy knowing that Janice, Tammy, and the other members of your extended family will continue to watch out for your boys and shower them with love and affection.