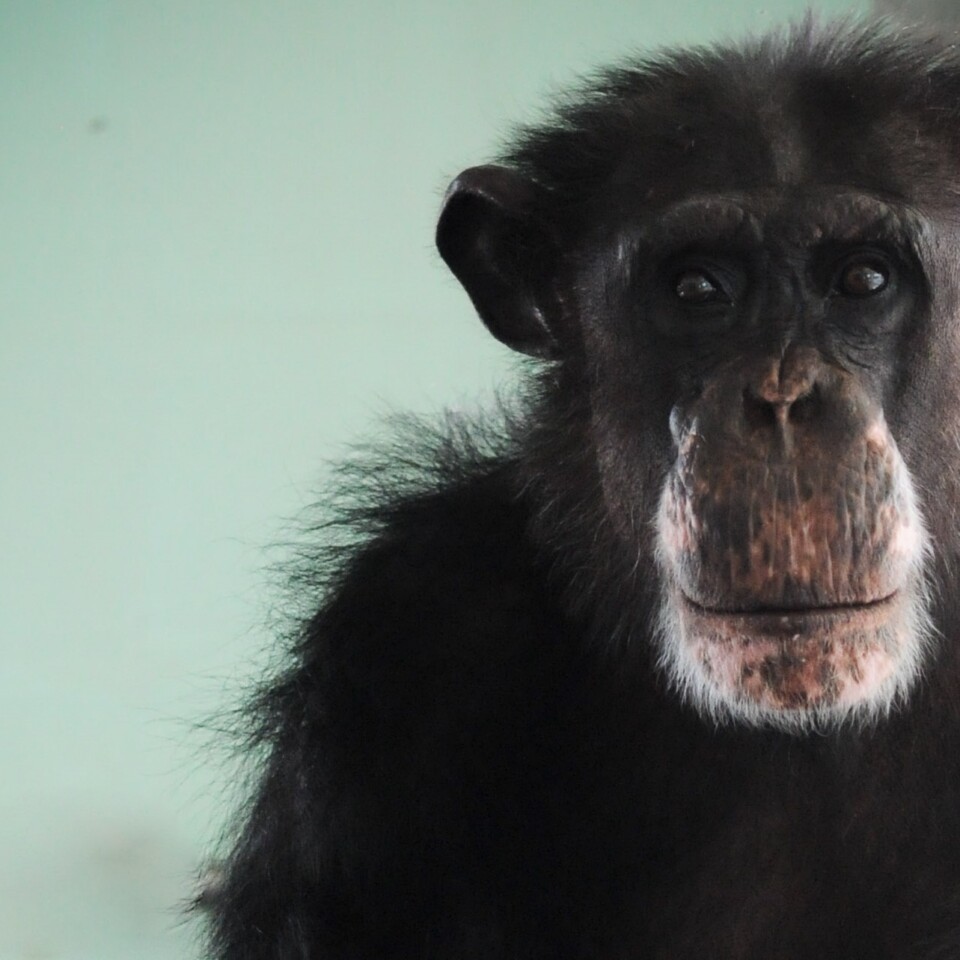 Hello, my name is
Ron

On October 10, 2011, our beloved Ron passed away peacefully on his island of heart failure. Ron was familiar to many as one of the stars of the Nature documentary “Chimpanzees: An Unnatural History,” which in part documented Ron’s journey from a former laboratory in New Mexico to a new island home in Florida. He was also the star of our hearts, a huge chimp with an even bigger smile and gentle demeanor. His charming personality and warm spirit are even more remarkable when considering the harm he suffered for so many years of his life.
Ron’s file estimates his date of birth is September 1, 1976, but since his origins are not recorded, that birth date is merely a guess. We do not know who Ron’s parents are, or where he was born. The first record of Ron’s existence is from June 24, 1987, when he received his first physical at the Laboratory for Experimental Medicine and Surgery in Primates (LEMSIP). A single notation in his file said that Ron arrived from “West Point.” Although we do not know if he was a pet, a performer, or a lab chimp prior to his arrival at LEMSIP, West Point was home to Merck, Sharp, and Dohme, which used chimps in biomedical research in the 1970s and 1980s. Ron was a full-grown chimp when he arrived at LEMSIP, weighing 143 lbs; he must have been at least 14 years old, so it is likely that Ron was actually born in 1973 or earlier.

During his 9 years at LEMSIP, Ron was anesthetized with ketamine at least 105 times. On multiple occasions, he was kept anesthetized for six hours or more, as blood was repeatedly drawn from him. He lived alone at LEMSIP, in a 5’ x 5’ x 7’ cage suspended off the ground. A veterinarian at LEMSIP noted that Ron was a very large chimp, and wrote in his file, “needs a much larger cage.” Sadly, there were no larger cages at LEMSIP. In the late 1990s, LEMSIP closed, and Ron was sent to The Coulston Foundation (TCF), a lab in Alamogordo, NM.
In 1997, Ron was observed to have an abnormal echocardiogram, but it was dismissed as being caused by the anesthetic. He was transported to the primate facility on Holloman Air Force Base (HAFB) near Alamogordo, and assigned to a biomedical research study. He was anesthetized 16 times in a 5 week period. After the study ended, he was returned to TCF’s private facility in Alamogordo.

In 1998, Ron was again transported to HAFB and assigned to Study #981109, which came to be known as the Spinal Dynamics study. In this study, Ron had a healthy cervical disc removed from his neck and replaced with a prosthetic disc. The prosthetic remained in Ron’s spine for 6 months, and was then later surgically removed.
According to Ron’s records, when the prosthesis was removed, he did not receive any pain medication until eight days after surgery. When he was finally prescribed pain medication, he was given 200 mg ibuprofen, the equivalent of one tablet, twice a day for three days. It is difficult to imagine the amount of pain he must have been in.

;In 2002, Save the Chimps (STC), under the leadership of Dr. Carole Noon, took over TCF and rescued Ron. At the time he was living alone in Building 300, which was dubbed “The Dungeon” for its dreary conditions and scores of chimps who lived in isolation. In 2003, STC’s veterinarian, Dr. Jocelyn Bezner, observed clinical signs of heart disease in Ron. His first cardiac ultrasound did not reveal serious heart disease, but in 2004 Ron showed even more symptoms of heart disease, and another ultrasound was scheduled.

During the exam, tragedy struck: Ron stopped breathing and his pulse began to fade. Dr. Bezner began CPR and resuscitated Ron, but he crashed again. Again he was revived, and again he crashed. After the fourth time that Ron stopped breathing, the decision was made to let him pass away, surrounded by his loving caregivers. Then the miracle happened: Ron started breathing again on his own. He had decided that it was not his time. The ultrasound was completed, showing extremely severe heart disease. Remarkably, he was fully recovered within hours of his ordeal. A cardiologist recommended a treatment protocol to help Ron, but cautioned that due to the severity of Ron’s condition, that his prognosis was poor. Dr. Noon began to make plans to move Ron to Florida as soon as a newly constructed building was available for him.

Ron responded well to treatment and moved to Florida in May 2005 with his buddy Thoto. He was accompanied on the journey by Dr. Bezner, and his story was documented in the Nature program “Chimpanzees: An Unnatural History.” When Ron was released, he opted not to go onto the island, sticking to the familiar concrete of the patio.

Over time, however, Ron grew to love the wide open spaces of his island. He could be seen striding magnificently over the hills, or enjoying the view from a platform. He and Thoto began to have conflict, but Ron made a new chimpanzee friend in April, a former pet who had been rescued by STC in 2003. His health was closely monitored, and his medications adjusted as needed. But there is no doubt that his caregivers were all holding their breath, waiting for the worst to happen.
Ron, however, had different plans. He defied all predictions and expectations, and lived a happy life for seven more years, enjoying the peace of his island. He became an adoptive father to young Melody, who was born at STC as a result of a failed vasectomy and whose mother lacked the skills to raise her.  Together with April, he became her protector and guiding hand. He also made new friends and saw his chimpanzee family grow to include many other chimps, such as fellow LEMSIP veteran David, former pet chimps Connor and Kramer, and lady companions Pele and Gail. Ron was a miracle and an inspiration. He endured isolation, torment, and a life-threatening illness; yet somehow Ron found the courage and determination to not only survive, but to embrace life and enjoy every moment to the fullest.

We love you and miss you, Big Papa, Mr. Do-Ron-Ron.  Rest in peace.

In Honor of Ron