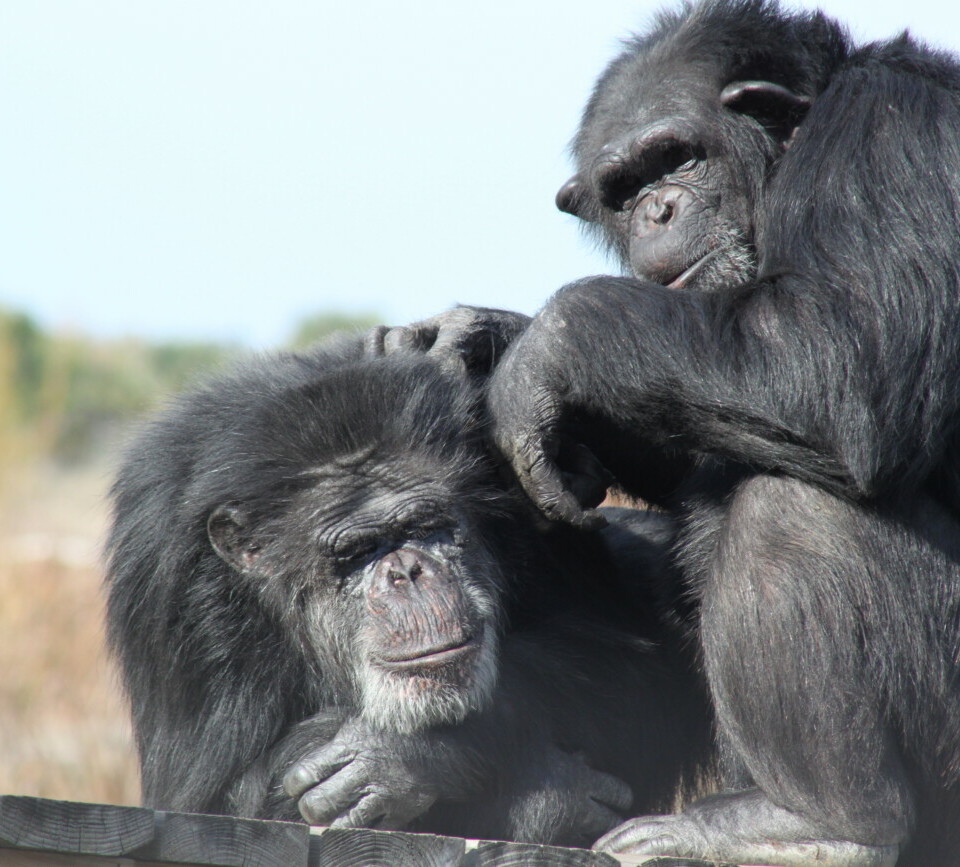 In loving memory of
Roman

“May peace be within you, may your heart be strong. May you find what you’re seeking wherever you roam.”  –Irish Blessing

Save the Chimps is saddened to share that one of our most handsome and dignified chimpanzees, Roman, has passed away at the approximate age of 48, after a struggle with heart disease. Roman’s exact date and place of birth are unknown, but it is estimated that he was born in 1966, possibly in the wild. Roman’s records start on May 6, 1975, when he was brought to Holloman Air Force Base in Alamogordo, NM. Roman was used as a research subject in seven different biomedical studies. He was anesthetized at least 225 times and had multiple liver biopsies. One of the experimental vaccines tested on Roman was for contraception; it did not work, as Roman went on to father seven children.

In 1997, Roman was transferred from the US Air Force to The Coulston Foundation, a research lab also based in Alamogordo, NM. In 2002, Coulston went bankrupt, and Save the Chimps stepped in to rescue Roman and over 250 other chimpanzees. Roman joined Kiley’s family, becoming the group’s elder statesman. Kind, charming, & mellow, Roman won the hearts of both his chimpanzee family and his loving caregivers. One of his caregivers, Torrie, remembers: “

Roman’s eyes were always full of thought and love. He was the first chimp with whom I developed a close bond. I loved Roman. We all did. Everyone who met him fell in love with him. He was just special like that. He will always have a place in my heart.”

Roman was an important part of his group, and they respected him. Roman and his family were released onto a spacious island home, which included a large Western-style platform known as “The Saloon.” He loved the island, and often slept on the Saloon under the stars.

Earlier this year, Roman began to show signs of his age, slowing down and eating less. All signs pointed to cardiac disease. A stubborn chimp, Roman refused to take most medications. Who could blame him, after years of being given substances in the research lab that only harmed his body? The veterinarians and chimpanzee care staff did whatever Roman would allow to see to his comfort and well-being, and his best chimpanzee friends Kay, Lupe, and Gertrude were never far from his side. As time passed, however, Roman became progressively worse, no longer eating or active. The veterinarians and his caregivers made the decision to humanely euthanize him. On June 17 Roman passed away peacefully on his island. His caregivers were with him during his final moments. One of his long-time human friends, Janie, remembers Roman in this tribute:

“I met Roman three years ago. He didn’t seem to care much about me in the beginning, but over the years we became very close. He was truly a wise old man with a heart of gold.

Those who didn’t know him well may have said he was not terribly fond of humans, but if you made just a little effort and showed him that you truly cared, he gave you his heart. He always gave me sweet greetings and reassurance when I said hello to him. If I caught him at the right time, he would play a “slappy feet” game of chase with me, and bounce up and down in a happy jig. He loved to have his toes played with; I would tickle his toes with the tickle stick, and he would gently wiggle them. Sometimes he would put his head up to the mesh for me to give him a good head scratch. My heart would smile, because I knew he was genuinely happy to see me.

Over time, he began slowing down. He still had spunkiness in his spirit, but his body and heart just couldn’t keep up with him. That’s when my world changed. Roman occupied my thoughts, and I wished there was something I could do to make him feel better. Once he began to lose his appetite, we all tried everything under the sun to get him to take medication or to eat. For a while he enjoyed bean burritos, and he always loved green onions, pasta, carrots, and grapes. We made sure we had a steady supply of varied snacks for him. Roman was very particular: he only ate name brand mixed nuts in a small pouch, or his yogurt-covered raisins in the individual snack size boxes. The man knew what he wanted, and we were only too happy to cater to his every whim.

Roman’s last day seemed to play out like a movie. He spent his final moments on the island he so loved. The sun warmed his face, the wind blew through his hair, he foraged some sunflower seeds, and then he peacefully went to sleep. It was an experience I will never forget. Roman was the reason I woke up every morning, and and I feel privileged to have been a part of his world.”

Roman’s death had a particularly profound affect on Kay. Most chimps seem to quickly accept the deaths of their friends and family. Typically, they show signs of concern and sadness when they view the body, and are quiet for a day or so after the death. But then life returns to normal. Kay’s reaction was different, and revealed a soft side that she doesn’t often show. Roman had been a father figure to Kay when she was young, but she grew to be fiercely independent, very tough, and a little bit greedy. To be honest, we figured her frequent hovering around Roman in his last weeks were simply to scavenge the various food items he turned down. But in the days after he was gone, Kay became withdrawn, a ghost of her usual sassy self. Like us, Kay needed time to grieve. And like us, Kay’s sorrow was gradually replaced with happiness again; she is back to her mischievous antics.

Roman is survived by his son Nigida, and daughter Patty, both of Save the Chimps. Another son, B.C., and two daughters, Lena and Toni-Renee, reside at the Alamogordo Primate Facility (APF), waiting for their chance at retirement. A large photo of Roman and Kay graces the road exiting the sanctuary, a daily reminder of the gentle, handsome chimp with the kind eyes who touched our hearts.

We love you, Roman. May you sleep under the stars wherever you roam.