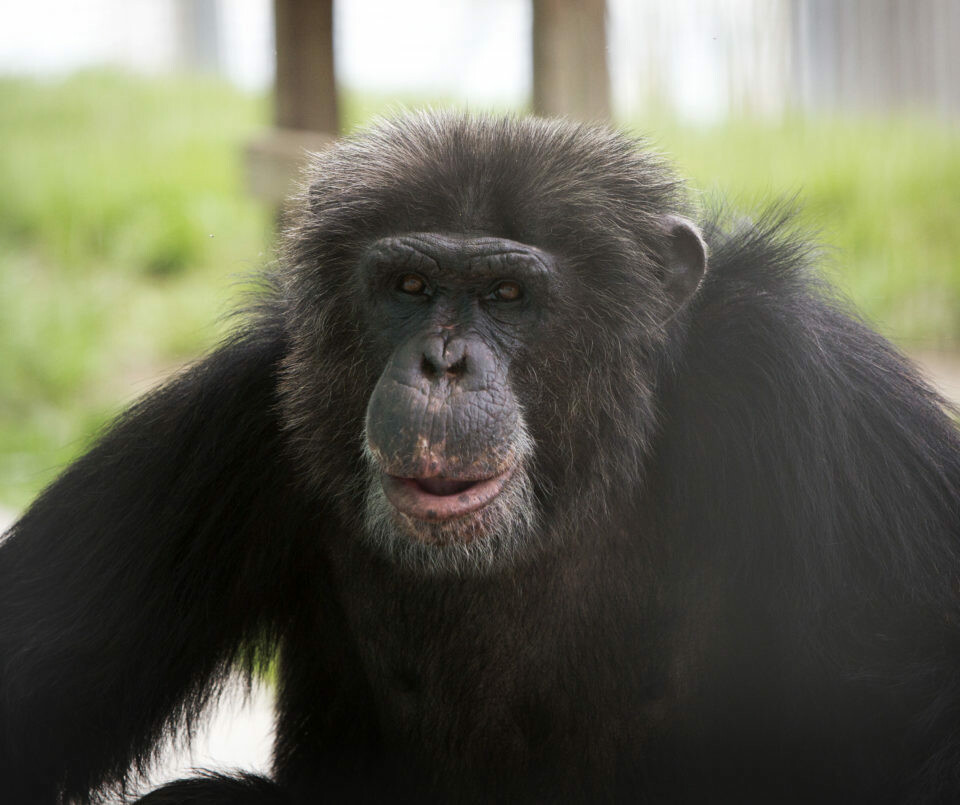 In loving memory of
Ritt

In Memory of Ritt
We announce with heavy hearts the passing of our dear friend Ritt, a sweet and playful male chimpanzee from Kiley’s family. Ritt was known for his gentle heart, his dependable friendship, and his many adorable quirks that made him so unique.

Ritt was born January 13, 1994 to his mother Frieda and his father Alvin at the Coulston Foundation, a now-defunct research lab in Alamogordo, New Mexico. He spent only one hour with his mother before being taken to the laboratory nursery to be raised by humans. When he was just 16 months old, Ritt and five other infant chimpanzees were shipped across the country to a laboratory in Maryland where he was used in hepatitis B vaccine research. The reason for this research is unknown, since the hepatitis vaccine had been approved for use in humans in 1986. He lived alone and was only able to see and hear other chimpanzees. In 2000, Ritt was sent to yet another laboratory in Texas. In 2003, Ritt was returned to Alamogordo, New Mexico – but he was now in the care of Save the Chimps, which had taken over the Coulston Foundation in 2002. It took several years to socialize Ritt into a chimpanzee family, but, in 2008, Ritt went on his final road trip. This time he was heading for paradise, a three-acre island in south Florida where he could run and socialize to his heart’s content.

Ritt loved his family and could be described as a goofy and heartfelt guy. He was lighthearted and always seemed to be enjoying life, whether he was interacting with other chimps, hanging out alone, or playing with caregivers. Though Ritt was always amiable, politics and dominance are natural in chimpanzee societies. As a young, strong male he developed a rivalry with the alpha male, Luke. They would sometimes challenge each other, with both having alliances within the group that acted in their defense. Dominance rivalries are a part of life for chimps, but the tensions surrounding them aren’t necessarily an everyday occurrence. Ritt’s days were typically spent in the company of his best friend, a sweet and playful female named Ariel. The pair were inseparable and loved to spend time together. With both of them having goofy streaks in their personalities, their play sessions and even their down time together was nothing short of adorable.

Ritt’s caregivers absolutely adored him. He had so many traits that were completely unique to his personality. For one, he loved having things on or around his neck. Whether it was a torn up piece of blanket that he wore like scarf, a basketball he balanced perfectly on his neck as he walked around the island, or empty peanut shells at the base of his neck, he just had to decorate himself! His way of greeting his caregivers and visitors was also unique. He would often be so eager to see someone, especially if he hadn’t seen them in a while, that he would react in complete excitement and work himself into a display – a common chimpanzee behavior that includes banging, stomping, and generally making a lot of noise. Then, he would only calm down if you devoted 100 percent of your attention to him and gave him an enthusiastic, proper hello. He then would wiggle with joy while sticking his lips out as if he wanted a kiss.

Ritt recently needed to undergo anesthesia for a minor procedure. Unfortunately, we did not know he had significant heart disease at the time. To our deep sadness, he did not recover from anesthesia. Asymptomatic heart disease is very common in captive male chimpanzees over the age of only 20 years old. To address this ongoing challenge, we continue to work closely with the Great Ape Heart Project, a consortium of veterinarians and other experts in the field of great ape care who are working to better understand cardiovascular-related mortalities in zoos and sanctuaries around the world and to decrease their incidence. We are hopeful that the data we provide to the Great Ape Heart Project – including ECG and physical exam results from our own residents – will help lead to increased length and quality of life for many chimpanzees who may also be vulnerable to heart disease.

The day that Ritt passed, his family was able to view his body and mourn. This is part of the passing ritual performed for each beloved chimpanzee we lose. Luke, Ritt’s long-time rival, was deeply distraught by the loss. He cried out and sought reassurance from both his caregivers and fellow chimpanzees throughout the entire time the family viewed the body. For us, this was a bittersweet reminder that there is more to chimpanzee relationships than what meets the eye during conflict. They were more than rivals – they were also family. Ritt’s entire family joined Luke in his grief. The group came one by one to see his body and many cried or simply sat by his side solemnly. We were comforted to see Kiley, a young female in the group, stay close to Ariel and groom her as she looked on. Soon, we will spread Ritt’s ashes on his island home, where he spent so many days filled with sunshine, freedom, and the companionship he needed to live a happy and full life.

Rest in peace, Ritt. We will miss you always.