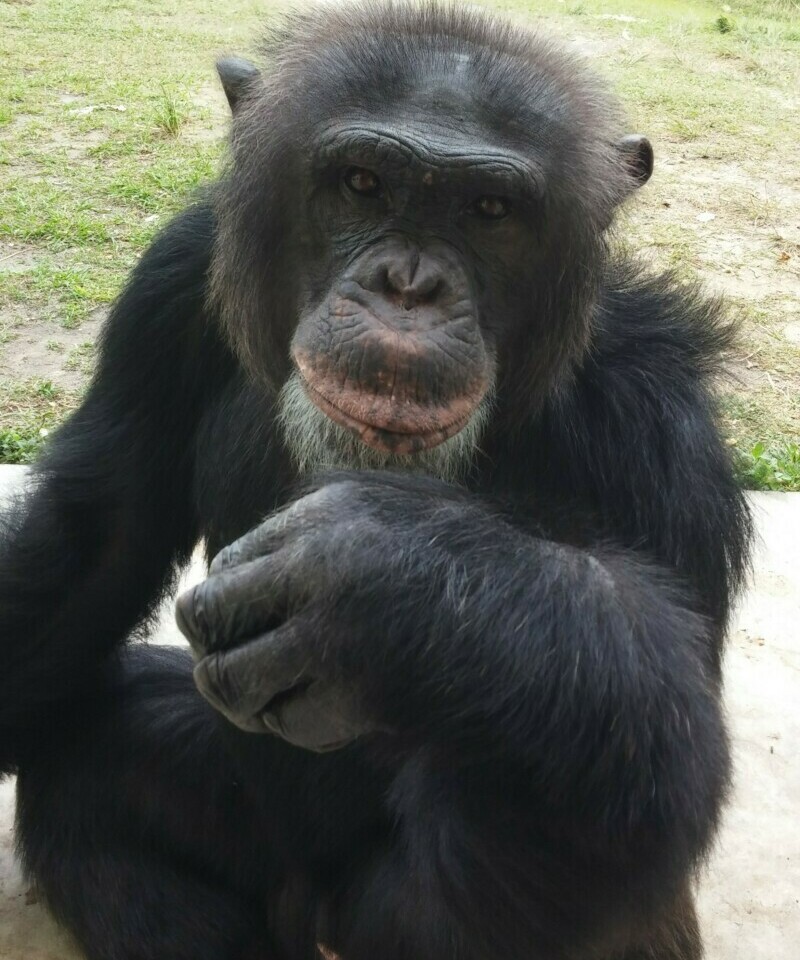 Hello, my name is
Renquist

Renquist, known affectionately as Ren, passed away unexpectedly of sudden heart failure. His death came as a great shock to his chimpanzee family and human caregivers. At just 24 years old, Renquist was a handsome, energetic chimpanzee who seemingly was the picture of health. He collapsed suddenly during breakfast; CPR was administered but sadly despite our efforts, Renquist did not recover.

Renquist was born February 13, 1991 on Holloman Air Force Base in Alamogordo, NM to his mother Kitty and father George. He was allowed to stay with his mother for a year and a half before he was taken from her, an event that must have been traumatic for both Kitty and Renquist. Wild chimps are typically dependent on their mothers for at least 5 years. Young Renquist lived in a small group of other chimpanzees his age, including Roger who was to become a lifelong friend.

Renquist’s laboratory life was relatively uneventful. He was anesthetized two to four times per year for physicals, but was never assigned to a biomedical research project. He was eventually transferred to The Coulston Foundation, a primate research lab also located in Alamogordo.

In September 2002, Renquist’s life changed dramatically when Save the Chimps took over The Coulston Foundation. Initially Ren was selected for Bobby’s Group, along with his friend Scotty. (Roger was too rowdy for Bobby’s Group.) Renquist moved to Florida, where he set foot on grass for the first time in his life and enjoyed the wide open spaces of a lush three-acre island. Unfortunately, following the move, Ren started having frequent disputes with other members of Bobby’s Group. We made the decision to transfer Renquist to Freddy’s Group, where he was reunited with his buddy Roger.

Freddy’s Group did not welcome Renquist with open arms at first, but over time they gained respect for him and he became a beloved member of the family. Roger stuck by him and the two were clearly best friends. Renquist was a ladies’ man, often following and wooing the females. He was also a part of the “Boys’ Club,” which was made up of Ren, Roger, Mika, Andres, and Jude. These boys often ate, socialized, and roamed the island together.

Renquist is remembered as a laid back but serious chimp who couldn’t be bothered to pay much attention to humans, unless they were there to serve him meals. He loved the outdoors and loved his lady friends Samantha, Cori Lyn, and CJ. Following his death, it became very apparent how much his family loved him. They gazed quietly upon his body, which we laid out for them to view, for a long time. Roger appeared especially somber and stayed by his side. Never have we witnessed such a lengthy vigil. Perhaps they were just as shocked as we were at his unexpected passing.

We greatly miss this striking chimpanzee, but we are comforted that Renquist spent most of his life in sanctuary, was loved so deeply, and enjoyed his final years to the fullest. We are also comforted by a Lakota proverb that Dr. Jane Goodall shared with our veterinarian Dr. Jocelyn Bezner upon learning of Renquist’s death:

“Without tears in the eyes, there can be no rainbow in the heart.”

Rest in peace, dear Renquist. We love you.