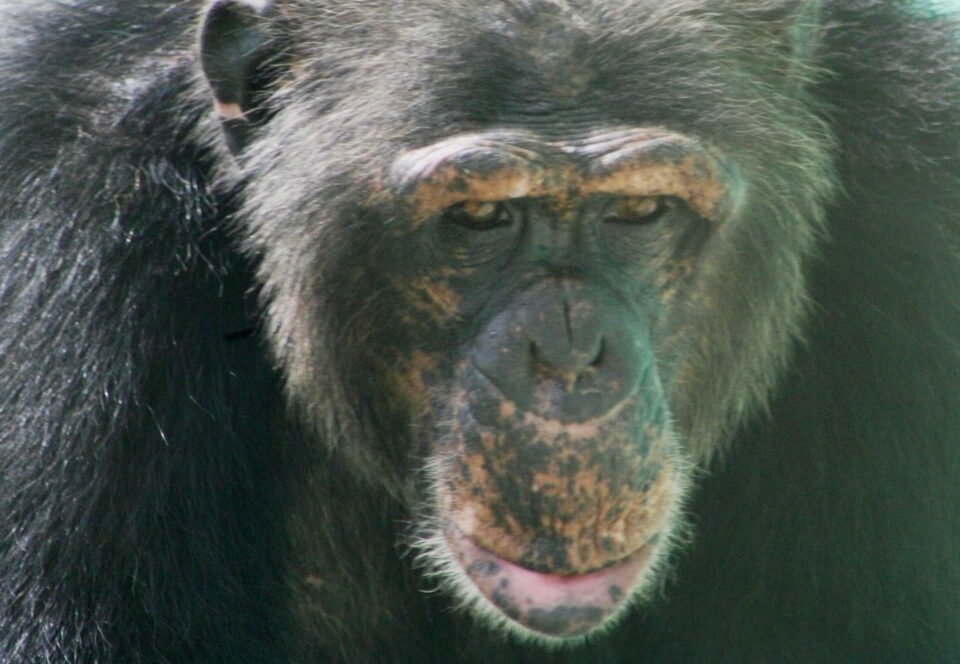 Hello, my name is
Rebel

My name is Rebel and I live on an island in Florida. Let me tell you about my family and how I got here…

After you read my story – every word of it true – I hope you’ll help my family and me. I never knew my mother. She was born in the forests of Cameroon fifty years ago. My grandmother was killed as my infant mother clung to her. Human hands pulled my mother from my grandmother’s body and put her in a cage. In 1958, she arrived at Holloman Air Force Base in Alamogordo, New Mexico. The humans called her Minnie. My mother was trained along with two other young chimps to go up in a rocket ship. They were chosen because of their fitness, intelligence, and valor. But my mother was never sent into space…

Like most of the other chimps captured in Africa for the Air Force and NASA, she ended up being used in medical experiments and as a breeder to produce more baby chimps. That’s how I got here.

I was born on January 4, 1990, by C-Section. My mother Minnie never held me – never even saw me. The humans just cut me out of her and took me away. My father, Sampson, never knew I existed. I was raised in a nursery.

When I was just two months old, I was used in my first medical study. I had needles stuck into me and something injected into my bloodstream for several hours. I struggled to get away but it did no good. I couldn’t understand why the people who had taken care of me were now hurting me.

When I was eleven months old, the humans put me in a cage and sent me off to a lab in Maryland. I lived there for five years, alone. Once a week, for all those years, I had blood taken and a needle stuck in my liver. If you can imagine how much that would hurt and how scared you would be, that’s pretty much how I felt. I tried to be brave.

When I was six, I was put on a truck and sent back to New Mexico. Since I had only briefly lived with another chimp when I was little, I was confused and afraid when the humans put me in a cage with other chimps. I tried to be tough. The humans just called me aggressive. I didn’t live with anyone for very long. Life was lonely and boring.

Then, one day, when I was twelve years old, new people suddenly showed up and everything changed. The food got better. My cage smelled better. I had soft blankets and toys to play with. The chimps around me weren’t being darted and taken away anymore. One of the humans, a woman in a baseball cap, noticed me. She said I didn’t need to be afraid anymore.

The woman told me about my mother Minnie, how strong and courageous she had been. This woman had wanted to give my mother a new life, but my mother had died before she could rescue her.

The woman in the baseball cap, who was called “Dr. Noon,” changed my life. She gave me a chance to live with a big group of chimps as I would have normally done if I was born in the wild. It took me time to adjust to living with them, but the humans were patient with me. Now, I’m considered one of the nicest chimps in the group!

This group of chimps has become my family. We all went through the same thing – years of medical experiments, pain, and isolation. Thankfully, that’s all over now. None of us need to be afraid anymore.

My family got on a big bus and traveled to our new permanent home in Florida. It’s a big island with grass, palm trees, hills, and lots of things to climb on. I was a little nervous when I first got here. I had never touched grass or been out in the open before. But when the doors opened onto the island for the first time, I thought of my mother, Minnie, and I tried to be strong and brave to honor her.

As it turned out there was nothing to worry about. In fact, I love it! There’s plenty of room to run around, to dig, to climb, and just to relax. There’s even a strong safe shelter for us to go inside if we want.

I’m very happy now – After knowing only fear and pain for so many years, I never knew how wonderful life could be. I know it takes a lot of work for all of these humans to take care of me, my family, and all the other rescued chimps. There are 11 other islands here just like mine and altogether there are almost 300 of us who live in family groups of twenty or more.

We get fresh food three times every day, and medicine if we are sick. Lots of people work hard to keep up our island homes. We always get clean blankets and toys. We also get treats and enrichment to keep us busy. Our homes are warm in the winter and cool in the summer. We always have fresh water. If something breaks, someone comes to fix it right away. And every day, I hear someone say, “I love you.”

I know the people who feed us and care for us need your support. Will you make sure we get food, toys and activities, and all the care and protection we need?

I know it might be hard to believe, but this is the true story of my life…

I hope it will get you thinking and encourage you to join my family of supporters by sending a donation to Save the Chimps, the humans and organization that care for me. We really need your support!