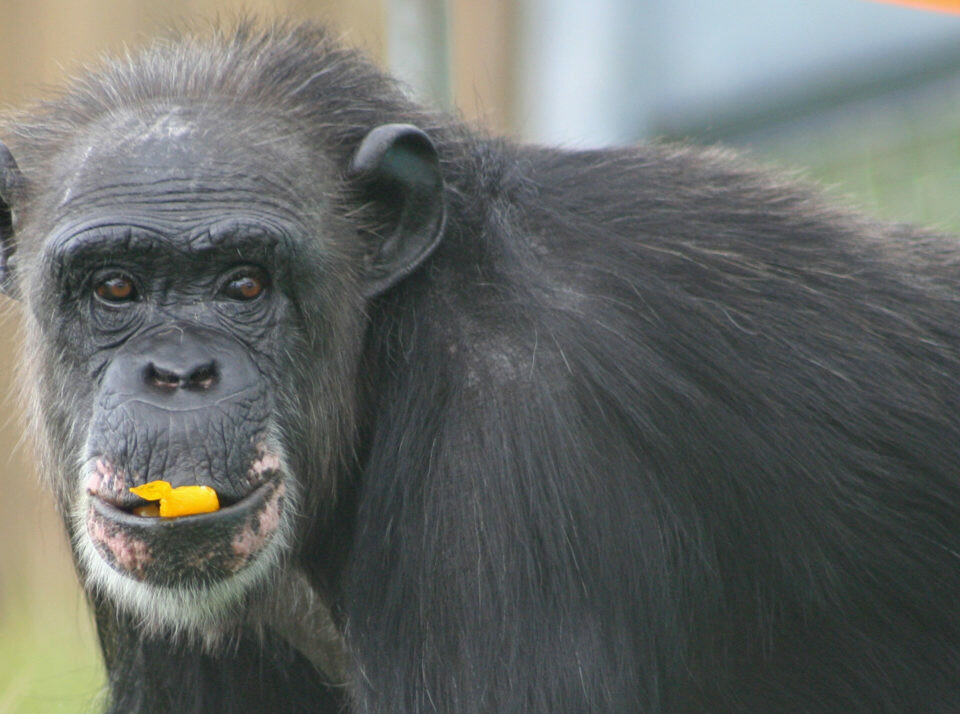 Hello, my name is
Rebecca

I was born in the wild and brought to Holloman Air Force Base near Alamogordo, NM, in 1974, just a year before it became illegal to import wild-caught chimpanzees into the U.S. Then I was transferred to a private laboratory in Alamogordo called the Coulston Foundation, a now defunct laboratory with the most Animal Welfare Act violations in history.

I was initially used as a control subject for a hepatitis study. I had my blood drawn weekly for five months and underwent five liver biopsies during that time. I was later put in a gonorrhea study in which I was inoculated with a strain of gonorrhea; I then had weekly sedations for blood and cultures for seven months. After another toxicology study, I was reassigned to the breeding program where I was impregnated at least eleven times. Most of my pregnancies ended in miscarriage, though I have three surviving children, all of whom were taken from me at birth: Gunther, Libby, and T.J. As of 2014, my children are believed to be living at the Alamogordo Primate Facility, a chimpanzee holding facility on Holloman Air Force Base. I had at least seven stillbirths. Some of these failed pregnancies left me with symptoms such as bleeding, shakiness, and decreased appetite. Throughout my nearly 30 years at the Coulston Foundation, I was regularly sedated for liver biopsies and for checkups, even throughout my difficult pregnancies. Notes in my file say I was difficult to sedate with a dart gun, and that I was unfriendly to humans. A fear of water was also noted for unknown reasons.

In 2002, the Coulston Foundation went bankrupt and Save the Chimps rescued me and 265 other chimpanzees. Today I live in a chimpanzee family known as Tanya’s group, and I love living my life on a spacious island in sunny Florida. I used to be aggressive towards humans, but I now cheerfully greet my caregivers every morning. I am a quiet, serious, and kind chimpanzee who enjoys the company of my friends, especially Debbie, a fellow elderly chimpanzee. The two of us can often be seen resting in our favorite oak tree on our island. I also love to eat! I can be heard giving my distinct food grunt, which sounds more like a happy moan, upon eating almost any type of food. I particularly love vegetables, especially kale. Although I tend to be quiet and reserved, I am a very beloved member of my family. I love to relax and groom with friends on our island. I am a superb nest-maker, and will often gather as many blankets as I can to make massive, cozy nests. I like to stay out of the fray, but I always carefully observe any commotion within my family and offer reassurance to any chimpanzee who might be upset. My gentle, nurturing character makes me a pillar for my family.

Get to Know Rebecca