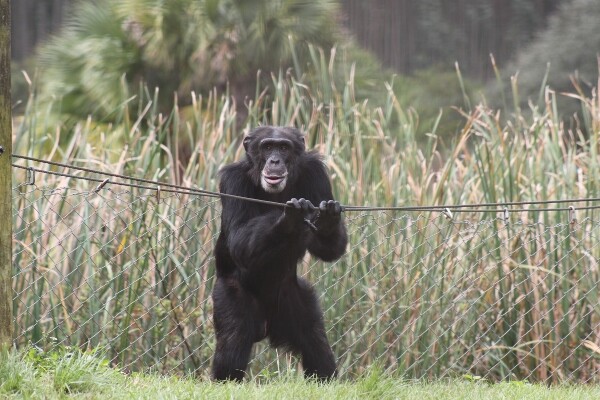 Hello, my name is
Pumpkin

I was born on October 27, 1986, at the Laboratory for Experimental Medicine and Surgery in Primates (LEMSIP) in New York State. My father is unknown, and my mother was known only as “CH-136.” I was occasionally taken from my mother for physicals, but otherwise, I was allowed to stay with her until July 5, 1988.

I was not quite two years old when I was taken from my mother. I was terrified and confused, and can only imagine the sorrow she must have felt at losing me at such a young age. That’s when my nightmare began. Over the next eight years, I was anesthetized with ketamine approximately 180 times, and endured at least 23 painful liver biopsies. When I was five years old, I started self-mutilating, creating wounds on my abdomen, side, and legs.

In October 1996, just before my tenth birthday, I was sent to the Coulston Foundation, a research laboratory in Alamogordo, New Mexico. The Coulston facility had a poor record of animal care, with several violations of the Animal Welfare Act. Ironically, though, the move to Coulston was actually an improvement for me. I was also introduced to a small group of chimpanzees, including two older females from Coulston, Rebecca and Edith, and two other chimps from LEMSIP, O’Dell, and Jaybee. I also had a chance to go outdoors for the first time in my life. Nevertheless, I continued to frequently self-mutilate, causing severe wounds on my abdomen and legs. Medications were prescribed in an effort to reduce these behaviors, but my emotional scars were deep.

On September 12, 2002, I was rescued by Save the Chimps (STC) and my life in a research lab came to an end forever. For a while, I continued to self-mutilate when I was stressed or bored, but thanks to the attentive care of my veterinarians and caregivers, I haven’t engaged in those behaviors for some time. My caregivers call me “Mr. P” and tell me that I am extremely handsome. I must say that I do have a striking face, and I am known for my kind and gentle soul.

I love basketballs and will often carry one wherever I go—at least until it deflates! I also like wading pools—and filling the wading pool with basketballs! Due to my years of confinement, I prefer to stay indoors, where I often hang out with my longtime friend O’Dell. Sometimes I sit outside when no one is looking, and every now and then I even venture away from the building that I call home, to browse for nuts and seeds our caregivers scatter in the grass.

Despite his affection for O’Dell, he has branched out quite a bit and become closer with many other chimps in his social group. Caregivers have recently noticed him spending so much time with Hailey that they jokingly refer to her as Pumpkin’s girlfriend! He is also very protective of a sweet female named Opal. He was spotted helping her one day when she was scared during a scuffle between males in the group. Pumpkin waited for her to calm down, and when she was ready, he put his arm around her and led her away from the dispute.

Pumpkin now does a great job of letting his caregivers know when he begins to feel distress tied to his past trauma. When he feels anxious, he sometimes picks at his old scar from where he would self-harm when he lived in the lab. But now, he knows to point to his enrichment we keep set aside for him, which helps distract him from his feelings of anxiousness. When he does this, we know he is having a hard time and needs the distraction, allowing us to help him in a truly significant way. His anxiousness has become even more infrequent and we think companionship and excellent enrichment opportunities have made all the difference. His ability to heal is truly an inspiration.