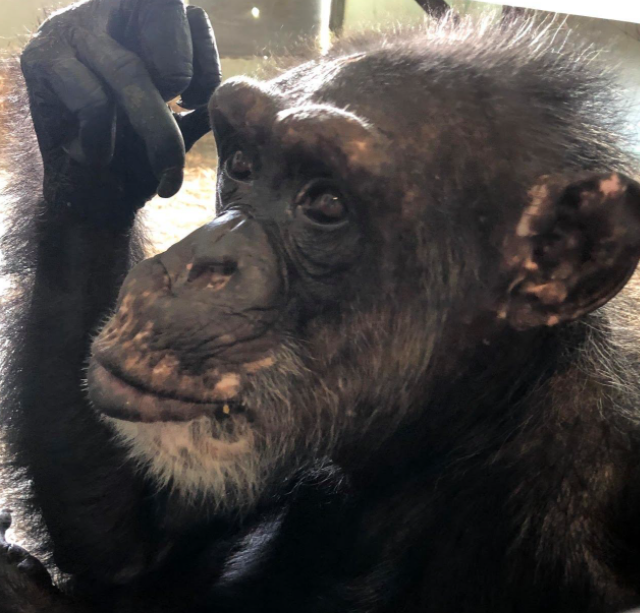 Hello, my name is
Plum

I was born to my mother pudding on April 27, 1983, at the Laboratory for Experimental Medicine and Surgery in Primates (LEMSIP), a notoriously dismal lab in New York. I was assigned to my first study at the tender age of eleven months. Over the next twelve years, I would be sedated with ketamine over 150 times. Depending on the study this would have been a weekly or monthly occurrence. During this time, I also had twenty liver biopsies. When the decision was made to close the doors of LEMSIP, many of the chimps were sent to The Coulston Foundation to continue a life of being used for experimentation. At the age of thirteen, I traveled from New York to New Mexico along with other chimps from LEMSIP. I was placed in my next study a year later.

I was then rescued by Save the Chimps, and then was migrated to Florida in September 2011 and eventually became part of a large family named after my sister Tapioca. I’ve been more of a “chimp’s chimp” preferring the company of chimps over humans. Although I don’t always seek out attention from my caregivers, I do interact with them. Ever since I’ve been rescued, I’ve made new chimp friends and a new world has been opened up to me. Now it’s time for me to enjoy retirement and all the perks that come with it!