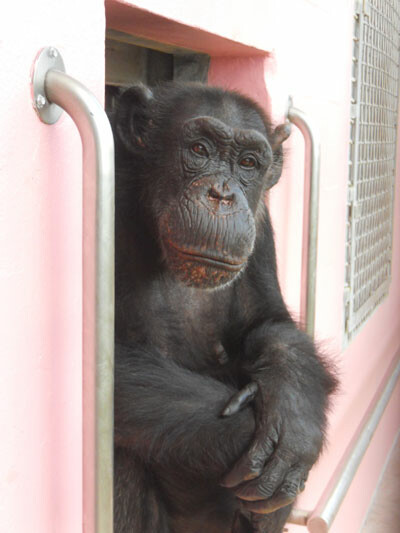 Hello, my name is
Peggy

Peggy, one of the grande dames of Save the Chimps, passed away on August 20, 2011, at the age of 48. Affectionately nicknamed “Peggy Sue” by her caregivers, Peggy was beloved by both chimpanzees and humans. Her dignity, strength, and capacity to forgive were core strengths of her character that serve as an inspiration to us all.

Peggy was most likely born somewhere in Africa in the early 1960s. She was captured as a child and eventually ended up at the Institute for Primate Studies (IPS) in Norman, OK. When IPS closed in the early 1980s, Peggy was sent to the Laboratory for Experimental Medicine and Surgery in Primates (LEMSIP), where she resided for 15 years. At LEMSIP, she was darted with ketamine 163 times, was subjected to 16 liver punch biopsies, and had six children. Unlike so many of the chimps at LEMSIP who were forced to endure years of isolation, Peggy sometimes resided with other chimps, including Lulu, a resident of Black Beauty Ranch, and Mona, who was rescued by Save the Chimps in 2011.
When LEMSIP closed, Peggy was sent to yet another lab, The Coulston Foundation (TCF), arriving September 17, 1996. Although she was assigned to one study while at TCF, the number of times she was subjected to anesthesia decreased markedly, enduring 16 “knockdowns” in her 6 years at TCF. She also gave birth to a daughter, Kiley, who was taken from her. Just one day shy of her 6th anniversary at TCF, Peggy was rescued by Save the Chimps, on September 16, 2002.

The trials that Peggy endured in her life at the hands of humans could have turned her against her new caregivers forever. But she accepted us with grace and kindness, and enjoyed the positive changes in her life.  Peggy became a member of the first complete chimpanzee family to migrate to Florida, which came to be known as Alice’s Group. Peggy was instrumental in the success of this family, which was composed of chimps who had traumatic pasts and little social experience. She became an adoptive mother to young Elway and Pamela, guiding them as if they were her own children. Jeffrey fell in love with her (although his passion may have been unrequited.) She developed deep and abiding friendships with fellow LEMSIP veterans Carrie, Thelma, Melissa, and Tash. She was especially connected to Carrie. When Carrie passed away, her ashes were scattered on the island, near her favorite tree and platform. Afterwards, Peggy went out onto the island and immediately visited these spots and began crying. We have never witnessed such behavior before or since.

Peggy enjoyed the company of her chimpanzee family, her caregivers, and the beauty of her island until her final moments. She passed away peacefully, nestled in the cool grass on a sunny Florida summer day. She was a remarkable, beautiful soul who is deeply missed. May Peggy’s spirit inspire us all to be a little more kind, a little more forgiving, and to always treat others with dignity.
If you knew Peggy Sue, then you’d know why I feel blue, about Peggy,
my Peggy Sue.  Oh well, I love you gal, I love you Peggy Sue…