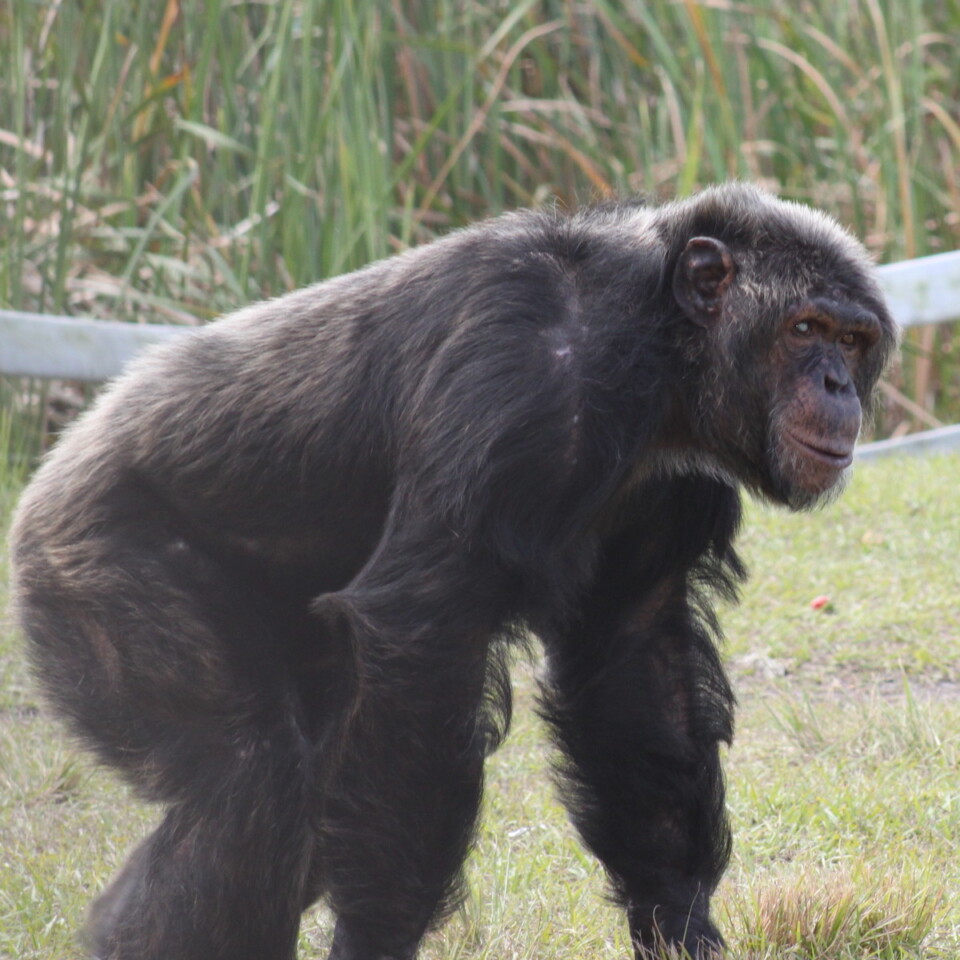 Hello, my name is
Oliver

For the first thirteen years of his life, Oliver was shuttled between three different research labs before finally finding sanctuary at Save the Chimps. Oliver was born February 22, 1989, at the Southwest Foundation for Biomedical Research in San Antonio, TX to his mother Lisa and father Eric. He remained with his mother for one day before being removed from her and taken to the laboratory nursery. Just before his third birthday, Oliver was assigned to a research study. Little Oliver was held down while a nasogastric tube was pushed up his nose and then down into his stomach.  An unknown compound was delivered into his stomach; who knows what long-term effects this mysterious substance had on Oliver’s body.

Just two months before his fourth birthday, Oliver was shipped across the country to another research lab known as Bioqual. He spent a little over three months there, having a virus sprayed into his nose and trachea, before being shipped back to Texas. In the spring of 1998, he was packed up again, and sent to The Coulston Foundation (TCF) in New Mexico, the largest and most notorious chimpanzee research lab in the country. There, Oliver was assigned to an extremely invasive and painful experiment: The Spinal Dynamics study. In this study, chimpanzees underwent surgery to remove a healthy spinal disc from their neck. The disc was replaced with an experimental prosthesis. Approximately four months after receiving the prosthesis, Oliver underwent another surgery to have it removed. There is no evidence that Oliver received pain medication after either surgery and nothing was put in place of the prosthetic. Oliver was left without a spinal disc between two of his vertebrae.

In 2002, Oliver’s life changed when he was rescued by Save the Chimps. He would never undergo a biomedical research protocol again. He quickly became familiar—and beloved—by his new caregivers in part due to his unusually light face and robust jaw, features he shared with his half-brother Garfield, one of the first residents of Save the Chimps. Olly, as he was known, also had an unusual hunched posture—perhaps due in part to the missing disc in his spine. He loved blankets, and often carried a large pile of them for comfort. Oliver did find it challenging to adjust to social life with other chimps, but he at last became a member of Late’s group. Together he and his new family embarked on one final journey, this time to a beautiful island home in Florida. Oliver embraced island life, experiencing the chance to run and roam over hills for the first time in his life.

Much to our shock and sorrow, Oliver succumbed suddenly to cardiac fibrosis, a largely undetectable and untreatable form of heart disease that is seen all too often in captive chimpanzees. Not two hours before his passing he had been spotted out on his island, out and about with his fellow chimpanzees.