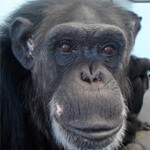 Hello, my name is
Nadia

I was born in the early 1960s, most likely somewhere in Africa. I was captured and
brought to the Cheyenne Mountain Zoo in Colorado Springs, arriving on March 13, 1963.
I was given the name Martha. In August 1976, I was sent to Holloman Air Force
Base in Alamogordo, NM. My name was changed to Nadia, and I was used for the
next 26 years as a breeding female.

My first child was born in 1979, and he was taken from me at birth. I went on to
have five more children, all of them taken from me as soon as they were born. I also sadly had two incidences of stillbirth, including that of twins, which drove me into depression.

In 1997, I was transferred to the Coulston Foundation, a biomedical research
lab also located in Alamogordo. I moved into a dismal building (later dubbed “The
Dungeon” by Save the Chimps). The one bright spot in my life was Vanna, a young
female who shared a tiny cage with me in the Dungeon. I became like a mother to
Vanna, who had epilepsy. I would hold Vanna in my arms as we slept, and stand over her protectively if she had a seizure.

In 2002, my life changed when Save the Chimps took over the Coulston Foundation, rescuing Vanna and me. Today Nadia and Vanna live at Save the Chimps’ island sanctuary in Fort Pierce, FL. They are members of a chimpanzee family known as
Ron’s Group. Although they enjoy the freedom of a three-acre island, Nadia prefers to
relax indoors where she enjoys painting as a form of enrichment.

To support Nadia in her forever-home, donate today.