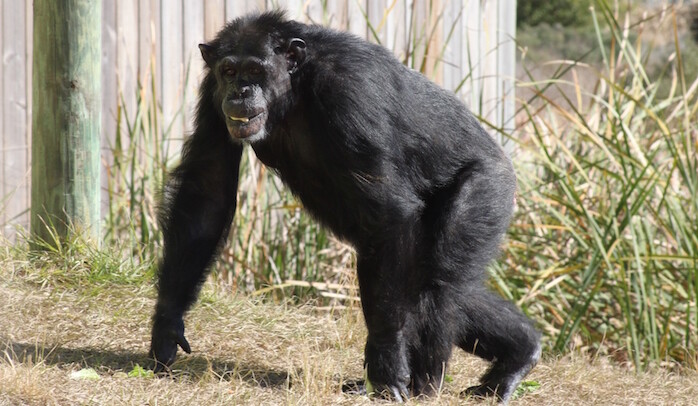 In loving memory of
Mary Jane

Take me as I come, ’cause I can’t stay long…

The Save the Chimps family bid a tearful goodbye to the beautiful Mary Jane, lovingly known as MJ, on October 13, 2014. Mary Jane had suffered what appeared to be a stroke on October 10 and passed away in her sleep three days later at the estimated age of 41. Mary Jane was a strong, dignified soul, and she is deeply missed.

Mary Jane may have been born in the early 1970s, but where and when is not known. Perhaps she was born in Africa prior to the 1975 ban on importing wild-caught chimpanzees; perhaps she was born at a breeder or zoo in the United States. She spent some portion of her life at Monkey Jungle, a zoo in Miami, FL. On October 11, 1985, she was sent from Monkey Jungle to Buckshire Corporation, a primate research facility and dealer in Pennsylvania. Mary Jane remained at Buckshire for five months before being purchased by The Coulston Foundation, a primate research laboratory in Alamogordo, NM. Mary Jane arrived at Coulston with five other chimpanzees, including a female named Mickey. Mickey would become MJ’s dearest friend.

Three weeks after her arrival at Coulston, Mary Jane was placed in isolation and became a subject in a biomedical research protocol. She was darted and anesthetized with ketamine weekly for 19 weeks, and subjected to blood draws and liver biopsies. A year later, she was assigned to the breeding colony.

Mary Jane gave birth to four children, and miscarried a set of twins. Although her file notes that she was an excellent mother, she was not allowed to raise her children. All were taken from her and raised in the laboratory nursery, with the goal of producing as many babies from her as possible. (Normally, a mother chimpanzee will give birth at most every 5-6 years.)

The year after her last child was born, Mary Jane was briefly used in two research protocols. She was also held for a study in 2001, but the records are not clear on whether the study was ever conducted. By this time, The Coulston Foundation was in extreme financial difficulty following the loss of grant funding due to serious violations of the Animal Welfare Act.

In 2002, Save the Chimps took over The Coulston Foundation, rescuing Mary Jane and more than 250 other chimpanzees. Mary Jane was found living in “The Dungeon,” a dismal building consisting of 48 small runs, most housing one chimpanzee each. Mary Jane, however, was one of the “lucky” ones (if you can call her lucky.) She lived with Mickey, and the two ladies were clearly very close friends.  But not even the comfort of a chimpanzee friend could erase the boredom and depression apparent in their eyes, as evidenced by an early photo of Mickey and Mary Jane curled up on a bench in their barren cage.

Thankfully, Mary Jane and Mickey soon left their despair behind and embarked on a new life filled with energy and hope. They joined Freddy’s Group, one of the two largest chimpanzee groups at Save the Chimps. They went from having only each other, to enjoying the company and friendship of 24 other chimpanzees. Mary Jane was highly respected in the group. Besides Mickey, she also became very good friends with Spock, the eldest male in the group, who sadly passed away earlier this year. Then, Mary Jane found herself on her way back to Florida, this time to retire and spend the rest of her years on a spacious island complete with a covered bridge. Joined by Mickey and the rest of Freddy’s family, Mary Jane was thrilled with her newfound freedom. She loved the outdoors, and claimed a favorite spot on the covered bridge. “She also loved hammocks,” says Ester, one of Mary Jane’s caregivers. “Whether she was inside for a meal, or outside enjoying her day, you could often find her in a hammock.”

Mary Jane was beloved and admired by her caregivers. “She was very regal,” remembers Teresa. Crystal was struck by MJ’s devotion to Spock when he began showing signs of cardiac disease. “When Spock wasn’t feeling well, Mary Jane was always by his side,” she recalls.

After Mary Jane had her stroke, her mobility became compromised and it was necessary to keep her inside for treatment. A few gentle chimps, including Mickey, stayed with her. Mickey was very loving to Mary Jane, carefully grooming her. At one point, Mickey became distracted and moved a short distance away from Mary Jane. Mary Jane reached out to her and stroked Mickey’s arm, as if to say, “Don’t go too far, my friend.” Mickey returned, and gave Mary Jane a reassuring kiss. Perhaps they both knew that their time together was drawing to a close.

Mary Jane is survived by her four children: Garth and Fergus of Save the Chimps, and Randy and Nicki of the Alamogordo Primate Facility at Holloman Air Force Base. Mary Jane is also survived by her beloved friend, Mickey, whose spirit, optimism, and love for life in the wake of her friend’s death has inspired all who know her. Our sweet MJ lives on in the hearts and minds of the rest of her family—the chimpanzees and the humans who knew and loved her.

MJ, we love and miss you so much. We’ll take good care of Mickey. Give Spock a kiss for us.

For you and I will meet again…

–“You and I Will Meet Again,” Tom Petty and the Heartbreakers