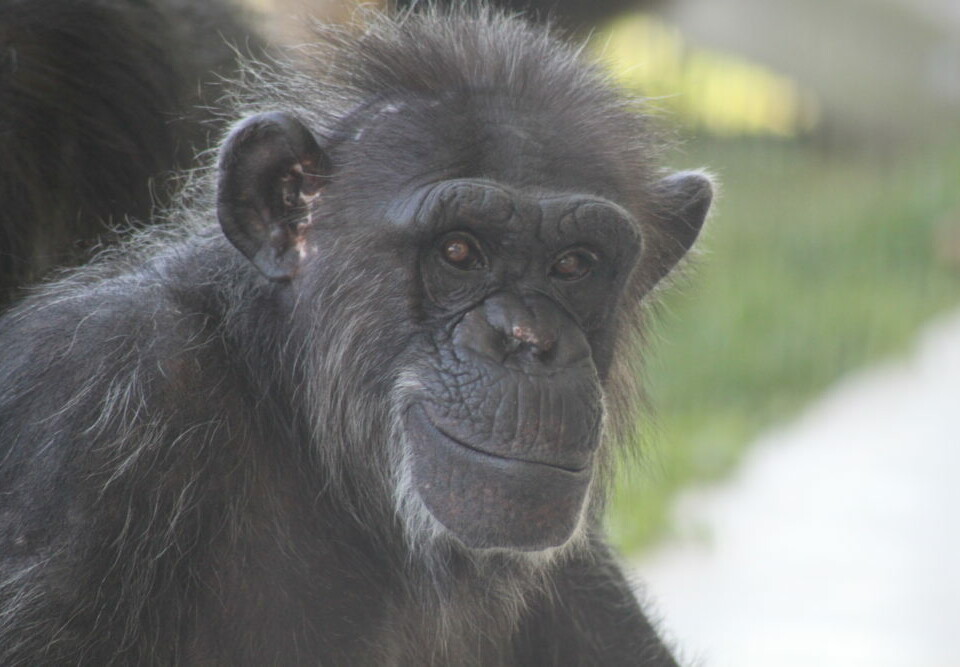 In loving memory of
Linda the 2nd

Linda’s early life story is a sad and mysterious tale from her birth in an unknown location, to frequent moves between multiple laboratories in her early years, and a gap of 15 years for which there are no records on her. Fortunately, Linda’s story does have a happy ending.
Linda was estimated to have been born in the late 1960’s or early 1970’s. Her birthplace and parents are unknown. Given her age, it is possible that she was born in Africa and her mother killed so that young Linda could be captured and brought to the US for use in biomedical research. She was acquired by the pharmaceutical company Merck, Sharpe & Dohme in October 1977. In August 1979, Merck sent Linda to Holloman Air Force Base where they called her Becky. She lived at Holloman for a mere 8 months, where she was used in vaccine study. During that period, she was anesthetized 36 times and received 8 liver punch biopsies. She was never prescribed any pain medications following the biopsies. In April 1980, Linda was shipped back to the Buckshire Corporation which housed Merck, Sharpe & Dohme’s chimpanzees. Merck did not keep her for long however, and in October 1980 Linda was sent to the Gulf South Research Institute (also known as New Iberia Primate Research Center). Linda remained in New Iberia for five months and in March 1981 was shipped back to Alamogordo.to the custody of the newly established White Sands Research Center, later known as the Coulston Foundation. Linda is assigned the number CAO001—the first chimp in Dr. Frederick Coulston’s private laboratory.
There are no records in Linda’s file from 1981-1996. We do know that she gave birth to three children between 1982-1988: Dakota, Candi, and Bam Bam. A fourth child, Serena, was born in 1997, but died just weeks later. From her son Bam Bam’s records, we know that Linda was a good mother. Despite this Bam Bam was taken from her after just three days. We can only imagine the sorrow this must have caused Linda. Between 1997 and 2001, Linda was anesthetized twice a year for physicals.
In 2002, Linda’s life changed forever when she was rescued by Save the Chimps. Save the Chimps immediately improved the life of the chimps by forming social groups. When Linda finally had the opportunity to meet other chimpanzees, she made fast and devoted friends with Sally and Alison. They were together until the end. In 2007, Linda, a member of Carlos’ Group, moved with her best friends Sally and Alison from New Mexico to her final home in Florida where she would live out her years on a large, hilly island. Linda fell in love with island life and could often be seen relaxing on the hills and platforms, basking in the sunshine.

Linda, Sally, and Alison were quite a force to be reckoned with. In the wild, male chimpanzees inherit the right to be dominant over all the females, but in captivity that does not always hold true. Linda made sure to correct that notion and soon all the males were showing reverence to these three older women. Sally was particularly close to Linda and Linda looked after her as any best friend for life would. Linda loved being out on the spacious island more than anything in the whole world, and wherever she went, Sally and Alison were sure to follow. When they would come in each evening, Linda would make an incredible nest using blankets, paper, boxes and branches and anything else she could gather to make the coziest of sleeping spots. We wish she could have built her nests in the wilds of Africa rather than at the Sanctuary, but at least here she had friendships, respect, nutritious food and fresh nesting material every night. When she died of heart failure, both Alison and Sally grieved. Sally sought comfort from Howard, a kind and handsome fellow who patiently helped her through her grief by hugging her, grooming her and just sitting nearby. We are happy to report that although Alison and Sally don’t explore the island as often as they used to, they appear to have found peace with Linda’s passing. We are grateful for all the time these ladies were able to spend together in the peaceful and dignified retirement they so deserved.
After all you had been through, Linda, you taught us the beauty of friendship, love, and forgiveness. You lived your days at the Sanctuary to their fullest and you will be missed dearly.