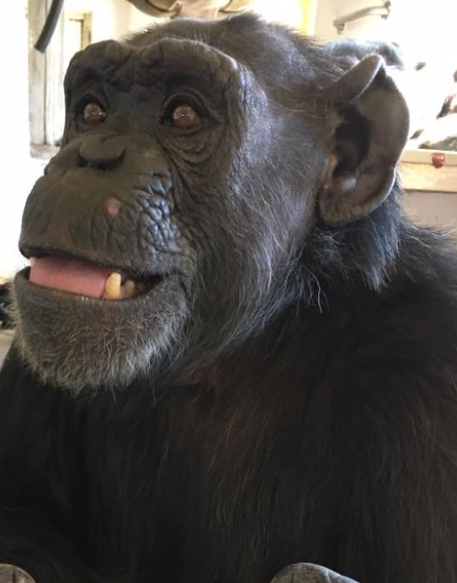 Hello, my name is
Lauryl

I was born on August 10, 1987, to parents Cherry and Marc in a research laboratory. I stayed with my mother for approximately two and a half years but after that things got stressful for me. I was placed in several groups within the lab, but had a difficult time with chimps picking on me and causing stress. Throughout the years I would receive quarterly exams and be placed on a study involving blood draws every three days for two months. During one of these exams, it was discovered I had a gynecological condition that would make giving birth difficult. As a result, I had excessive tearing and bleeding with the birth of my first baby. There is no record of this baby in the database from the lab but it is assumed he/she was taken away immediately. In May 2000, I gave birth to Rowan who was also taken away on the first day.

In 2002 I was among the 266 chimpanzees rescued from the Coulston Foundation by Save the Chimps. I became a member of Rufus’ family, the largest social group, and moved to Florida where we share indoor housing attached to a beautiful 3-acre island to explore. Although Save the Chimps does not breed, in June of 2007 I gave birth to Leo as a result of a failed vasectomy in his father, Rufus. I held him so tightly it would be weeks before staff could see him close enough to tell if he was actually a boy! I continue to follow my son closely and am a loving mother. He is now all grown up and alpha of the group but that doesn’t stop me from keeping a watchful eye on my son! I am enjoying retirement to its fullest with the companionship of my family, loving daily care, and the freedom to choose how I’d like to spend my days.