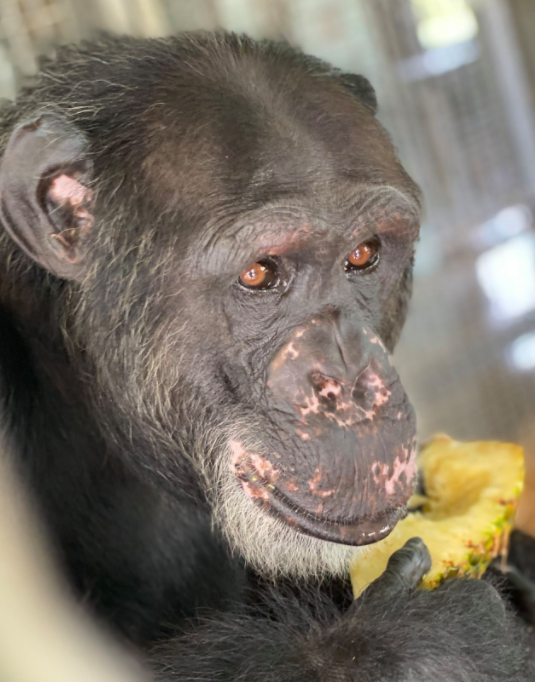 Hello, my name is
Kaleb

I was born in the late 1980s to a breeder who sold chimps as pets. I was purchased by a couple in Texas who raised me as their son. They eventually acquired additional chimpanzees as well as other exotic species and operated a small zoo. I had some exposure to the other chimps, but I preferred the company of humans. When the zoo closed, most of the residents were sent to other zoos or breeders. My human parents opted to keep me until some space in a sanctuary could be found for me.

Save the Chimps agreed to take me in, and I became a resident of the sanctuary in 2011. As my human family came to realize, chimpanzees do not make appropriate household pets. They grow up quickly and by the age of 5 are as strong as an adult human. Eventually, they grow too powerful and dangerous to live in a home and must spend the rest of their lives in a cage. Former pet chimps often have little experience living with other chimps, and may even consider themselves human. Fortunately for me, despite my limited experience with other chimpanzees, I learned quickly how to enjoy life with other chimpanzees. I live with a large chimpanzee family, including my best friend Lisa, and two other former pet chimps, Connor & Kramer. Together we and the other members of our chimpanzee family, Ron’s family, enjoy the freedom of a three-acre island, where I can often be seen running over the hills.