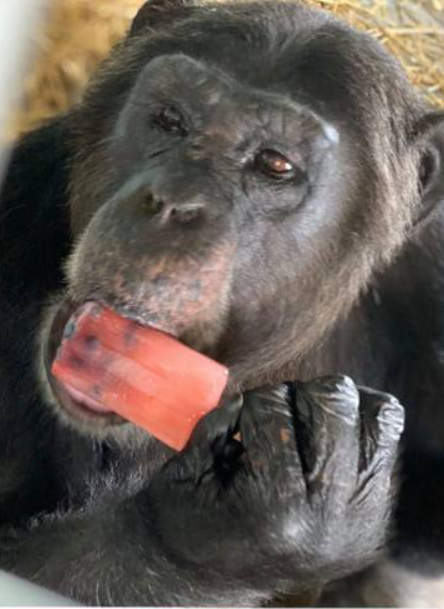 Hello, my name is
Jordan

I was born January 24, 1994, to my mother Jacqueline and my father Hanzie on the Holloman Air Force Base in Alamogordo, NM. I was born by C-section, and I was never seen or held by my mother. I was raised in a nursery by humans and underwent two surgeries before I was two years old, one to remove an unidentified mass from my chest, and one to repair an inguinal hernia. When I was old enough, I joined a small group of chimps which included Minnie (a former space chimp), her daughter Lil’ Mini, Rebecca, Angelica, Belinda, and Kitty. In 1997, I was transferred to The Coulston Foundation (TCF), a research lab in Alamogordo, NM, when the Air Force awarded custody of its chimpanzees to TCF. Fortunately for me, I was never assigned to a biomedical research protocol.

On September 16, 2002, I was rescued when Save the Chimps took over TCF. On April 23, 2007, I traveled from New Mexico to Save the Chimps in Florida, and I have been loving island life ever since. I am a member of Ron’s Family, and I enjoy the companionship of many other energetic chimps like Connor, Kramer, Melody, Dylan, and Marlon. I love playing on the swing toys installed in my family’s indoor housing and I also like rolling around on scooter boards.