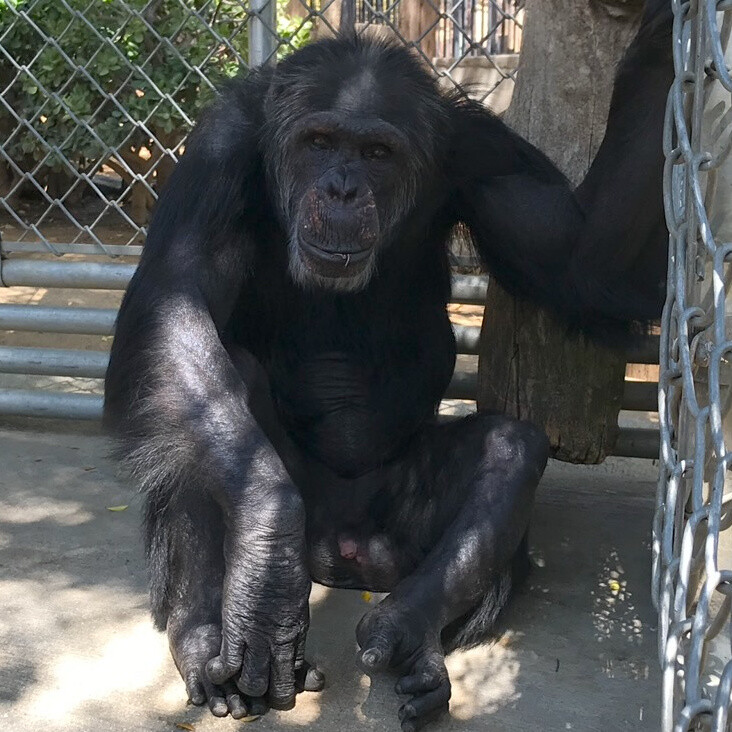 Hello, my name is
Jeff

Jeff was born in 1975 and by the time he was 15 months old, he went to live with his second owner. He was housed with other chimps and was trained for educational programs, as well as some movie and television work. In 1985, Jeff was one of the first chimps sent to the Wildlife Waystation, a sanctuary in California housing many different species of animals. Eventually, Jeff joined a larger group in a new chimpanzee housing area. All went along as expected until the Waystation learned that Jeff had become a father, with Ernesta, as the result of a failed vasectomy. His daughter Magic was born in 2004.

Jeff likes to open presents, paint, and nap in the morning sun. He is a great communicator with other chimpanzees and his caregivers. If he sees something he wants outside of his enclosure, he will get their attention, point to it, and vocalize that he wants it. Jeff has a unique vocalization that echoes– unique because it sounds like an elephant! Jeff always has a smile on his face and is always eager to please.

The Wildlife Waystation closed its doors in 2019, leaving nearly 480 animals in need of a home including 42 chimpanzees. Jeff is among the last seven to be rescued from the Waystation. In 2022, he and his family are making their journey to their new permanent home at Save the Chimps.