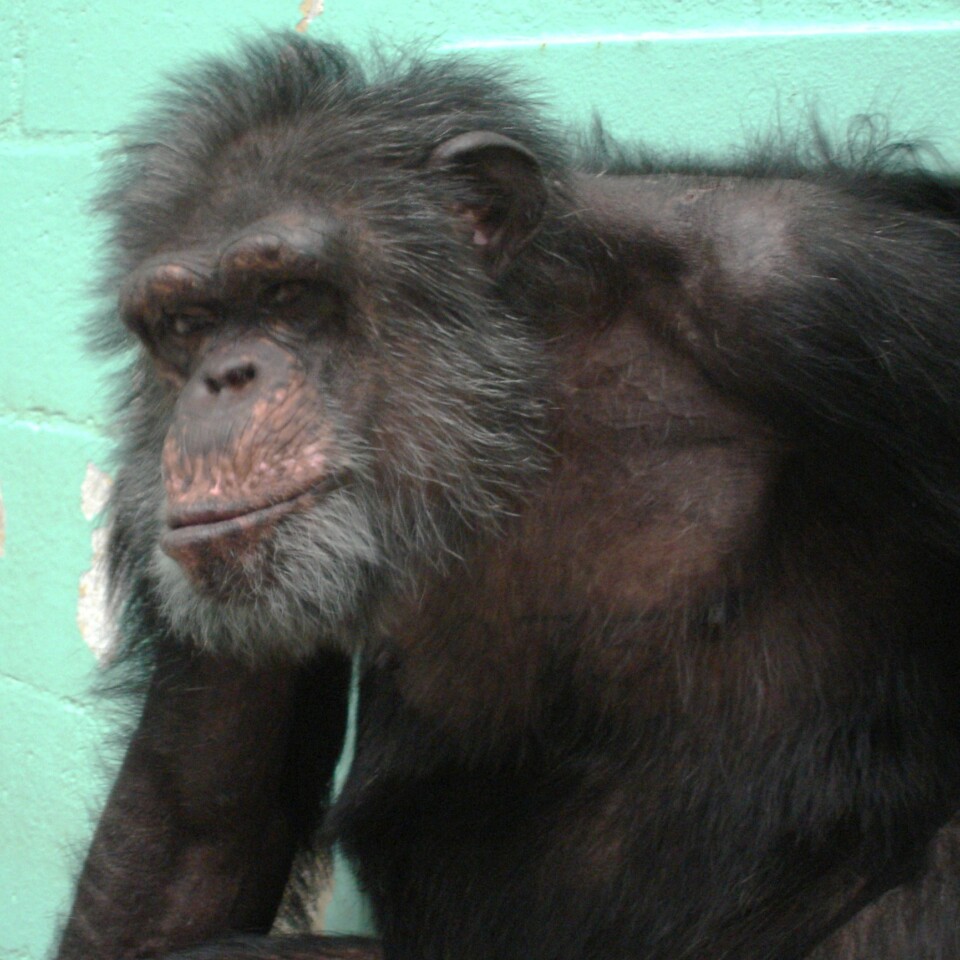 Hello, my name is
Jeb

Jeb, an elderly male with a unique heavy brow and freckled face, was a kind gentleman despite his horrific past.  His date of birth is listed as May 21, 1970, but since he was purchased from a known primate importer, and he looked much older than 43 years, Jeb was likely born in Africa sometime in the 1960s. He was acquired by the Air Force in the 1970s, and spent part of his life on loan to a lab in Maryland known as Litton Bionetics. Jeb was used extensively in a number of invasive medical research projects from a very young age. He was injected with a number of different foreign substances, including hormones and retroviruses, to test the effects on his body.

Jeb also received very questionable care: in May 1996, Jeb was reported to be lethargic and not using his left arm. He was anesthetized five times over a period of 9 days before it was discovered that he had a broken clavicle on the fifth examination. (There is no indication that his arm and shoulder were even examined during the previous four exams, and no pain medication was prescribed during that time period.) Jeb must have been suffering in silent agony for those nine days.

Jeb also spent part of his life in the breeding program at The Coulston Foundation research laboratory, fathering seven children. Four of his children, Capone, Guilder, Marissa, and Rupiah, are residents of Save the Chimps.  Two of his daughters, Jo Ellen and Sakari, are believed to reside at Alamogordo Primate Facility, waiting for their turn to be retired to a sanctuary. His son Clayton sadly was denied the dignified retirement that he deserved; used in hepatitis C research, Clayton was euthanized this year at New Iberia Primate Research Center, due to kidney and liver disease.

Jeb was rescued by Save the Chimps in 2002, where he was found living with a group of fellow senior chimpanzees: Lou, Ted, George, and Roman. Jeb first became a member of Carlos’ Group and migrated to Florida in 2007, where he found a beautiful, spacious island waiting for him. When Carlos’ Group disbanded in 2010, Jeb became a beloved member of his old friend Lou’s Group.

Jeb was a sweet old man with an eye for the ladies. He preferred the company of his fellow chimpanzees, especially his paramours Olivia and Opal. He was also a surrogate father to young Braedon, whom we hope learned well from Jeb’s guidance. He seemed to regard humans as his waiters and housekeepers (and he was right to do so!) He was especially fond of oranges and peanuts, two of his favorite foods. After being locked away in a barren cage for decades, he relished his new life in Florida. He loved the outdoors, and he spent as much time as possible with grass under his feet and blue skies overhead. Perhaps he retained some memory of his brief childhood in an African forest, but we will never know. It is fitting that Jeb’s last moments were spent outside, watching the sun rise one warm Monday morning. He passed away suddenly of heart failure out on his island, in the company of his chimpanzee family.