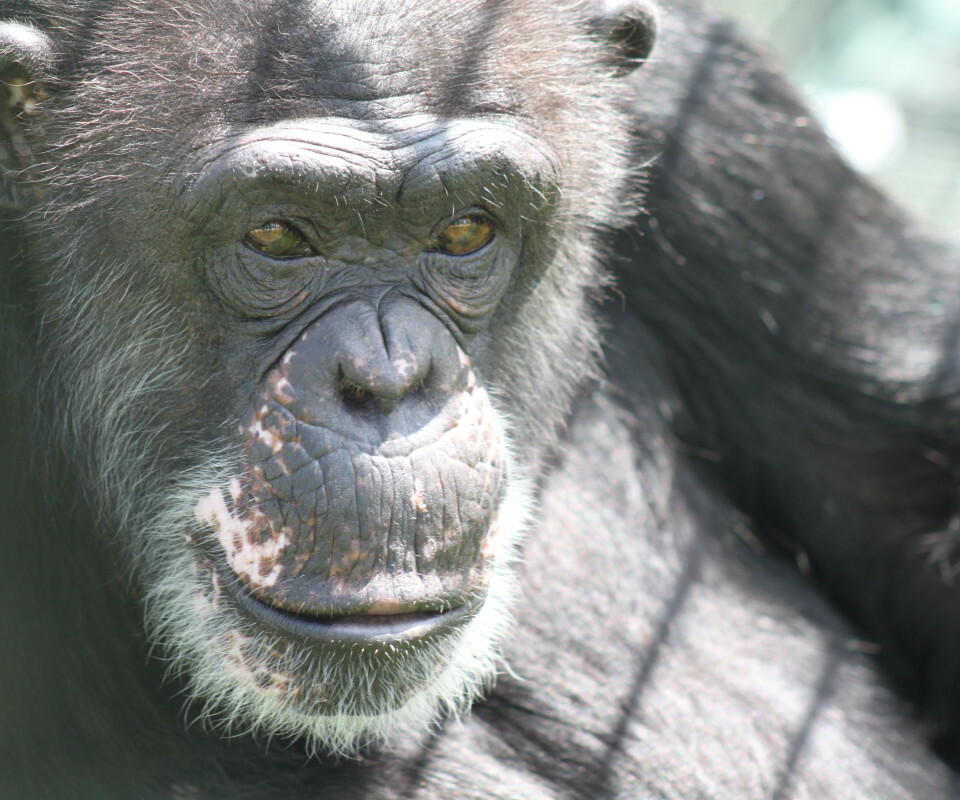 In loving memory of
Indie

I was born on August 13, 1985 at the now-defunct Laboratory for Experimental Medicine and Surgery in Primates (LEMSIP) in New York state. Upon my birth, notes in my file describe me as hypothermic, weak, and cold to the touch. I was taken from my mother and moved to the nursery, where I was placed in an incubator and given IV fluids. At four months old, I was diagnosed with bronchitis and severe wheezing, which is not uncommon for baby chimpanzees reared in nursery settings. Shortly after my diagnosis of bronchitis, I underwent an attempted punch liver biopsy procedure. A total of three attempts at the procedure were unsuccessful. Two weeks later, at less than five months old, I received an open liver biopsy, in which my abdomen was surgically opened for the procedure. This was the first of countless procedures I would endure in my 17 years in biomedical research labs.

Throughout my years at LEMSIP, I was typically sedated weekly, though occasionally every other week, for blood draws and liver biopsies. During one study, I was sedated five times in one day. When chimpanzees were actively in study protocols at LEMSIP, we were isolated in 5’ x 5’ x 7’ cages suspended from the ground. By the time I was four years old, I had endured 21 liver biopsies. I also suffered from chronic tonsillitis, with intermittent infections for over ten years.

I was 11 years old when LEMSIP closed down in 1996.  I was then transferred to the Coulston Foundation (TCF), a notorious laboratory in Alamogordo, New Mexico, with extensive Animal Welfare Act violations. Upon my arrival to TCF, the notes in my file described me as obese, and by 1999 my file noted that I had severe anemia of an unknown origin. I was placed in at least two studies during my time at TCF, in which I was sedated daily, every other day, or weekly. In 2001, my anemia became so severe that I had an emergency blood transfusion, yet no medical tests were performed to ascertain why my red blood cell count was so low. The blood for my transfusion was taken from a fellow Coulston Foundation chimpanzee named Rufus, who would later become a beloved resident at Save the Chimps, just like me.

Life changed dramatically for both Rufus and me in 2002, when the Coulston Foundation closed its doors due to bankruptcy resulting from their numerous Animal Welfare Act violations. Save the Chimps stepped in to rescue me and 265 other chimpanzees living in the New Mexico lab. Suddenly, fresh fruits and vegetables, enrichment, and clean enclosures became part of our daily routines. Most importantly, we were finally given the opportunity to socialize, providing us with the companionship that was vital for our well-being. Over time, we were each transported to sunny Florida and our new 3-acre island homes, landscaped with hills, trees, climbing structures, and platforms.

When Save the Chimps rescued me, I immediately captured everyone’s heart. Despite my years in isolation and confinement, I have always been a remarkably warm, friendly, and playful chimpanzee. I met my best friend, Cayenne, during our time in the Coulston Foundation, and we remain together to this day. We are often called “ambassadors” due to our welcoming and reassuring behavior towards newcomers. I am a very laid-back chimp, and am always ready to provide comfort to a distraught or anxious friend. Cayenne and I were introduced to Terry in 2013, not long after he arrived to Save the Chimps from a small zoo where he lived alone for 18 years. Cayenne and I immediately bonded with Terry, and have since helped him learn the ropes of chimpanzee society – from grooming and playing, to how to react during a dispute. Thanks to my friendship, Terry has grown into the confident and content chimpanzee he is today. Cayenne, Terry, and I are now members of Bobby’s family, where we have become especially close to Bobby.

I am as sweet to my caregivers as I am to my fellow chimpanzees. I am always full of laughter and have a wonderful sense of humor. I love being tickled with “tickle sticks,” which are repurposed pieces of garden hose the staff use to safely interact with the chimpanzees. I especially love to lie in the sunshine while being tickled or groomed. I have a distinct way of greeting my caregivers with a loud and excited vocalization, and love to initiate games of tug-of-war and chase.

I am a quirky girl and I have a few distinct, endearing habits. When I am laughing, I tend to throw one or both of my arms in the air, which seems to be a behavior unique to me. Sometimes when I laugh, I close my eyes tightly in a joyful expression. I have a dreamy air about me, and sometimes seem happily lost in my own thoughts. My infectious belly laugh can be heard daily when I play with chimps and humans alike. My unique personality embodies a genuine cheerfulness that wins the hearts of all who know me.