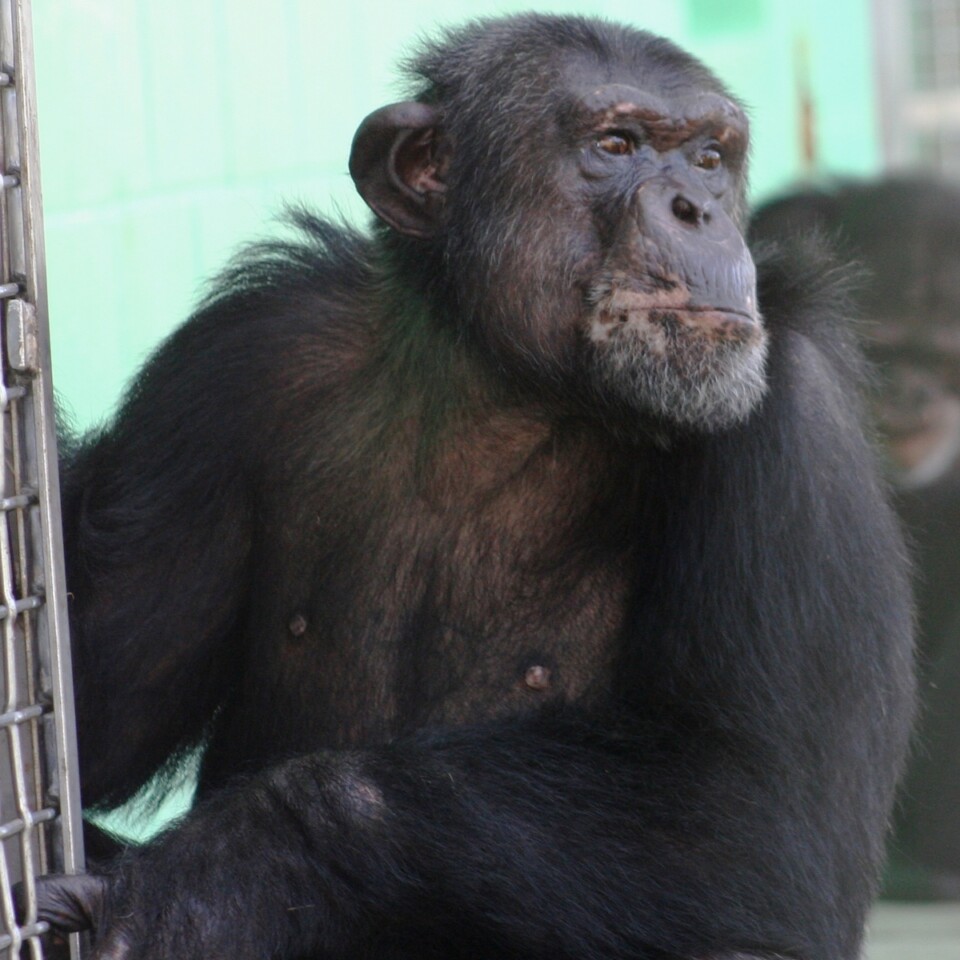 Hello, my name is
Huey

Huey was born in 1988 at the Coulston Foundation; his records state that he was a healthy, normal baby. His parents are listed as Wanda and Alvin. He stayed with his mother until November of 1990.  Shortly after that he was diagnosed with a severe case of gastro-enteritis, which required a long series of medication. As a toddler and into childhood he received quarterly physicals and he was put on a protocol in August 1997.  The file does not provide specific details about the study but it seems to have involved blood draws.  Throughout this time he was diagnosed with repeated respiratory infections which required treatment.

When Save the Chimps took over in 2002, Huey looked like an old chimp—slow-moving, gray-haired, and depressed. We were shocked to learn that he was just a teenager.

After changes to his social group, as well as better food and enrichment, Huey started to perk up, but physically, something wasn’t right. STC veterinarian Jocelyn Bezner observed that Huey exhibited scoliosis (curvature of the spine) and a severe tilting of his pelvis. He moved slowly and appeared stiff and uncomfortable, for which he was prescribed medications and nutritional supplements.

This treatment helped Huey, as did his move to Florida where the ability to freely roam in the warm sunshine agreed with him. His caregivers felt that he moved well, and had actually gotten younger over the years!

But given that Huey’s scoliosis was still apparent, Dr. Bezner invited Vero Beach chiropractor, Dr. Harrison Todd, to examine Huey. First he observed Huey’s movements while awake; then Huey was anesthetized for a physical, and Dr. Todd made adjustments to his back and neck.

Huey’s caregivers were asked to watch his movements over the next several days to see if they noticed any improvement. Since Huey’s caregivers felt that he was moving well prior to the adjustment, they were somewhat skeptical that any changes would be noticeable.

Much to their surprise, Huey exhibited increased energy, ease of movement, and playfulness the very next day! This allowed Huey to live his final years in more comfort until his passing in 2019. Huey’s stoic personality is missed by everyone at Saver the Chimps. Rest in peace sweet Huey. We are sorry for everything you were put through at the hans of humans.