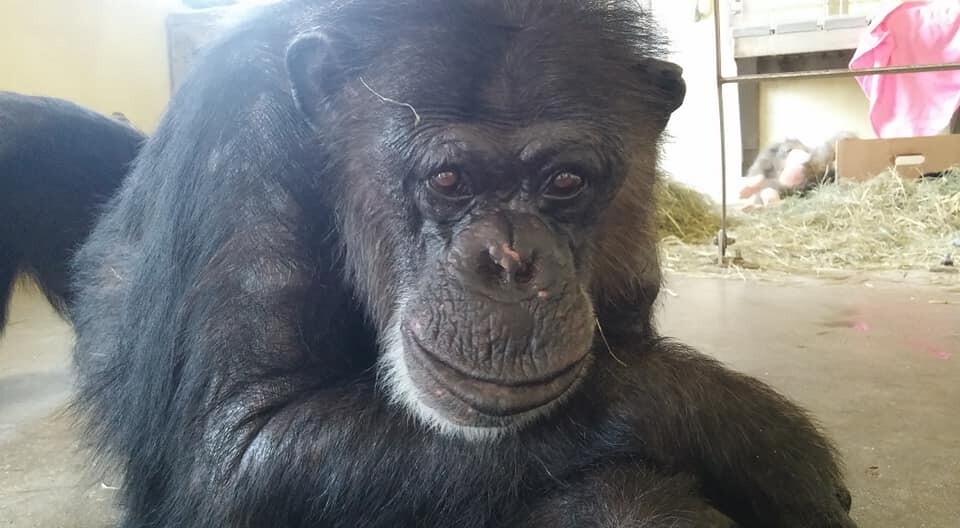 In loving memory of
Heather

With heavy hearts, we announce the passing of Heather, an elderly chimpanzee from Tanya’s Family. Heather was very much a “chimp’s chimp,” preferring to spend her time with her fellow chimpanzees rather than receive attention from her human caregivers. Heather passed away due to heart disease and was estimated to be nearly 50 years old. She was known for her love and devotion to her entire chimpanzee family.

Heather’s early years were poorly documented. We know that she was transferred to the Coulston Foundation, a now-defunct laboratory in New Mexico, in 1975 from another laboratory, but the details of her life prior to this are a mystery. It’s likely that she was born in Africa around 1970, which was sadly just before the establishment of the Endangered Species Act in 1974, which banned the import of wild chimpanzees to the United States. Heather was likely captured as an infant by poachers who killed her mother and other members of her troop before selling her into the biomedical industry. While this practice is now illegal, it does persist to this day and infant chimpanzees continue to be sold and smuggled, mostly for the pet trade, throughout the world. Once Heather arrived at the Coulston Foundation, her life did not get any easier. She was placed in toxicology studies and later used in the breeding program. Thankfully, she was able to have social relationships with other chimps, but it was a revolving door of social partners that depended on breeding schedules. At times she lived with chimps such as Gogi, Debbie, Tanya, Gromek, and Stella, who would all later end up living in her permanent family group at Save the Chimps. She was paired for breeding with many males and had at least four babies who were all taken from her upon birth and raised in the nursery. After her last birth, her file notes that she suffered from prolonged soreness and became depressed with a low appetite.

Everything changed for Heather in 2002, when Save the Chimps stepped in to rescue all 266 chimpanzees living at the Coulston Foundation, which was facing bankruptcy after repeated Animal Welfare Act violations. Right away, our staff noticed that Heather had little patience for humans and much preferred the company of other chimps. We could hardly blame her after all she had been through. When caregivers would hand out extra blankets or give Heather special juice, she made sure to let them know she did not appreciate their presence no matter what gifts they had for her! Over time, she tolerated humans more and more, but never showed them the same deep affection she showed to the members of her chimpanzee family. We all loved Heather beyond words, and it always made our hearts happy to see her out on the farthest corners of her island, peacefully napping, grooming, or exploring with her family members. And though we never demanded that Heather show us affection, on the very rare occasion she might present her wrist (which is a common, friendly chimp behavior) to one of us, we truly felt like a million dollars – like we had been granted the ultimate acceptance!

The process of transporting the chimpanzees from New Mexico to Florida took nine years, and Heather arrived to her new sanctuary home in 2010. Finally, Heather had an expansive island habitat with a close-knit family of chimpanzees. While she had a no-nonsense attitude with humans, she was completely devoted and gentle with her family. Heather was transported to Save the Chimps with her friend Debbie, and the two grew old together as best friends. She also became close with a male named Spike, a gentle giant who would happily hand over some of his food to Heather during almost every meal. And food was the way to Heather’s heart, there’s no doubt about that! Heather’s second favorite pleasure in life was grooming. On a daily basis she could be seen grooming with many of her group members, which was an indicator of how close she was with everyone in her family. Everyone from the highest to lowest ranking chimps loved to relax and groom with Heather. She had a calming presence that the others were clearly drawn to – even the most rambunctious males! She also loved sunshine and the outdoors, and was usually one of the first chimps to go outside to enjoy the island after breakfast each day. She would find the perfect sunny spot and relax for hours there with her closest friends.

Heather gave us a scare around two years ago, when we first discovered she had heart disease. Her health rapidly declined, and we all grew concerned that her time may have been approaching. But with a quick and proper diagnosis, the right medications, and love from her family, Heather surprised us all and fully bounced back. She had two more wonderful years with her family and we will be forever grateful for that. When she ultimately succumbed to her heart disease, her family rallied around her in the days leading up to it, especially Debbie. Debbie seemed very concerned at all times about Heather’s whereabouts and would not leave her side. She could see that Heather wasn’t able to move around as well as she used to, and when Heather wouldn’t get up for food that her caregivers offered, Debbie would roll the food closer to her so that she could eat. It was incredible to see how well Debbie took care of Heather in her time of need.

It’s hard to express how much we all admired Heather. Her resilience, devotion, and character made her truly remarkable. It never once hurt our feelings that Heather had little interest in humans. When it came down to it, we felt she owed us nothing and we owed her everything. We are so proud to have given her the life she deserved, and we will forever remember Heather as the embodiment of what sanctuary really means.

Rest in peace, Heather. We will miss you always.

Donate in her memory.