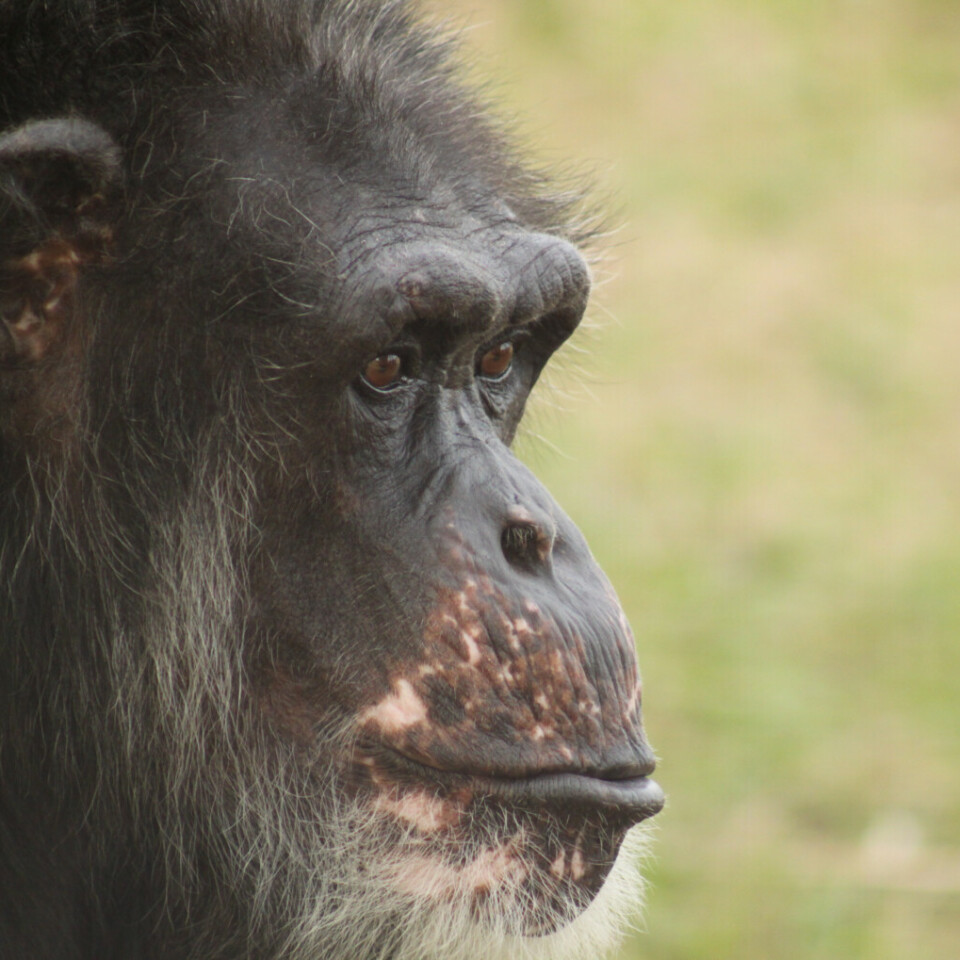 Hello, my name is
Gromek

If there was ever a role model for maintaining dignity in the face of a lifetime of adversity, it was Gromek. One of Save the Chimps’ oldest chimpanzees, Gromek was born in Africa, and was captured and brought to the US in the early 1960s. He endured incredibly invasive research, including the placement of electrodes into his skull and biopsies of his liver and kidneys. He found peace at last when Dr. Carole Noon secured his release in 2001. He made an immediate impression on her, and provided her with some of her fondest memories:

“The Air Force chimps were released onto the island on Dec. 11, 2001. That very first day, after exploring the island with his friends, Gromek assumed the position. Flat on his back, legs wide open since there was no wall to prop them against, Gromek stared at the sky. I was overwhelmed…I immediately looked up to see what he saw—a beautiful blue sky, white cotton clouds, and the occasional bird flying by. I was struck with Gromek’s brave heart. After 40 some years of staring at a ceiling, he was calmly watching the infinite sky.”And about a month later…

“One night in January I was working at my computer around 9 pm. It was dark out. Suddenly I heard someone stomping on the big platform. This was a first. Who could it be? I opened the door and sat on the steps as my eyes adjusted to the dark. Yep, somebody was on the platform stomping and making noise. I realized it was Gromek, right about the time he let out the most amazing pant hoot. He pounded his feet a few more times, and then went back [inside.] Again, I looked up to see what Gromek could see. It was a black sky just filled with stars. It occurred to me Gromek hadn’t seen the stars for 40 years—not since the night before his mother was killed. I will never know what he was thinking. But I have a pretty good idea that Gromek was announcing himself to the night, to the stars…to the world.”

Gromek was a chimp’s chimp, mostly serious, although if you worked really hard at it, you could crack his stoic demeanor and get him to play and smile. But what was most important to him was his chimp family, and so it is fitting that he passed away among them. He died of sudden heart failure at the estimated age of 52. He is survived by his children Alora, Zeus, and Val, who also reside at STC. Gromek has other children still in research labs: Ariah, Axl, Bert, Donnie, Veenstra, and Wimpy. Gromek, we miss your oh-so-handsome face, calm demeanor, and kind spirit.