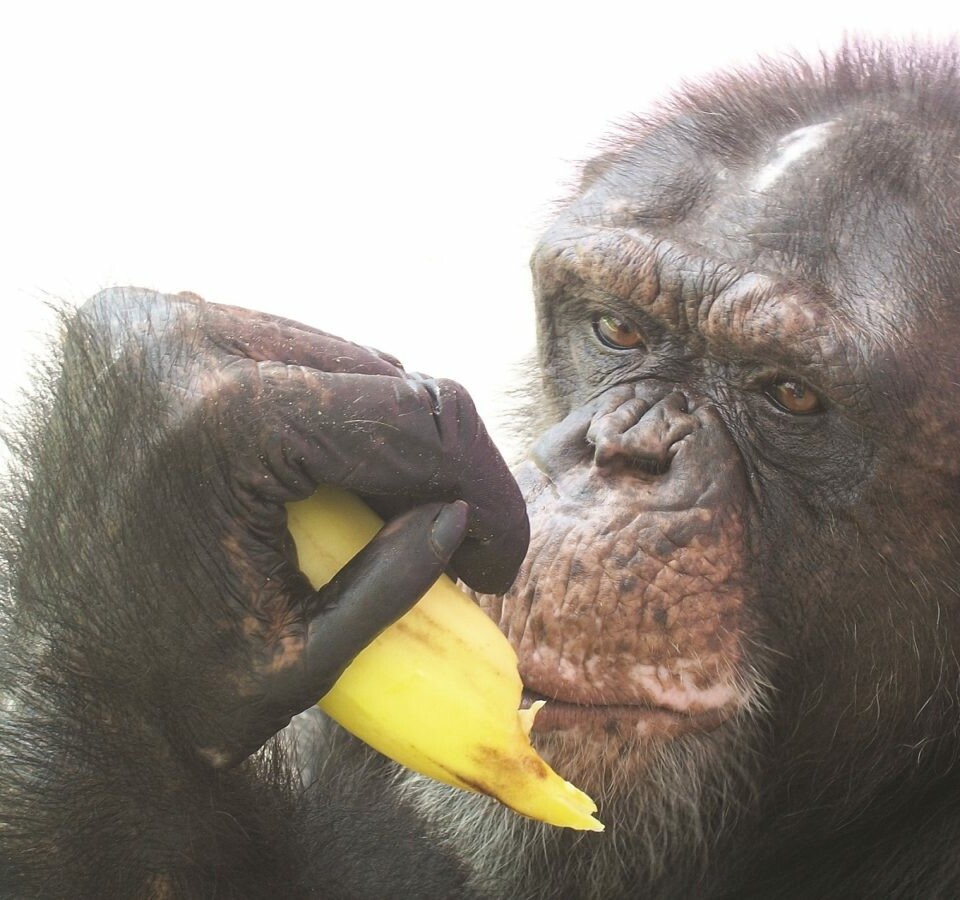 In loving memory of
Garrey

Garrey was a gentle giant beloved by everyone at the sanctuary, chimps and humans alike. He passed away at the age of 32 due to multiple herniated discs that severely impacted his mobility. Garrey was an incredibly sweet chimpanzee who was known for his kindness when meeting new chimpanzees, his calm nature, and his love for the comforts of sanctuary.

Garrey was among the 266 chimpanzees rescued by Save the Chimps from the Coulston Foundation, a now-defunct laboratory in New Mexico with extensive Animal Welfare Act violations. Despite his previous living conditions, we were immediately struck by Garrey’s happy and friendly personality. At the time, a chimpanzee in our care named Bobby  was suffering from psychological trauma, and we needed to place him within a calm family group with gentle-natured chimps. Garrey was an obvious choice for this group, and when the two met they became fast friends. Garrey never looked back and from then on loved meeting new chimps. When Bobby’s group was a fully-formed family, Garrey was playful with every group member and loved spending time on his island home. He became great friends with a chimpanzee named Walden as well, and the two loved to spend afternoons grooming each other.

In 2014, Garrey began to show signs of pain and weakness in his back and legs. We performed an MRI that showed seven collapsed discs, two of which were severely impinging on his spinal cord. Surgery was not an option due to the location of the discs and the approach required. With proper pain medication, we were able to keep him comfortable and mobile and with his family he loved so much. As his legs weakened and his mobility declined, we made the decision to move Garrey to our Special Needs area, where ground tunnels connect indoor areas to outdoor enclosures, allowing Garrey easier access to the outdoors, where he loved to be. Over time, several of Garrey’s group members had developed special needs of their own – some behavioral and some physical – and also required the advantages that the Special Needs Facility offered. He made the move to our Special Needs Facility with Geraldine, Scarlett, and Millie, who all adored him. Later, his best friend Walden joined them as well. While living with Bobby’s family, Walden had been hesitant to spend time on their large island for many years, but at the Special Needs Facility he was finally comfortable going outside and could enjoy the fresh air with Garrey. Living in the Special Needs Facility allowed the group to live in a more peaceful setting with special ramps, climbing platforms, and better visibility for observation.

Later, a chimpanzee named Tootie joined their small family group. Tootie is an incredibly playful and silly male chimpanzee and he loved convincing Garrey to play with him. Tootie usually preferred rambunctious games of chase, but he didn’t seem to mind Garrey’s limited mobility. He was happy to come to Garrey and tickle him into fits of laughter. We loved watching their friendship blossom and were so grateful that Tootie kept Garrey active and gave him the exercise he needed to stay healthy. Millie, a very reserved and quiet chimpanzee with a background of emotional trauma, loved Garrey dearly as well. While she wasn’t as rambunctious as Tootie, we would often see her choosing to stay close to Garrey and showing her affection in her own quiet ways. In fact, every chimpanzee who knew Garrey, both in Bobby’s family and in Special Needs, loved him and made sure he knew it. Because Garrey was so kind and gentle, he was often the perfect candidate to meet new chimpanzee arrivals to the sanctuary. When Tarzan, a male chimpanzee who spent several years alone before coming to Save the Chimps, arrived to the sanctuary, we decided to introduce him to Garrey before attempting to integrate him into a larger group to gauge how he would respond during introductions. The pair were absolutely thrilled to meet and spend days together filled with laughter and play. Garrey loved “play dates” such as these, but was always happy to return to his friends Walden, Tootie, Millie, Scarlett, and Geraldine.

Garrey and Walden remained best friends for the rest of Garrey’s life. We watched as Walden groomed Garrey more and more as his health declined. His disk disease had worsened over the years, and though he received the best medications available, more medical interventions were required to keep him pain-free and comfortable. As his disease worsened, he was having more difficulty moving, playing with his family, and caring for himself. His family was very attentive and took care of him the best they could, but we knew his quality of life was diminishing. Several physical exams and another MRI showed that most of his discs were now collapsed and were affecting his ability to defecate and urinate. We made the hardest choice that anyone can make in a sanctuary setting – to end suffering. When we received the report from his necropsy, we discovered that every one of his discs had disintegrated, reaffirming our concerns that his pain had become too severe to manage. Though we miss Garrey without measure, we know we made the right decision for our dear friend. All of the chimpanzees in our care make deep impressions on our hearts, always for different reasons based on who they are and how they respond to the world around them. We will always remember Garrey as strong, patient, kind, and dignified despite all the hardship he endured. We will forever miss and love you, sweet Garre-bear.