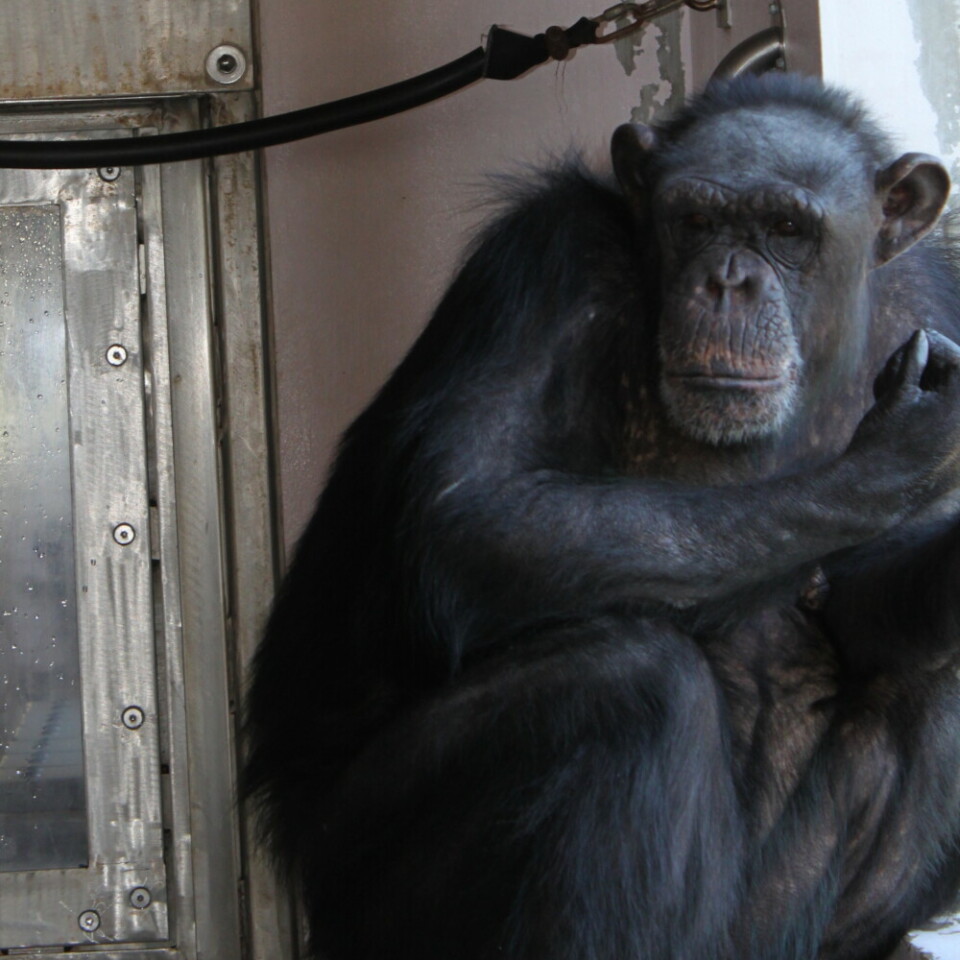 In loving memory of
Esmerelda

Esmerelda was born at the notorious Coulston Foundation in 1995 to her mother Ethyl and father Alvin. When she was one year old, little Essie was taken away from her mother and sent to the Center for Disease Control (CDC). We can only imagine what it must have felt like for this baby chimpanzee to be put in a steel box and shipped across the country. The CDC used her in hepatitis studies and she was repeatedly sedated for bloodwork, liver biopsies, and IV infusions. Esmerelda was luckier than most as she was housed with another chimpanzee during these times; most chimpanzees used in research were housed alone.

Esmerelda’s records show that she was frequently sick. She had an exploratory surgery due to what appeared to be a mass in her belly. When they opened up her abdomen, the veterinarian found several adhesions due to the number of liver biopsies she had. Adhesions cause abdominal organs to stick together resulting in significant pain. Esmerelda was only seven years old at the time.

When Esmerelda came back to New Mexico from the CDC, she returned to a very different place than the one she left in 1996. Save the Chimps had taken over the Coulston Foundation and transformed it so the chimpanzees would have a better life as they waited for the Florida sanctuary to be expanded. Family groups were being formed and the chimps were now being provided with daily enrichment, nutritious food, access to the outdoor areas, and most importantly, no possibility of ever being used in research again!

Esmerelda was very stressed at first. She wouldn’t eat and had a lot of diarrhea, which she also had for years in the research lab. As her life became less stressful, the diarrhea stopped and she began to relax. As she was introduced to other chimpanzees, she started forming social bonds and soon became a member of Bobby’s family. Esmerelda was always quiet and reserved, and remained a low-ranking member of her family. Like humans, every chimpanzee has their own personality and we accepted Esmerelda for who she was, though we were vigilant to monitor for signs of any recurrence of stress.

Esmerelda surprised us when we gave her an opportunity to meet new chimpanzees this past year. Terry, Tarzan, Indie, and Cayenne were moved from the Special Needs Facility to a small group within Bobby’s family. Because Esmerelda showed so much interest in these newcomers, she was one of the first ones we introduced to them. Esmerelda bonded quickly with these new chimps and liked to spend the majority of her day with her new friends.

In December, Esmerelda had a physical exam when we sedated her to remove a bad tooth. Her exam and bloodwork were normal at that time, but two months later everything changed. Essie wasn’t feeling very good for a day or two and sadly, this time, her bloodwork was abnormal. Sweet Esmerelda had silently slipped into severe renal failure without showing any symptoms. There are many different reasons for the kidneys to stop working: toxins, viral or bacterial infections, severe dehydration, autoimmune diseases, and even Hepatitis C. When the kidneys stop working, the whole body is affected. The kidneys are responsible for removing waste from the body, balancing electrolytes, regulating blood pressure, and producing a hormone that stimulates the bone marrow to produce red blood cells.

We treated Esmerelda for one week with every possible treatment except for dialysis, which is impossible to do on a chimpanzee. She was an excellent patient and would gently take treats we offered her then would gently put them down, almost as though she didn’t want to disappoint us. Sadly, she did not respond to any treatment. Though we were very upset, our final act of love was to euthanize beautiful Esmerelda so she wouldn’t suffer. It was unbearable to say goodbye to such a kind and wonderful spirit, but she deserved to go with dignity. It is impossible to say what caused Essie’s kidneys to suddenly stop working; all the tests we ran came back negative, including her autopsy that reported the damaged kidneys but no obvious cause. She was positive for Hepatitis at the time of her death, though the specialists were not able to determine if this was the cause of her kidney failure.

We mourn the loss of every chimpanzee friend, but we are saddest when they die so young. Esmerelda’s sickness was quick and unexpected, and we miss her every day. We think of her often, and there is some relief in knowing that she had many happy years at Save the Chimps. She was given the opportunity to make deep and lasting friendships, roam her island home, and feel the warm sun on her face.