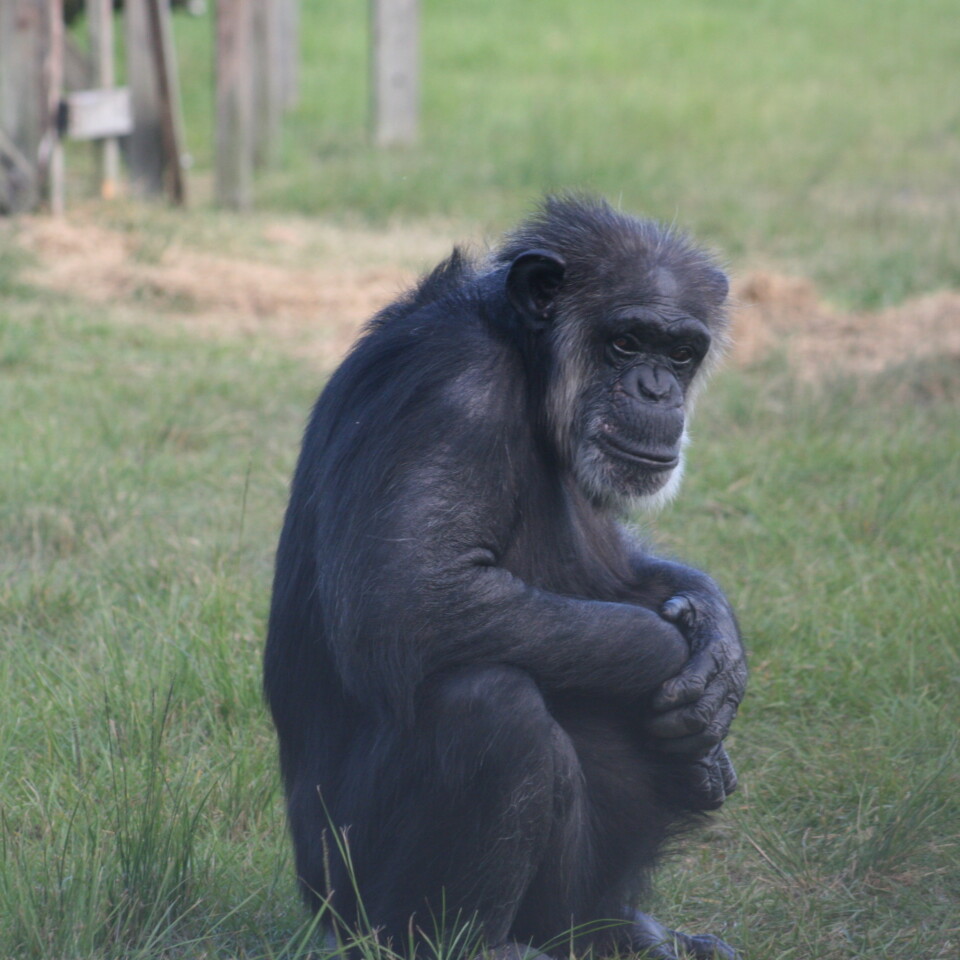 Hello, my name is
Emily the 1st

I was born in the wild, my exact date of birth is unknown but I am estimated to have been born in 1964. Chimpanzee mothers are very protective of their offspring, so the only way to capture a baby in the wild would be to kill the mother and any other group members who stood in the way. I was sold to a lab and forced into a life very different from the one I had known. I arrived at The Coulston Foundation, a biomedical research laboratory, in May 1968 from the International Animal Exchange in Detroit, Michigan. I was used for an eye refraction study and a “classified drug evaluation.” I entered the breeding program at the very young age of approximately seven years old and gave birth to my first daughter two years later. After multiple stillbirths, I gave birth to my second baby, Dwight. During the time we were allowed to stay together, I held him close, nursed and grooming him. I was described as playing with his hands and feet in a loving way. Despite our bond, he was sent to the nursery to be raised by human caregivers at five days old. Three years later I gave birth to another son, Ragan, who stayed with me for only a day.

I remained at Coulston until Save the Chimps (STC) rescued me in 2001. I was a member of the Air Force Group, who were the first chimpanzees rescued by STC. Although I was never allowed to raise any of my own babies, later in life I had the opportunity to play the role of adoptive grandmother to Angie, JB, and Jude, babies born at STC due to a failed vasectomy. Our relationship has given me the chance to experience the joy of raising children that I was deprived of during my years in the lab. Even though Angie has grown up, I am still very protective of her. We spend many hours together grooming and enjoying each other’s company. I show her the love and patience I tried to bestow on my own children and Angie’s life has been enriched as a result.

The laboratory caregivers noted I liked to “bathe” myself which is something I still do today. I will get a big mouth full of water and spit it all over my face like a fountain while wiping my face with my hands. Often times when I do this I lie on my back and kick my legs in the air while making a very distinct vocalization. I treasure the time I get to spend with my family on our 3-acre island in Florida.

It’s a beautiful experience to watch this amazing lady, who has overcome so much in her life, live out her retirement on her island in the sun.  She has a dignity and grace surrounding her that commands respect.  The strong bond she has with her family is a beautiful thing to see and is an honor and a privilege to witness.