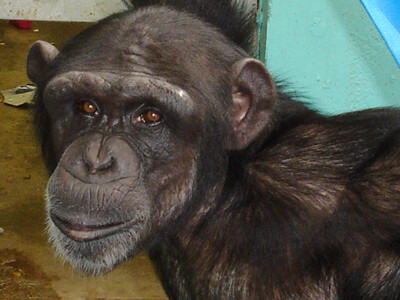 Hello, my name is
Deanna

Deanna was a sweet and special soul who was born to her mother Alison and her father Dave at The Coulston Foundation in New Mexico on March 29, 1994. Surprisingly, Alison was allowed to stay with Deanna after birth alongside another chimp mother, Montessa, and her son, Seve.

However, two days before Deanna’s first birthday, her mother and Montessa were anesthetized and awoke to find their children had been taken from them. Apparently, this was meant to “wane” Deanna from her mother before being shipped off to another testing center. This “waning” period consisted of Deanna being anesthetized six times for blood draws and a liver biopsy.

On December 16, 1995, Deanna was sent off across the country to a lab called Bioqual in Maryland, where she lived alone and was used as a biomedical research subject. In 2002, Deanna was sent to the MD Anderson Cancer Research Center in Texas, still “owned” by The Coulston Foundation. When Save the Chimps took over The Coulston Foundation (The Coulston Foundation closed due to multiple welfare violations and a lack of funding), she was still living at MD Anderson, but eventually, we were able to bring Deanna home. She returned to New Mexico and began the process of socialization into a chimpanzee family.

Fortunately, we were able to reunite Deanna with Seve and introduce her to Seve’s family. Although it is unlikely that they remembered each other from their short-lived upbringing together, they still managed to form a special bond once they were reunited. Seve suffered from extreme PTSD that sometimes led him to scream and self-mutilate at the time, but Deanna would comfort and reassure Seve during his troubled moments while the other chimps would simply avoid him.

Deanna had a playful and light spirit. She loved playing with paper and cardboard and was known to make skirts out of paper bags. She also enjoyed the softness and comfort of blankets, carrying them with her wherever she went and draping them over her bottom.

On October 17, 2011, Deanna passed away as a result of heart and kidney failure. Although Deanna was only 17 years old, we are at peace knowing that she was given a better life in her final days. She got to enjoy the company of other chimps in her family, like Anna and Hunter, and she lifted everyone’s spirits no matter where she went. If you would like to help provide better lives for chimps like Deanna, please consider donating in Deanna’s memory. Through July 30th, 2021 all donations are matched giving your gift twice the impact.