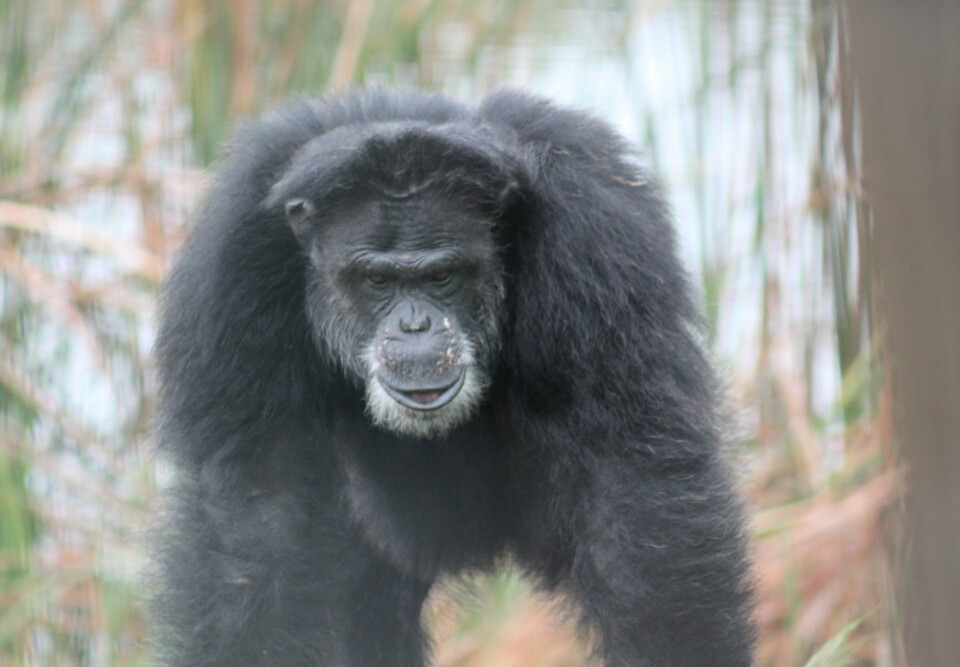 In loving memory of
David

“Forgiveness is an attribute of the Strong.”  Mahatma Gandhi
David, one of the most beloved chimpanzee at Save the Chimps, passed away from heart failure after many years of treatment. He was an incredible being and will be sorely missed by his chimp and human families. We generally write our tributes describing who the chimpanzee has become once they are given the opportunity to live a more fulfilling life at Save the Chimps. But for dear David, we wanted to show the true meaning of forgiveness by sharing his life story with you.

David was born in Africa. If he had been allowed to stayed there, his mother would have lovingly cared for and fiercely protected her young son. David would have nursed for 5 years. He would have ridden on his mom’s back while foraging for food, for, teaching him what to eat and what to avoid. These early childhood experiences would have shaped his social skills, personality, survival ability, and character. David would have spent his whole life in his natal territory surrounded by a large family and eventually fathered children himself.

But David never got to experience that life. Instead, he was snatched from the forests of Africa and brought to the United States for biomedical research. Although we have no information of his early years, David ended up at a laboratory called LEMSIP located in upstate New York. Here, the chimps were singly housed in cages suspended from the walls. The fetid feces and urine that piled beneath the cages caused a horrible, caustic odor. There was no outside access, nesting material, fresh food or enrichment. For over 10 years, David languished in this small space. Weekly he was sedated with ketamine, which stings when given in the muscle. He would probably sit in anticipation of the pain and distress because his food would be withheld while the other chimps ate around him. The records reflect that for ten years he was injected weekly, had multiple substances introduced into his body and was subjected to constant blood work and liver biopsies.

When LEMSIP finally closed, David and other chimps were sold to the Coulston Foundation in New Mexico, a laboratory with one of the worst animal welfare violations records in history. He spent 4 years living in isolation in building 300, a dark, dank structure referred to as “the dungeon” by Dr. Noon. The chimps were housed alone in cement cells with no outside light, no ability to see their neighbors and no stimulation.  And in one of those enclosures sat dear, sweet David.

David was kind, handsome and lovable, though never subservient, from the moment we met him. He garnered respect from every chimp and caregiver who was lucky enough to know him.  He had piercing brown eyes that stared directly at you, communicating his intelligence and exposing his soul and forced you to open yours. He was a chimp among chimps; kind, smart and dignified. He formed a strong bond with everyone in his family, but particularly Pele, who remained close by for the rest of his life. Although he was diagnosed with heart disease in 2006, he lived an active and enriching life.  David’s family made the move to Florida in May, 2009 and soon after, the doors to the island and his new life opened. David  remained a gentleman until the day he died.
Now that is forgiveness………
Join us in remembering him.