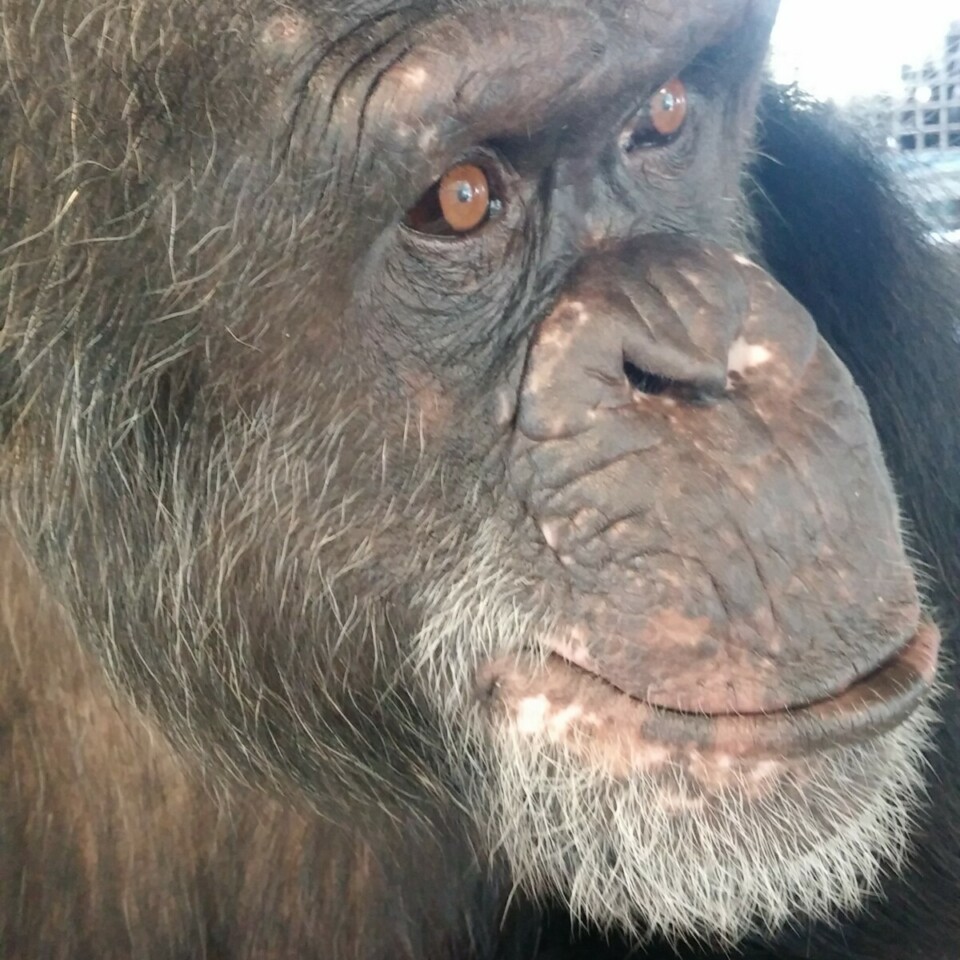 In loving memory of
Sir Connor

Sir Connor, a gentleman and a gentle man.
Connor was a chimpanzee who touched everyone’s heart. He was smart, handsome, and kind just like his parents, Stella and Marty. Connor was born on January 11, 1989 at the Coulston Foundation, a notorious laboratory in New Mexico with extensive Animal Welfare Act violations. He was taken from his mother, Stella, only 24 hours after birth and sent to the nursery.  While many chimpanzees living at the Coulston Foundation lived in isolation, it appears that Connor always had the company of other chimps and was never used in biomedical research, which may have contributed to his easygoing personality. His record from the lab notes that he was very social and got along well with his peers and the lab workers.

Save the Chimps rescued Connor and all the chimps living at the Coulston Foundation in 2002. Family groups were formed, and Connor became the leader of Ron’s family. He became known as Sir Connor when a younger male, also named Connor, moved in with his brother Kramer in 2010. It was a natural fit for such an honorable and distinguished guy. He was also known as The Gentle Giant. He was patient, kind, and accepting of all, whether it was a frightened youngster like Dylan or Marlon, or an older lady who wasn’t sure what to expect from this strapping, strong young male. Easily ascending to the alpha male status, his presence resolved most issues without violence.  If he had one flaw, it would be that he was a pacifist. He never fought, even to defend himself. Occasionally he would get hurt and this deeply distressed him; it was quite obvious his feelings were hurt, too.

Sir Connor’s dad, Marty, was one of the original 21 Air Force chimpanzees saved by Dr. Noon, and was also one of her favorites. Soon after rescuing these first 21 chimpanzees, she was handed the keys to the entire Coulston Foundation lab, and the largest rescue effort on behalf of captive chimpanzees in history began. Once they arrived to our Florida sanctuary, Connor, Marty, and others enjoyed the freedom to run on their island surrounded by chimpanzee friends, and being cared for by loving caregivers. We wish Connor could have stayed with us for another 25 years but it was not meant to be. Sadly, like so many male chimpanzees in captivity, his healthy heart muscle began degenerating and became thickened with scar tissue. Handsome Sir Connor passed away suddenly from a fatal arrhythmia, surrounded by his family. Nadia, one of his oldest friends, stood over his body protecting him and did not leave him for over an hour. The Sanctuary became quiet as it often does after a chimp passes, and we all mourned for the beautiful chimp who had left us.

Dylan, one of the teenage boys in Ron’s family, worshiped the ground Sir Connor walked on and followed him everywhere. Dylan watched the way Sir Connor behaved, gently breaking up tension between agitated chimps by sitting between them, or protecting the elderly ladies when the males got rambunctious. If Gail was being picked on out on the island, Sir Connor would go out, put his arm around her, and protectively walk her back into their indoor housing. Shortly after Sir Connor’s passing, one of the caregivers saw the impact Connor had when he witnessed Dylan protecting Gail in much the same way. Connor will live on not only in our hearts, but also in the way he influenced little Dylan and others. Perhaps Dylan will one day walk in his hero’s footsteps and lead the family that Connor had to leave so soon.

Rest in peace, Sir Connor. You will always be in our hearts.