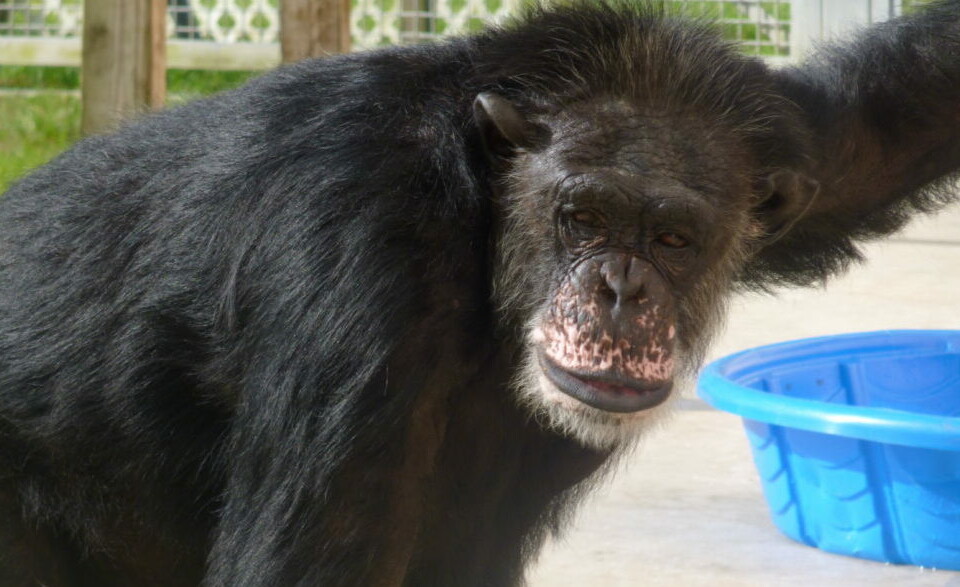 Hello, my name is
Cayenne

I was born December 27, 1982. My parents are unknown, but I was believed to have been born at the University of Texas MD Anderson Cancer Research Center in Bastrop, TX. When I was just over a year old, I was sent to the Laboratory for Experimental Medicine and Surgery in Primates (LEMSIP) in New York State. I remained there for the next 12 years. While there, I lived alone in a suspended 5’x5’x7’ steel cage and never saw the outdoors. I endured approximately 320 “knockdowns” in which I was darted with ketamine in order to anesthetize me for anything from biomedical research protocols to cage changes. I was also subjected to 40 liver biopsies. In 1996, LEMSIP closed and I was sent to The Coulston Foundation (TCF), a lab in Alamogordo, NM. At TCF I was used in two biomedical research protocols in which I continued to endure frequent “knockdowns.” However, unlike at LEMSIP, I was able to live with other chimps and go into outdoor cages at TCF. I became best friends with Indie, who I lived with until her passing in 2021.

I was rescued by Save the Chimps in 2002, where I will never be used as a biomedical research subject again. I am a warm-hearted chimp with a strong stubborn streak. It took me decades to become comfortable with the wide open spaces of the island. Previously, I would only venture out to the concrete patio between the building and the island, soaking up the sun there and then returning inside. I will now venture out to the island and am used to the feeling of grass between my toes, a sight that brings joy to the faces of the staff.