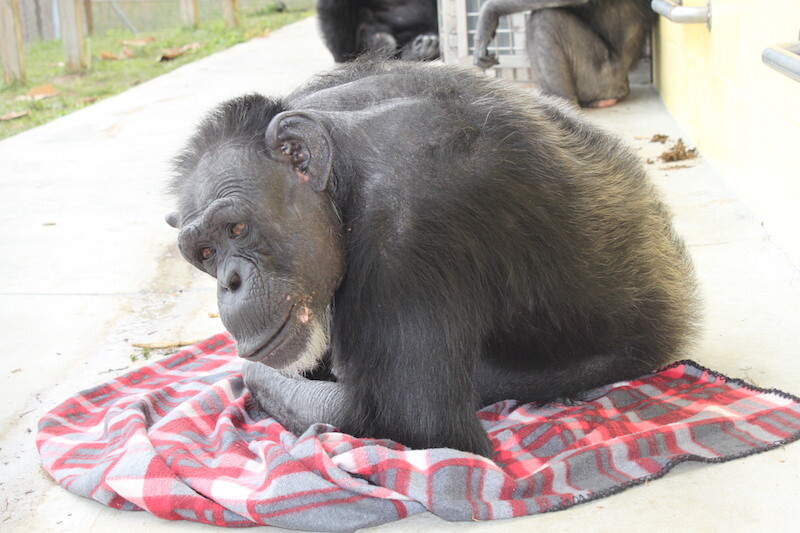 In loving memory of
Casey

We are deeply saddened to announce the passing of Casey, one of our oldest and most beloved residents at Save the Chimps. A member of Tanya’s group, Casey was highly respected by every chimpanzee in his family. Casey loved being outside, and when he wasn’t playing or grooming with other chimps, he could usually be found relaxing with a blanket in his favorite spot – or as we called it, “Casey’s spot” – a quiet, grassy area surrounded by trees at the water’s edge of his island habitat.

Casey was a remarkable chimpanzee who made the most of sanctuary life. When Casey arrived to the sanctuary, he was initially incorporated into Doug’s family, where he became alpha of the group. He was an excellent mediator during disputes between the chimpanzees, though admittedly he seemed to enjoy being a part of the drama at times! He became highly protective of the “old lady crew” of the group – Henrietta, Rebecca, and especially his dear friend Dana. Casey became close friends with Sonny and Pepsi, who became quite a trio to be reckoned with. Eventually, Casey was moved to Tanya’s family with some of his closest friends, including Rebecca and Sonny. Casey and Sonny remained thick as thieves throughout Casey’s life, and were often seen eating together and relaxing out on their island.

Casey was full of adorable quirks and unique features. He had a small build, but was very muscular, leading to the affectionate nickname “Mr. Universe.” New caregivers quickly became familiar with rhythmic “Casey sounds” they would hear echoing throughout the indoor area. Casey would find a toy or cardboard box and happily tap it until someone joined him to play. Caregivers came to love these sounds, as they indicated Casey was nearby and happy. Sometimes he was so eager to play, he would refuse his food during mealtimes until he got a proper play session out of his caregiver first. Once he was satisfied that they had played enough, he would gently accept his food.

One of Casey’s favorite activities was painting, which is a form of enrichment we offer to the chimpanzees. You could see the intention he put into each brushstroke as he swirled the paint around on the canvas. He also loved blankets, which he would carry by the armful until he found the perfect spot to nest. Oftentimes, Casey would take his bundle of blankets all the way to his spot under the large oak tree on his island. Towards the end of his life, it became more difficult for Casey to make the trek all the way out to his favorite tree, but he still always found a sunny spot to relax in on the island. His caregiver Brooke remembers, “I always loved watching the sun hit his face while he was lounging on the island. He really made the most of the freedom he didn’t have earlier in his life.”

Though Casey’s date of birth was estimated, he was more than 52 years old at the end of his life and believed to be our oldest male. His health began to decline as a result of old age, particularly due to cardiac disease. Two young females, Ellie Mae and Salina, became particularly close to Casey as his health began to decline. While they usually spend their time with younger males, they took excellent care of Casey at the end of his life. They would often wait for him to come inside before they would eat their own meals, especially Salina. She would look toward Casey’s tree on the island and quietly wait for him to approach. After Casey passed, Salina began to cry out and embraced Vicky, who was sitting next to her. Salina then found a stuffed animal and pushed it toward him. She seemed to feel adamant that Casey should have this token of her affection. We kept it with him until he was cremated for his ashes to be spread on his island home.

Casey’s caregiver, Skye, shared a Stephen King quote to summarize our feelings for Casey:
“The body was far smaller than the heart it had held.”

Casey may have been of small stature, but he filled every moment to the brim with happiness and warmth. To know Casey was to know love. We were honored to know this love, and will always carry his memory with us.

Rest in peace, Casey. We will miss you always.
Join us in remembering him.