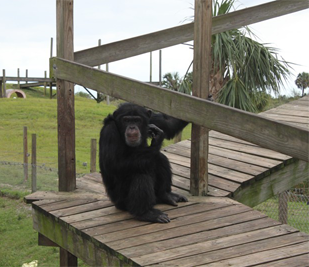 In loving memory of
Bradley

Bradley was born March 17, 1994 at The Coulston Foundation in Alamogordo, NM to his mother Stella and his father Lou. He was separated from his mother right away and sent to live in the laboratory nursery. He was only one year old when he was sent to a research laboratory in Maryland, and a page in his file indicates that he lived alone, but contain no other records of his years there. To our knowledge he remained there until early 2002 when he was sent to another research laboratory in Texas. After Save the Chimps took over The Coulston Foundation, Bradley was returned to his place of birth in New Mexico. There he was introduced to other chimpanzees, which Bradley found a bit daunting at first. He was a very sweet and gentle fellow, but somewhat shy and reserved around other chimps. He often cuddled a bundle of soft blankets for comfort. He eventually became best friends with Roady, another male chimp his age who, like Bradley, had lived much of his life in isolation. Together they became members of Tapioca’s Family.

Tapioca’s Family was the last group to migrate to Florida, where a world like they had never seen awaited them. Bradley was a bit tentative about exploring his new home when he first arrived, but eventually ventured out to the grassy hills. To our great sorrow, Bradley passed away suddenly just months after his arrival in Florida. We deeply miss our handsome and kind friend with all of our hearts.