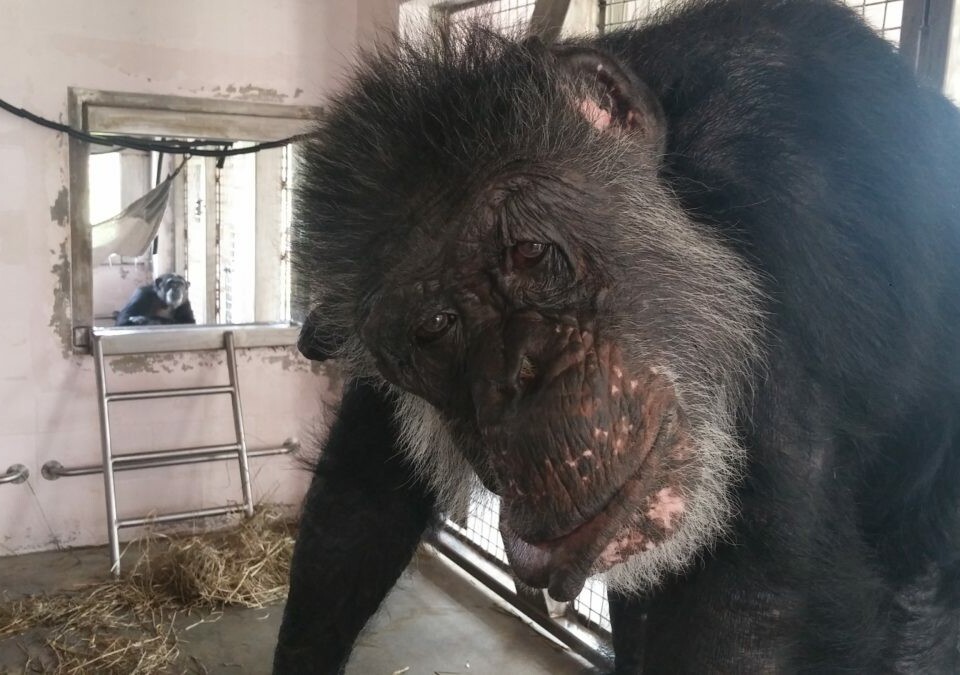 Hello, my name is
Boy

I, like so many biomedical research veterans, have somewhat of a mysterious past. The location of my birth and my parents are unknown, but it is possible that I was born in Africa in the late 1960s, and captured as an infant to be sent into research or possibly the pet trade. My whereabouts for the first ten years or so of my life are not recorded. I spent some years at a research facility in Texas, but when I arrived at that laboratory is unknown. In 1982, I was sent to a now-defunct laboratory in New York State called LEMSIP, the Laboratory for Experimental Medicine and Surgery in Primates. There I spent most of my life alone in a 5’ x 5’ x 7’ cage and was used in at least one biomedical research study. When LEMSIP closed in the 1990’s, dozens of LEMSIP chimps, including myself, were sent to the Coulston Foundation (TCF), a laboratory in Alamogordo, NM.

My records are incomplete, but it appears that I was used as a breeder, and fathered at least two children. In 2002, I was rescued by Save the Chimps. I was found living alone in Building 300, dubbed “The Dungeon” due to its dark and miserable conditions. I showed signs of depression, often lying on my perch, showing little interest in my surroundings. This came as no surprise, as my records indicate I had spent the bulk of my life alone, and anesthetized at least 175 times over 20 years and endured nearly 20 liver biopsies.

The staff of Save the Chimps quickly removed me from isolation and introduced me to other chimps. I perked up immediately, becoming much more active and energetic, and delighting in the company of my new chimpanzee friends. I prefer the company of ladies to that of the males of my group. In January of 2010 my new chimp family and I took the journey of a lifetime to our new island home in Florida. While some of my family members were nervous, I laid on my back with feet in air sensing whatever was happening was well worth the effort. When we arrived in Florida we learned that we had a large island to explore. I love relaxing in the sun and I like to pick the cattails along the waterway to eat. My favorite activity is grooming, as long as I can find someone to sit still long enough to endure one of my marathon grooming sessions!

Get to Know Boy