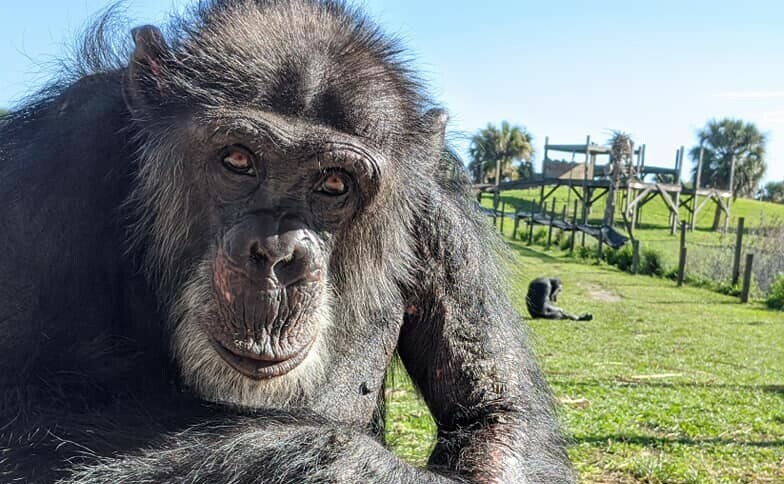 Hello, my name is
Bobby

I was born at the Coulston Foundation laboratory on January 31, 1983. I was taken away from my mother, Lola, shortly after birth and sent to the nursery to be raised by humans. When I was a year old I was taken from the nursery and began my life as a biomedical research subject. I was used for at least eight studies. I was anesthetized over 250 times and had numerous liver and muscle biopsies. I was traumatized by my life of fear and pain. Instead of taking my anger out on humans, I took it out on myself – biting my own arm and often causing serious wounds.

Save the Chimps rescued me in September 2002 when it took custody of the chimpanzees at the Coulston Foundation. I was found living alone in a small and barren cage in a building dubbed “the Dungeon” because of its similar qualities. I was depressed and emaciated and my arm bore the scars of self-mutilation. I slept sitting up and facing the wall of my cage.

I was one of Save the Chimps’ most immediate concerns. I was moved out of the Dungeon and introduced to a young male named Ragan, who became my first friend. Since then I have made many new friends, including everyone at Save the Chimps who takes care of me. Thanks to the friendship of my chimpanzee family, as well as the dedication of my veterinarians and caregivers, I gradually stopped injuring my arm. I moved to Florida in February of 2010, and have been enjoying island life ever since!

In fact, I have become an essential group member. I help new chimps transition into the family and am patient and kind. I am a natural at keeping the peace and once I step in, all of the chimps respond with respect. Part of what earns chimps like me this kind of respect is how we treat others on a daily basis. I am friendly to everyone in my group and every day can be seen playing, grooming, or relaxing with my family.