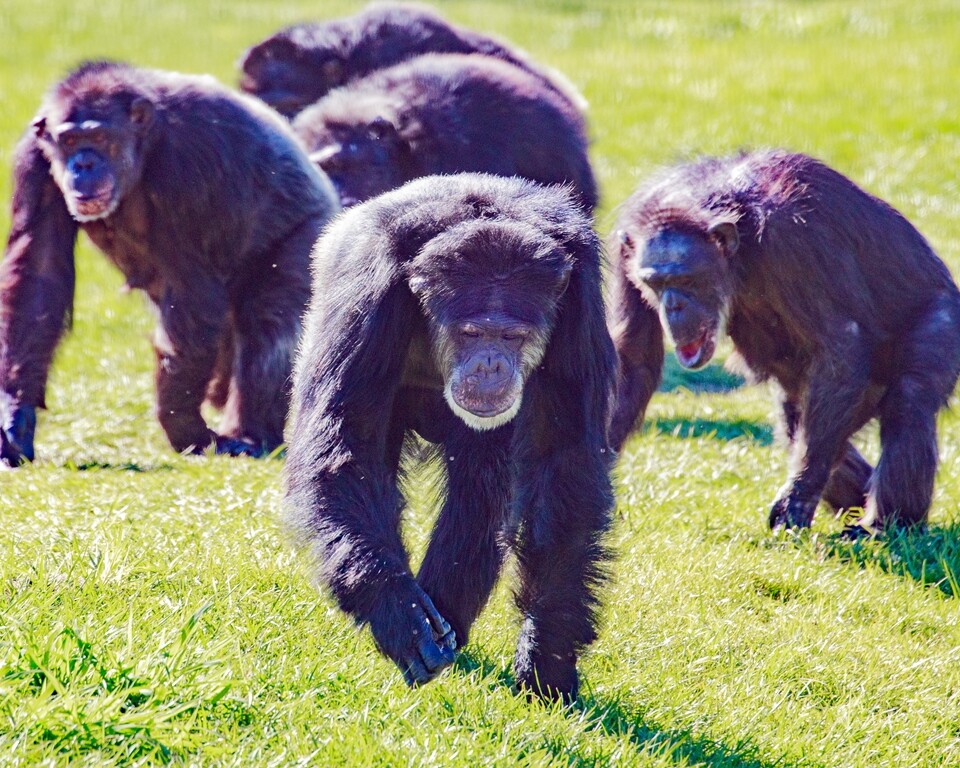 In loving memory of
Arnulfo

It is with great sadness that we announce the passing of Arnulfo, a beloved resident of Save the Chimps. Arnulfo was born January 31, 1991 at Holloman Air Force Base to his parents Arlene and Carlos. Arlene was an excellent mother and attentive to her son’s needs. His vocalizations were met with grooming sessions and cuddles from Arlene. In fact, she held him so close that the laboratory caregivers were unable to determine if he was a boy or a girl for the first couple days after he was born! Arnulfo was allowed to stay under the protective watch of Arlene for just over a year. At this time mother and son were separated, and Arnulfo was introduced to a young female chimp, Francis. Possibly due to their young age, both toddlers struggled with adjusting to this new situation and to each other. In the wild young chimps this age would still be with their mothers. She would spend the next few years teaching her child the necessary skills to be part of the chimpanzee world.  Without the constant and soothing presence of their mothers, young chimps forced into this situation seek solace anyway they can. Francis tried to console herself from the loss of her mother by “nursing” on Arnulfo’s ears, leaving them raw and irritated.

While still a toddler, Arnulfo was transferred to Bioqual, a laboratory in Maryland, where he was placed on multiple studies over the next few years. The first research protocol required him to be inoculated through his nose and into his trachea. A few months later a stomach tube was used to give him the next substance being tested. This was followed by multiple liver biopsies over the next three years. Unfortunately, the researchers struggled with accurately reaching Arnulfo’s liver and over the course of a year they hit his gall bladder during four out of thirteen liver biopsies performed. An ultrasound was done to determine the precise spot necessary to insert the needle to reach his liver. When this didn’t help, an experienced radiologist who routinely performed liver biopsies on monkeys was consulted for guidance on how to perform the liver biopsies on Arnulfo without hitting his gall bladder so he could continue to be used in the study. While he was going through this, he was noted to show signs of depression and anorexia. Blood work did not reveal any obvious medical reasons for this downward spiral. During this time he was dressed in a jacket, most likely to prevent him from picking at his wound from the liver biopsies. When it was discovered the jacket was too tight and causing irritation to his hips, it was hypothesized the pain from the ill-fitting garment might have contributed to his depression and lack of appetite. Although the medical staff continued to observe Arnulfo and perform diagnostic tests on him, a concrete answer was never determined as to the cause of his episodes of depression. Despite continuing to show signs of distress, he remained on the study and received nineteen liver biopsies the next year. At five years old he returned to the Coulston Foundation in New Mexico and the liver biopsies continued. He was subjected to ten more in the next year.

One approach The Coulston Foundation used to prevent pregnancy was to separate groups by sex as the young chimps approached puberty and beyond. In this way the staff could control which females would participate in breeding and which males would father their babies. Arnulfo joined a group of boys his age when he was seven. He must have been happy to meet these boys because he played and laughed during the introductions. A behavioral assessment done on Arnulfo while living in the lab described him as a “happy, mellow chimp.” It was noted he was friendly with humans and other chimps.

Arnulfo’s life changed in 2002 when he was among the 266 chimpanzees rescued by Save the Chimps from the Coulston Foundation. As an adult he seemed to become a bit more serious and reserved. Beginning in his early days at Save the Chimps he played a peacemaking role in Rufus’ family when needed. Some days this would involve reconciling disputes between members of the group and other days he would be busy keeping the young boys of the group in line. He was kind to his Save the Chimps caregivers but he did not necessarily seek out their attention. Then, he started showing a softer, sillier side with both chimps and humans. One of the chimps he started playing with is Gerro, another of Carlos’ sons and the alpha of the group. It was always nice to see them greet each other with an enthusiastic hug. Watching these two brothers laugh and play together gave us a glimpse into what they might have been like if they had been allowed to be raised together. This new friendship may be one of the reasons we saw Arnulfo step into a peacemaking role. With his brilliance and compassion, he excelled at helping members of his family resolve their differences.

Arnulfo had a strong bond with a powerful female in his family group, Frieda.  When the relationship first started he insisted she stay by his side and would block her way if she tried to leave him. We have definitely seen Frieda hold her own in all sorts of situations over the years so if she really wanted to leave she could have moved him aside and gone about her business. Instead, their relationship seemed to be mutually beneficial. They both love veggies, and Arnulfo “shared” his with Frieda whether really wanted to or not! After he handed over his food to her, he patiently looks up at his caregivers, waiting for them to replace the item he offered up to Frieda because he knew we were always waiting with another.

Arnulfo is an example of resilience, overcoming his tragic past and going on to shine in sanctuary life. He started his day just like every other, enjoying the morning with his family by his side. He ate his breakfast and was spending time with Frieda when he suddenly collapsed. Care staff was at the building so our veterinary team was notified immediately, but even with this immediate care, were unable to resuscitate. We take a bit of comfort knowing that Arnulfo passed suddenly with his family by his side and with minimal pain.

Rest in peace, dear Arnulfo, we love and miss you.