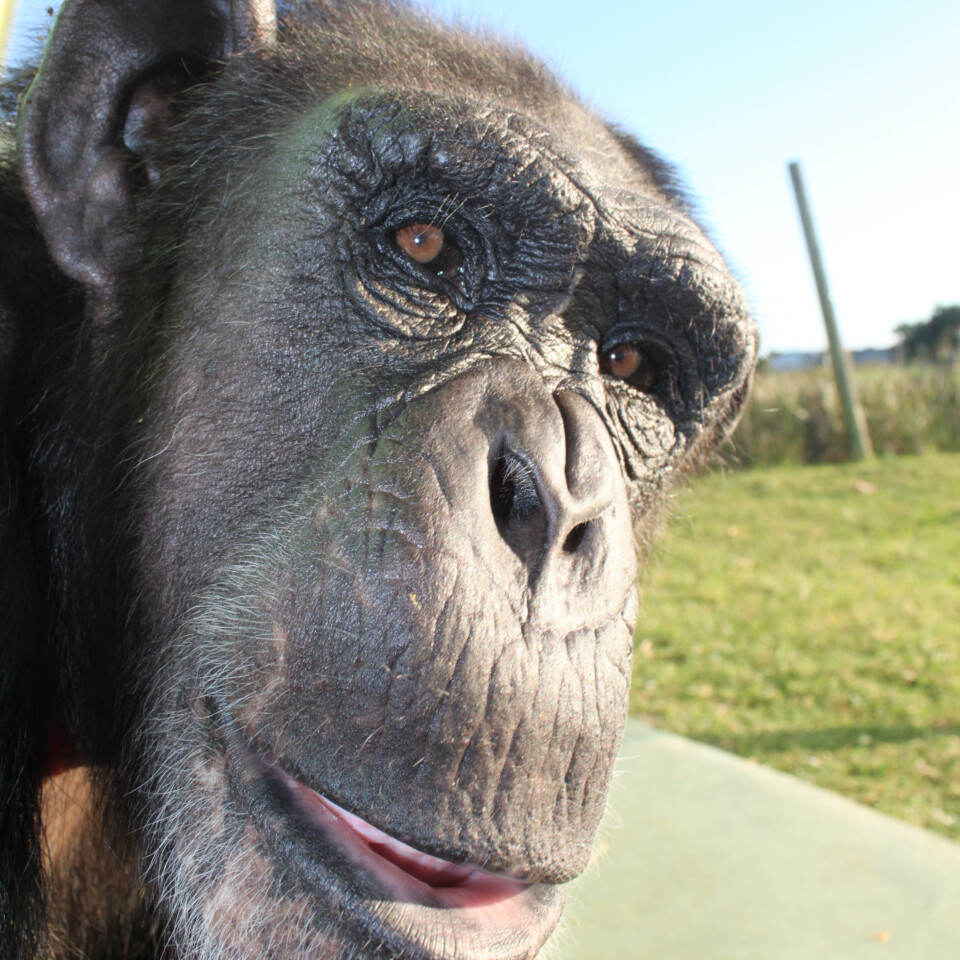 Hello, my name is
Anna

Anna was born on February 13th, 1993 at the Coulston Foundation, a now-closed research laboratory in New Mexico. After a year, she was handed over to the Centers for Disease Control and Prevention (CDC) for hepatitis research.

While at the CDC, Anna was infected with Hepatitis C, given immunoglobulins, and then sedated bi-weekly for blood tests for years.

These memories had a lasting impact on Anna, as she was always reserved and timid since her arrival at Save the Chimps. Anna was placed in Seve’s family, where she made a lifelong bond with Seve, a bond that we suspect may have been fortified by the fact that they both suffered from PTSD.

Unfortunately, as time passed, Anna’s kidneys began to fail her due to an unknown cause. This did not stop Anna from pushing through and greeting every chimpanzee and person with a loud hoot and a warm smile. Her caregivers often brought her food up to her as to not disturb her from her calming nest, and when she did not feel like eating, she would patiently take the special food offered to her and place it in her nest. Her kind and gracious nature never faltered, even in her last days.

Skye, one of her devoted human caregivers, described Anna this way.

“It is impossible to put into words how special Anna was. She was more timid than the other chimpanzees in her family, but she had a loving demeanor that set her apart. She was gentle and kind to chimps and humans alike. True to her genial nature, Anna preferred not to involve herself in the rambunctious antics or politics of her family. She instead liked to watch from a cozy nest in one of the building’s overhead tunnels. While these nests often contained large blankets and comforters, Anna would supplement her nests with toys, bottles, and even some unique materials. One year after a Chimpmas party, Anna dragged an entire Christmas tree into her tunnel for a nest! She would also love to bring pumpkins given out during Chimpoween into her overhead nest. I was always amazed just what she had hidden amongst the blankets when I cleaned her tunnels”.

In her final days, Anna was accompanied by Seve, where they spent their time holding hands and grooming each other, a sign of great affection and closeness among chimpanzees. Anna was helped to pass peacefully once her suffering was too strong and unbearable in 2017, and as devastated as we still are about losing such a bright and gentle soul, we are glad we were able to provide her with love and comfort in her last years of life.

To help other chimpanzees like Anna live out better lives free of pain and cruelty, please donate to our cause.  Donate In Anna Banana’s Memory.