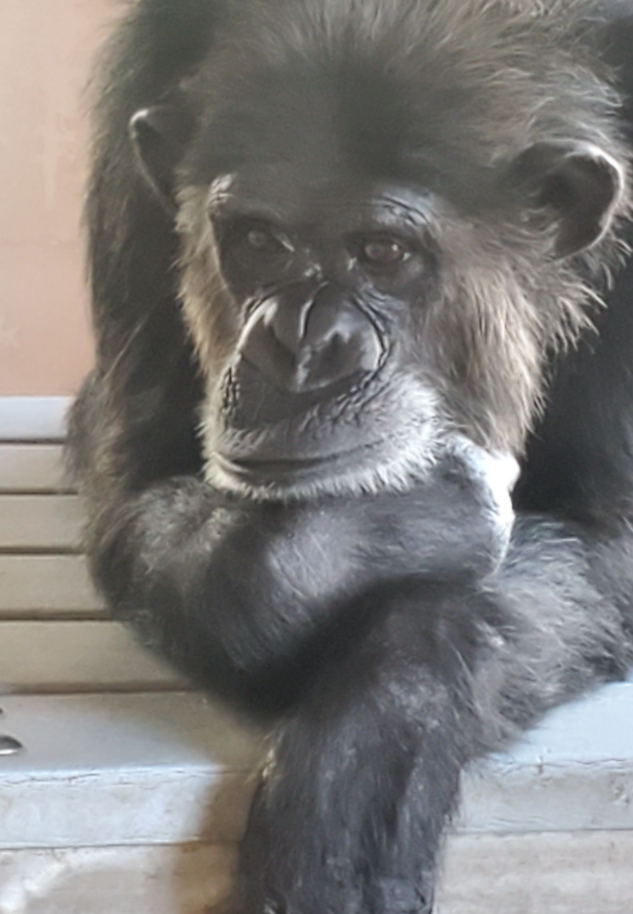 Hello, my name is
Angelica

I was born to my parents, Phyllis and Cliff, on August 26, 1986, at the Coulston Foundation, a biomedical laboratory. I was weaned from Phyllis when I was approximately three years old and placed in a group of female chimpanzees my age. While in the lab, I had quarterly blood draws and routine physicals. Thankfully I was not used in any studies. Instead, at eight years old, I was introduced to a “breeding group.” While in the breeding program, I had four pregnancies. The first two were miscarriages, and following that, I had two children, Janice and Cody.

Although I am kind to my human caregivers, I am more interactive with other chimpanzees. I have a goofy side, which I show by “break-dancing” on large pieces of cardboard. When done break dancing, I will lounge on the cardboard, taking a nap. I am well known for my dance skills, and the kitchen staff saves large boxes just for me. I let my inner child shine by twirling from the large toys hanging around my home. I wind up the toys by twisting them as far as they will go and then hold on while I spin and spin as the toy unwinds. I love being outside, exploring, or simply relaxing in the beautiful Florida weather in the company of my friends. After all, that’s what Save the Chimps is all about.