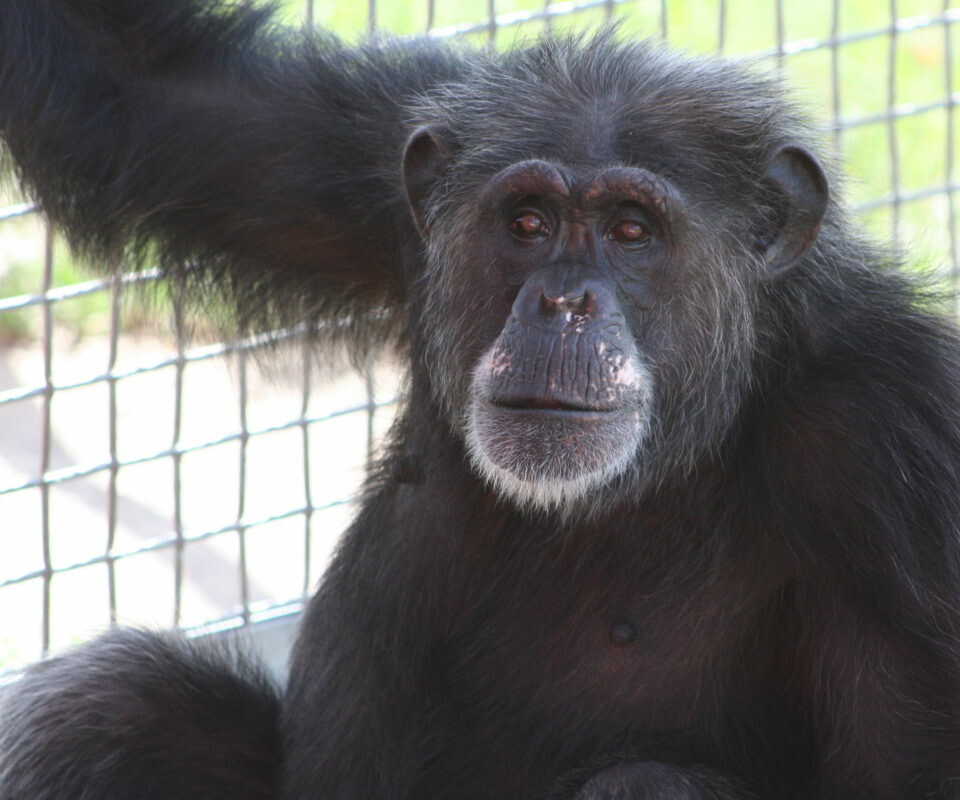 Hello, my name is
Alice

I was born July 24, 1983 and was taken from my mother Nova at birth. I lived in the nursery until I was 18 months old, when I was sent to isolation to be put on my first study. My records indicate I was used in one research study after another for the next 12 years.

When Save the Chimps met me I was living in a group with 5 other females my age. One girl, Christie never left my side and would even usher me to the outdoor cages so that we could enjoy blankets, toys, and enrichment. I was gentle and kind, but hesitant to go outside, try new foods, or take enrichment. I followed Christie’s lead and over time gained confidence, so with the support of my girlfriends, I joined a larger group. I became part of the group that was eventually named after me, and the staff marveled at how the chimps accepted me.

Perhaps the most wonderful moment came when I met the babies of the group, Elway and Pamela. At first I wanted nothing to do with these wild bundles of energy and mischief. But it didn’t take long for them to win me over. My caregivers sat with smiles on their faces and tears rolling down their cheeks as they watched me wrestle and tickle and laugh with the babies. No one had heard me laugh before. It’s possible I had never laughed in my life. They acted as though they were witnessing a miracle.

Since my arrival in Florida, my confidence has grown by leaps and bounds! I am often the first at the feeder for meals, no longer the shy girl who was afraid to take anything from the caregivers. I adopt stuffed monkey toys (that are eventually reduced to a tail, really) and share custody of the tail with my best friend Eboni. Best of all I have a big family who shares my island in Florida. Like all of the chimps at Save the Chimps, I will live happily ever after.

Save the Chimps History