Here is your chance to ask what you have always wondered!

Q. This is a question regarding a gorilla and an orangutan.  Would these two ever meet in the wild?  And if so— would they get along?  From Maureen via email

Good question. Gorillas are the largest primates in the world. Orangutans are the second largest. Both are great apes. However, what they share doesn’t go much past that. Orangutans live in Asia while gorillas live in Africa. Gorillas live in territorial social groups (usually with one adult male – a silverback – with a group of females and their offspring). Orangutans are mostly solitary. There is a good reason for this – orangutans are very large and live off of small high energy fruits that are widely spread throughout their habitat — causing long foraging journeys to feed a very large body. Gorillas, on the other hand, eat things like green leaves and basically live in a “salad bowl”. Therefore, gorillas can afford a large social group, whereas orangutans cannot. Because of this, orangutans avoid other orangutans (in fact, males have large throat sacks that they fill with air to emit a very loud call — alerting others to their whereabouts so they can avoid a costly confrontation. That said, to your second question, in the wild they would probably NOT get along.
Thanks for your question!

Q.  I was wondering what are some interesting facts about this chimpanzee and also what can I do as a 7th grade student to help this animal? From Stav from Brussels

Hi Stav. Great to hear from you! I’m so happy to hear about  your interest in chimpanzees and Chimpanzee conservation. I am currently at my site in Sierra Leone where we are trying to find ways to protect chimpanzees in habitats that are heavily fragmented – where chimpanzees must go into farms to find food in order to survive. The problem is that the humans in these areas need to protect their farms. Additionally, the chimps can be very dangerous to humans (they have injured and even killed people here in the past. This has led to a very hostile relationship between humans and chimpanzees. To make things worse, as the chimp habitat gets smaller, there are more and more interactions with humans – which almost always end negatively. I am working on ways to mitigate these conflicts so that the chimpanzees do not get killed at the hands of the local humans. To answer your last question, as a 7th grader you can do what you are doing – calling attention to conservation issues facing chimpanzees and educating those around you that chimpanzees are a species in their own right – a species that needs resources, social companionship, and a viable habitat to survive. They are not just little almost-humans that entertain us. To answer your first question, what fascinates me most is that chimpanzees are so resilient. They can figure out how to survive everything from an imperiled habitat (such as this one in Sierra Leone) to horrifying captive experiences (like some of the chimpanzees at Save The Chimps). Best of luck in you project and thanks for writing!

Q.  My twelve year old son is wondering what are the top predators of chimpanzee in the wild? And how smart are Chimps compared to humans? From Jonathon B. on Facebook

A. The top predator for chimpanzees are, unfortunately, humans. Humans kill wild chimpanzee’s for a number of reasons: some people eat them, some people use them in ritual practices, some people kill them because they are very dangerous and have hurt people in their community, some people kill them to defend their crops (chimpanzees often raid farms and steal crops). This situation has been exacerbated by deforestation across Africa, which has squeezed populations of chimpanzees into small forest fragments and pushed them closer to human villages. To answer your second question – chimpanzees, as I’m sure you know, are extremely intelligent, but I am always careful to try and not compare chimpanzee intelligence to human intelligence. It can be very different – equally complex, but different. For example, some studies have shown an even stronger memory and quick recall ability in chimpanzees. However, a chimpanzee will never be able to design a computer or a rocket. This doesn’t mean they are “less intelligent” – only that the way their brains function is different.

Q. It is clear that chimps mourn, but can they shed tears?

A. Though chimpanzees can produce tears, humans are the only species known to shed them emotionally.

Q. How many subspecies of chimpanzees are there? From Neil L. on Twitter

Q. How do wild chimps maintain their healthy teeth and gums?  From Clare S. on Facebook

A. Wild chimpanzees often do NOT have healthy teeth and gums. In fact, one of the things that chimpanzees at places like Save the Chimps benefit from is having access to stellar veterinary care. At STC, things like tooth abscesses and cavities are identified quickly and fixed. In the wild, these things can kill a Chimpanzee. It’s one of the reasons that chimps in captivity tend to have a longer life span. Having said that, it’s not all rotten teeth in the wild.  A wild chimpanzee’s diet does a great deal for maintaining healthy dentition. For example, out here at the site in Sierra Leone, the chimpanzees primarily subsist off of fruits with very large pits. When the chimpanzees eat these fruits they also consume and chew on the hard pits. The pits do a good job in scraping clean their teeth. Call it nature’s toothbrush.

Q. Do you see an evolutionary change in the wild resulting from our interference?  From Susan S. on Facebook

A. Great question! We are currently living in an epoch of time that ecologists and anthropologists have termed “the anthropocene” – which is a period where most life on Earth is affected in some way by the existence of humans on the planet (think of penguins that naturally live in southern South America migrating to the Antarctic peninsula due to warming ocean temperatures, then competing with the penguins that normally live in Antarctica). Wild chimpanzees have been extremely affected by the presence of humans – directly and indirectly. Due to deforestation across west Africa, chimpanzees have been squeezed in smaller forest fragments with high population densities. Frequently they live alongside human communities, and in turn, compete with human populations for resources. This has led to frequent encounters between humans and chimpanzees – a situation that usually ends badly for both parties. Many of these forest fragments do not have the nutritional components to support the Chimpanzee populations. However, in many cases, chimpanzees somehow figure it out! Chimps are “smart” enough to alter their strategies to survive in less than optimal environments. In the forest I am currently in, chimpanzees are nesting in the area of an abandoned village. In this area, they are nesting in large non-native fruit trees that were planted almost 100 years ago by the village. These trees give them an additional food source, a good nesting site, and an area where humans no longer go. It is this type of shift in strategy and behavior that is a direct result of human presence combined with Chimpanzee ingenuity. So to answer the question more directly, we see the evolution of ecological strategies in chimpanzees as a direct result of human presence.

Q. Are there matriarchal societies in the primate world? From Mark M. on Facebook

A. Yes, there are. Interesting examples are South American monkeys called Callitrichids (marmosets and tamarins). Instead of single offspring births, they give birth to multiple offspring  at a time. The mother is cared for by the males within the social group. In turn, she is dominant. Even chimp social groups have very dominant females that have a lot of pull within the group.

Q.  I’m wondering if chimps would eat junk food given the opportunity?  Anonymous

A. Most definitely! At Save the Chimps, we want to make sure that chimpanzees eat nutritious foods within a regulated chimpanzee diet. However, we also understand that, just like us, chimpanzees like to eat fun things as well. Because of this, we offer the occasional treat. To make sure that the treat isn’t more “junk” than”food”, all treats go through an approval process.

Q. Does the location of where a chimpanzee group lives effect what the group does or the tools they use? From Annie W.

A. Yes. There are a lot of studies geared towards looking at chimpanzee “culture” – basically looking at learned behaviors that are specific to a population. For example, not all chimpanzee groups will do “termite fishing” (termite fishing is a behavior first witnessed by Jane Goodall in Gombe – whereby a chimpanzee will strip a twig down in order to fit it into the holes of a termite mound – when they dip the twig into the mound, they are able to pull termite out and eat them). There are other examples of cultural too use as well – nut cracking with stone “hammers”, drinking water with a “sponge” of chewed up leaves, etc.

Something I have always been interested in is population-specific vocalizations. Chimpanzees in different groups will utilize different calls. There is a debate as to how significant this is, or whether or not these differences are due to learning, genetics, or acoustics. I tend to think that all three have some influence.

Q. Do you know what primate species is used in the snapchat filter? From Hallie on LinkedIn

A. I don’t know snapchat at all! Sorry – I am pretty old school. I still use a Blackberry!

Q. What do you do when bad weather events occur? Are the chimps brought into sanctuaries from the islands? From Connie W. on Facebook

A. Yes. Each island has a corresponding building with bedrooms where the chimpanzees eat their three meals a day (and many of them sleep). So getting everyone in for a storm is fairly easy – they are used to it. For Hurricane Irma, the chimpanzees all stayed inside. During some of the worst of it, I checked on everyone. Most of them were sleeping peacefully. Capone at Tanya’s building even seemed annoyed that I woke him up. 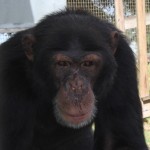