Almost 200 have had a long break from testing that dates to NASA’s early days, but that could end. 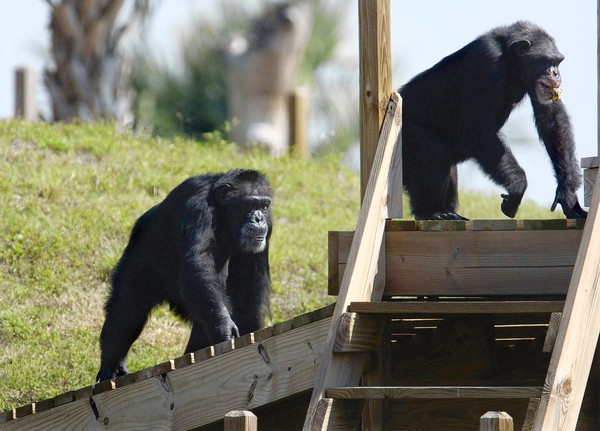 Two chimpanzees wander the grounds of the Save the Chimps sanctuary in Florida. Some fellow colony members, subjects of testing that dates to early NASA experiments, could end up back in the lab. (Eric Hasert, Stuart News / February 20, 2006)
Reporting from Albuquerque —

Ever since the first of their number arrived in New Mexico half a century ago as test subjects in the fledgling U.S. space program, nearly 200 government-owned chimpanzees were routinely injected with viruses and used to test everything from experimental vaccines to insecticides.

They have enjoyed a decade-long respite from research at an indoor-outdoor habitat on Holloman Air Force Base near Alamogordo, but now the government wants to move the chimpanzees to a Texas laboratory, where they might face renewed testing.

The plan has animal welfare groups and elected officials squaring off against federal scientists at a time when Congress is considering legislation that could shut down federal chimpanzee testing altogether.

Chimpanzees are our closest living relatives, sharing between 94% and 98% of our DNA, which is why some scientists see them as ideal research subjects. The similarity extends to their cognitive abilities. Chimps are intelligent and self-aware, even able to plan future actions.

Haederle writes for The Times.