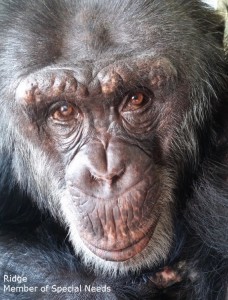 Save the Chimps is excited to announce that the US Fish and Wildlife Service has granted full Endangered Species Act protections to all chimpanzees, captive and free-living. This ends decades of “split listing” that allowed captive chimps in the U.S. to be used in research, entertainment, and the pet trade. Save the Chimps is proud to have supported the petition that led to this decision, and thanks all those who spoke out in support of this ruling.

Since 1990, under a special rule issued by USFWS, wild chimpanzees have been considered an endangered species under the Endangered Species Act, but captive chimpanzees were listed as threatened. This rule allowed captive chimpanzees in the US to be freely used in biomedical research, entertainment, and the pet trade despite their species’ status as endangered in the wild.   The Humane Society of the United States (HSUS), the American Association of Zoological Parks and Aquariums (AZA), the Jane Goodall Institute (JGI), the Wildlife Conservation Society (WCS), the Pan African Sanctuary Alliance (PASA), the Fund for Animals (FFA), Humane Society International (HSI), and the New England Anti-Vivisection Society (NEAVS), collectively submitted a petition in 2010 to the USFWS to end the split listing.

The new listing is expected to help put an end to the use of chimpanzees in medical research, entertainment, and the pet trade.

Thank you to all who signed the petition and are dedicated to protecting and helping both wild and captive chimpanzees.